Let’s start with our motivation. We probably all have certain fears inside of ourselves. Fears of other beings, fears of different situations. But especially when we’re afraid of other beings, or other people, if we look it’s because there’s an image in our mind of what they’re like. It’s a very solid image. We see them in a very one-dimensional way, not as complete people with feelings and many different aspects of their lives, and so on. Because we see them in this one-dimensional way then we tell ourselves a story about them, then we become quite afraid.

It’s very helpful here to expand our minds and see that whatever image we have cooked up about somebody is not the totality of who that person is. Everybody is very multi-dimensional. And within that, to see that there’s going to be a way somehow to connect with everybody. If we can see them in the multi-dimensional way–and we see ourselves that way also–we can find points of contact, points of commonality, points of interest, some way where we can communicate with them.

When we see that, we change our image of who we think they are, and also when we change our image of who we think WE are (because that contributes to the fear as well), Then when we see we can touch base with everyone, it gives us a lot more confidence to be able to go through life with less fear, less anxiety, and a lot more interest and curiosity about other people. This different view on others also opens the door to seeing them as sentient beings stuck in cyclic existence under the power of afflictions and karma, and to seeing them also as beings who have contributed to our welfare at some time in the past. So this, too, opens the door to seeing them in a different way: feeling more connected to them, even to the point that we can’t think of working for their welfare, considering that we’ve had the fortune of meeting the Dharma.

Let’s cultivate an open-hearted attitude of compassion towards everybody, and have that bodhicitta motivation in relation to all of them, and use that as our motivation for sharing the Dharma together this evening.

I was thinking about that motivation just a little bit. I was thinking about that because I had watched the video (I sent the link around to all of you) about Charlottesville, and this one young woman who’s incredibly brave interviewing some of these neo-nazi white supremacists, and watching my mind. It’s like I have a view of what they (look like). They have a certain physical appearance: big, beard, baseball cap, glaring eyes, and armed. My image. And watching how the mind has this physical image of them, and then immediately it’s like I know everything about that person. They’re like this and they’re like this and this and this. And I’m afraid of them because they’re uncontrolled. They’re armed and they’re uncontrolled, and I have no power. All of this comes up like a flash. I don’t know about you when you think about them, but this is what happens for me. And then see myself in a certain way, too. It’s like, I’m nowhere near their size. They win automatically. They can outshout me, they can do everything, so this feeling of powerlessness comes. Then, with that, fear. And seeing how all of that is just existent in my own mind, beginning with imagining how they look and then who they are and how they are and who I am and how I am, and then the relationship is frozen in this way.

We do that with everybody. We can live with somebody, too, and we have an image of who they are, and we always approach them that way, and so it always turns out to be the way that we approach them because that’s all we can imagine.

This is where I find Dharma being very helpful in terms of “well that person hasn’t always looked like that.” They’ve once been little babies. Or cute little kids. Or in previous lives maybe they’ve been bugs or kitties or who knows what. They haven’t always been that. And then also, not only loosening my perception of them, but also loosening my perception of myself.

And I think this is where deity yoga comes in. If I imagine myself dissolving into emptiness and appearing as a deity, if I’m Yamantaka I have a whole lot more self-confidence. Or even Chenrezig – peaceful Chenrezig. Because you know a buddha isn’t going to be afraid of some white supremacist.

Just a little tidbit to think about, in case there are people you’re afraid of, or people that you react to instantly.

Many different situations I see how this comes up. One time when I was speaking at Marquette University, I was speaking to a classroom. One student walked in: tall, blonde hair, blue eyes, pinstripe shirt, walking with a confident…. You know how they walk, with confidence. Sit down, crossed one leg over the other… And immediately, just by the way he looked and the way he walked in I went, “Oh god, some spoiled rich kid who thinks he’s at the top of the world, and won’t listen to anything.” I just looked at him and instantly I knew everything about him. And I thought, “Oh god, I’ve got to give a talk to this class and this kid’s going to be glaring at me the whole time because he’s just so conceited, full of himself.” I had seen him for 10 seconds, maybe.

It’s just interesting. I don’t know if your mind does this. Anybody else’s mind? Forms instant opinions. And that’s what it’s going to be like. And then to watch…. As I gave the talk his body language changed and he actually became interested in the talk. I thought he was just going to be sitting back there with his legs crossed, leaning in his chair [makes a face]. But he actually listened to something and became interested. Totally blew my preordained, one-dimensional image of who this kid was.

I think some of you heard me tell the story of when I went into San Quentin and I was giving a talk there, and some young kid…. The lifers say the young ones are the worst because they’re going to get out so they’re just [negative]. So for some reason he came to the talk, probably just so he had something to do to get out of his cell. So he came in, you know how they kind of walk with this stride…. The gang member stride. Walked in, sat down, [crossed arms, scowl]. Right before I gave the talk: “Okay cracker, what do you have to say?” This is what I’m reading into the whole thing. And again, I gave this talk and slowly his whole body language changed. So out the window went my one-dimensional fixed view of who I thought he definitely was.

It’s very interesting to watch this in your own mind and to really see how these preconceptions come up, and they’re prejudice, aren’t they? The white supremacists aren’t the only ones who are prejudiced. I’m prejudiced, too, against them. But prejudice is prejudice, isn’t it? Doesn’t matter. Because it just sets you off communicating with somebody. So, interesting to watch how the mind creates these kinds of things, and then how we believe in them so much and limit ourselves based on these kinds of preconceptions. And how just trying to see the other person in a different way, see ourselves in a different way, then we can find–in our own mind–the space to communicate with them. There may be lots of space to communicate with them. We can’t see it because we’ve put this image on them. And on ourselves.

You can also see in this way how when we develop a certain image of ourselves as a very one-dimensional being: “I am like this. I can’t do that.” Then how we likewise limit ourselves and we don’t try to do things in a different way because we’ve already told ourselves we can’t.

These are the kinds of things that really get in the way of our progressing spiritually. We have very rigid minds. Very rigid, our way of thinking. 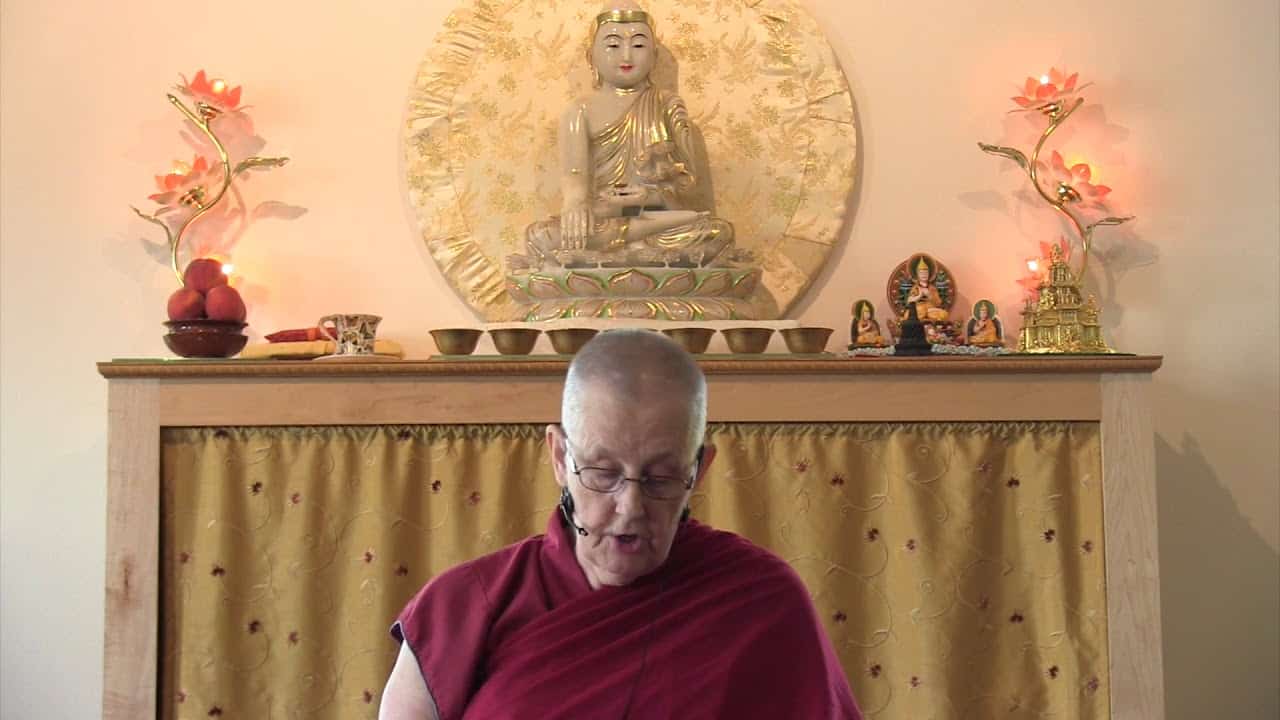 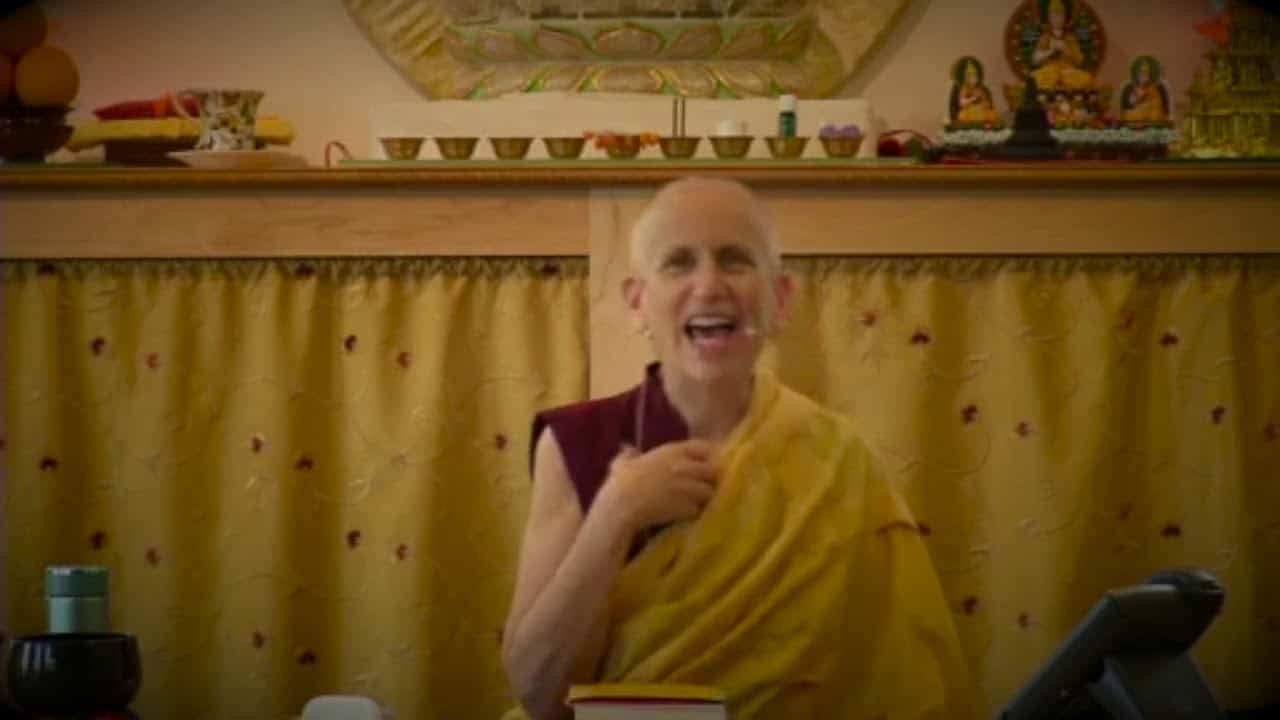