Who are most respected of all beings that exist?
The excellent ones with wisdom not mistaken about reality.

And, “Who is the best speaker of all strong beings?” Again, not somebody who just pontificates and spreads whatever kind of thing he’s saying. But it’s those who have listened closely to a vast range of teachings on enlightenment.

And then here, “Who are the most respected of all beings? The excellent ones with wisdom not mistaken about reality.”

When we say, “Who are the most respected of all beings,” our minds usually go to worldly respect. Well we respect so-and-so because he has power, and so-and-so because he has money, and so-and-so because they do different things. Sometimes we respect people who do really wonderful social engagement work, or people like Mother Teresa who worked for the poor or the injured, the ill. So we have respect for those people as well. As well as for… Really, who gets the most respect? The great athletes and the movie stars, who are not the most happy beings at all. If anything it’s the opposite.

But here, who really is the most respected by the wise—maybe not by the whole world, but by the wise—are people who have wisdom that understands reality. Why? Because when we have that wisdom then we can overcome our disturbing emotions, and then our attachment and anger and jealousy and conceit and all these things don’t torment us so much. We have better relationships with others. They say, “we conquer” these afflicted minds. That’s why another epithet for the Buddha is “the Conqueror.” Because we’re conquering these afflicted mental states. And that’s done through the realization of the emptiness of inherent existence, which is the reality of all phenomena.

Sometimes in our lives we feel like, “Gee, I’m not very well respected. People should respect me more.” Do you ever feel that way? Like, “how come they respect that person and they don’t respect me? I’m better than they are.” But then when our mind gets like that we should ask ourselves if we have the realization of the ultimate nature of reality or not. [laughter] How deserving of respect are we? Because actually when our mind is craving respect our mind is under the influence of afflictions. And an afflicted mind is certainly not respectable. So, often the mind that is complaining, “Oh, I’m not respected enough, I’m not appreciated enough, people don’t acknowledge my good qualities enough.” That mind itself, when we look at it, is one of the reasons why we’re not respected and appreciated. Because that mind is quite a self-centered mind of afflictions. And so at that point we should remember that when we have the mind that understands reality, when we have the mind of bodhicitta that has love and compassion and an altruistic intention for all beings, then that mind becomes respectable, and the person who has it is a respected being. But of course that person, at that point in his or her journey doesn’t really care very much about being respected. When you’re really working for the benefit of others their respect for you doesn’t really matter. It matters only in the sense that by having a good reputation it enables you to work for the benefit of others more. But for your own sake, being acknowledged, being respected has no meaning whatsoever.

And the same goes for people who have a deep understanding of emptiness. It’s like, what is others’ respect and appreciation going to do for me? It doesn’t get me to full awakening. It doesn’t fulfill any of my deepest spiritual yearnings.

And even we now can understand that when we think of what’s most important in our lives, and our spiritual yearnings. How does being respected and having a good reputation really further those? When we’re attached to those things it doesn’t further our deepest aims and aspirations. So we should instead set our minds on gaining bodhicitta and the understanding of reality, and then not worrying so much about whether people like us, appreciate us, acknowledge us, respect us, love us. We can give all of that kind of stuff up because it’s not really meaningful in the long term.

[In response to audience] The story? Well, I just remember when I lived in the monastery in France I thought, “I want to be a good example for others.” And so I tried to be a good example and I didn’t understand why they all didn’t respect me and like me. And that made me quite upset and angry. And then I realized when you’re trying to be something, you aren’t that. Yes, I have to try to act well for the benefit of others, but not so that I can earn respect or so that others will look at me as being a good example and praise me. Because when there’s that kind of sneaky motivation then it sabotages the whole thing. Then you aren’t genuinely that. You’re kind of faking it. And of course other people don’t respond to faked things. Or they don’t respond as we would like them to.

[In response to audience] Yes, you get criticized whatever you do, when you’re trying to be a good example, because people misinterpret it.

So when others don’t view us in the positive light that we would like to be viewed in, first we have to look at our motivation. And then we also have to look at what have we done that might make them not respect us and see us in such a good light, and do some purification of those things. So instead of complaining, “others don’t appreciate me, others don’t respect me,” to do some purification of the causes that we’ve created—either in this life or in previous lives—that would lead others to not have that kind of positive view of us. Because that kind of thing doesn’t come without causes.

[In response to audience] Oh yes, when we’re trying to become a good example there’s low self-esteem. (Like, I’m not really so good so I’m going to try and be good.) And then also pride is mixed in because then if I can be a good example then I can [puff up with pride]. That’s where the fakeness comes in. 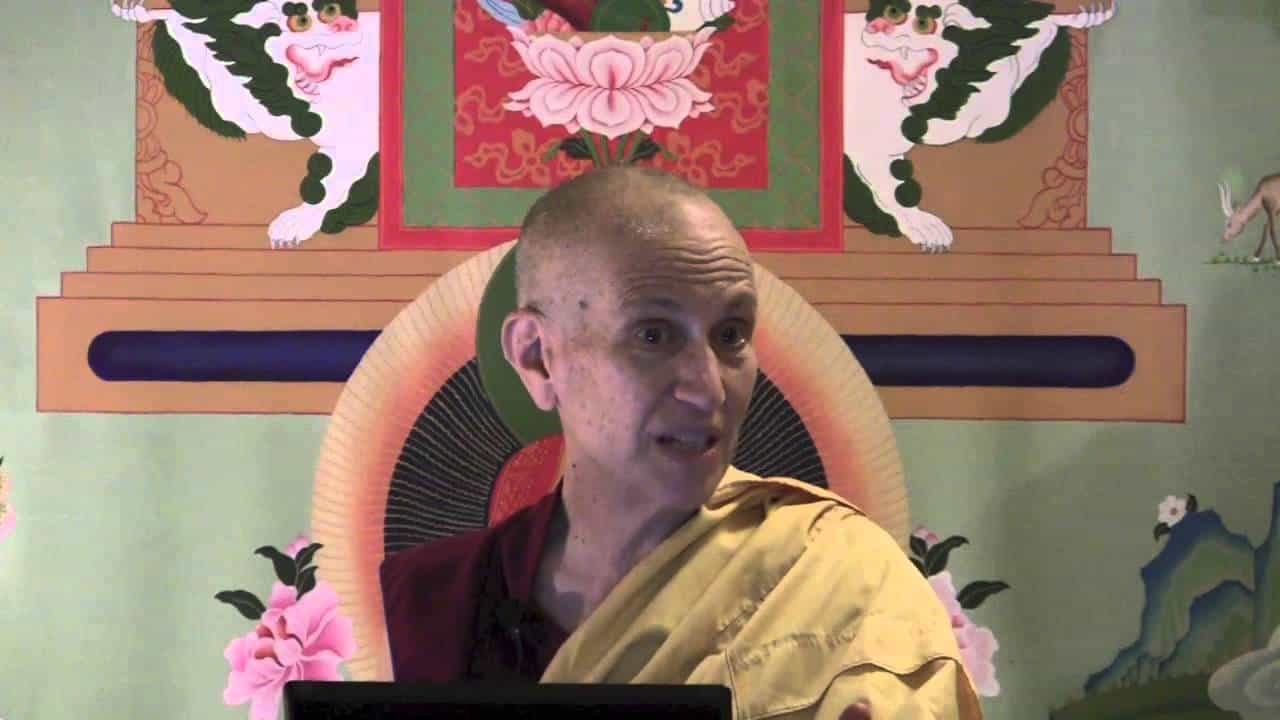 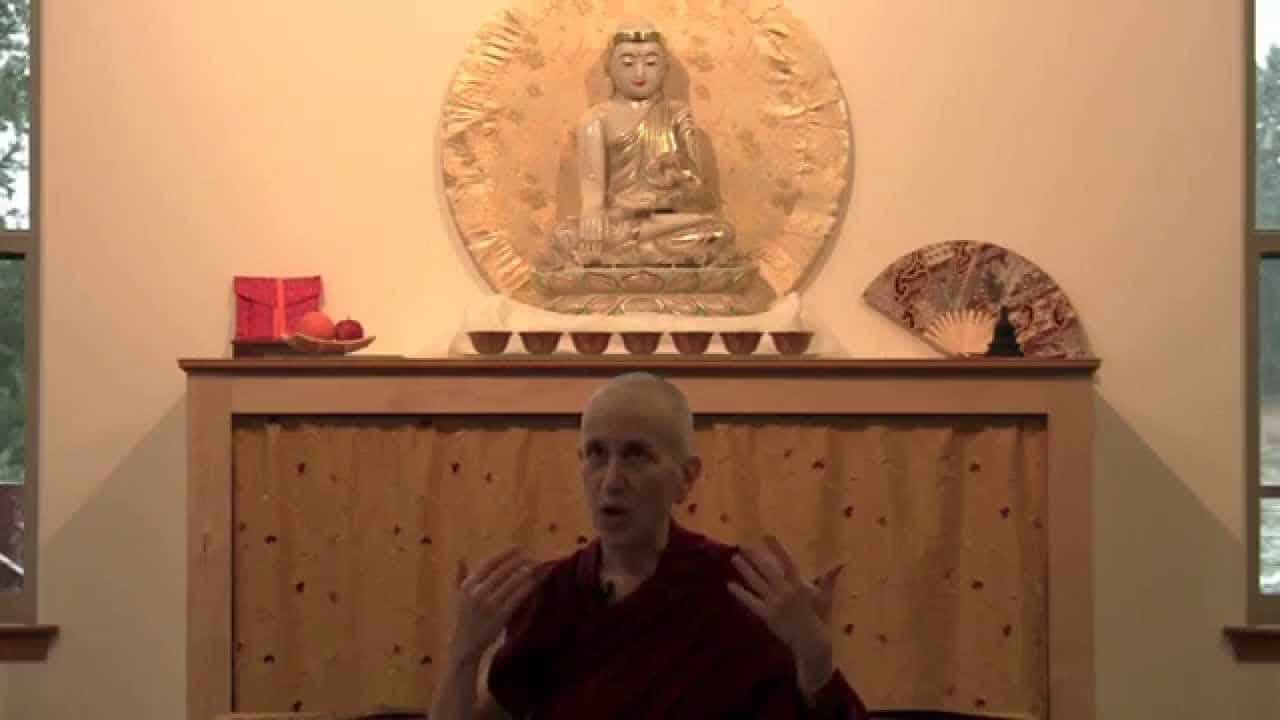