Please watch the video with Susan Otto before watching this video.

I was going to talk about Janis Joplin, but she’s getting bumped.

Susan (Otto) called and the clemency was denied for Don Wackerly. (One of the men on death row that we correspond with was having his clemency hearing today.) And [Venerable Thubten] Jampel was there to testify for Don. Susan said he did very, very well. Not only in expressing himself for Don’s benefit, but also when the clemency board said that it wouldn’t grant clemency, Jampel said to Susan “this is a tremendous opportunity for us.” And I asked her what that meant. And she said that he spoke about how this is karma ripening. Don clearly has some very powerful karma that would cause him to be executed. And Jampel also spoke about the karma created by the people on the parole board who can just discard somebody’s life like that. And that those people really need our compassion, and so does the initial jury, so do the executioners and the warden and so on. So it’s a big-time opportunity to generate compassion.

What was interesting … I mean, I asked Susan how she was, and she said, “Not surprised.” And I’m not surprised either. Jampel was telling me that his mother who lives in Oklahoma has said that there’s been press about this and another execution that’s coming up—because they don’t have the drugs yet. Well, now they do. And the people, the population is, you know, “well, we should kill these people. They’re murderers, we should kill them.”

And even one of the people on the parole board who was a judge said to Susan—because she brought up the thing that this should have been tried in federal court, because it occurred on federal land—he said “this is Law 101.” And the judge said, “Why didn’t the initial lawyer do something about this?” And Susan said, “I don’t know, but why should Don die because of an error that his lawyer made?” And even this man voted against clemency. And so it’s like I think they’re all terribly afraid of the repercussions throughout the state if they gave clemency because they may want it but then everybody in the state who is for the death penalty, and they think the death penalty’s going to do some good— Although, if the death penalty did some good we wouldn’t have so many murders. But who stops and thinks before they’re ready to kill somebody, “Oh, I could get executed for this.” You know? In the heat of the moment nobody thinks that.

So Don … We’re going to really have to support him. He’s been away from his practice for the last week, as you can tell if you’ve read the letter downstairs that I left there. And he really needs to come back to his practice.

Jampel also talked about—which interestingly I’d just written to Don—is that all the time we spend blaming and lamenting is useless, that we have to deal with whatever causes and conditions there are. And if those causes and conditions change, then we have to deal with the new ones. And then going back and blaming the past and wanting to change what can’t be changed is just wasting the present.

So I was really proud of him, to hear that he spoke like this.

It was also very sad that the victim’s family was there, and Susan spoke to them, to the older son. They’re Laotian. And she said, “Don did not kill your father.” And the guy said, “Who did?” And she said, “I cannot say. But Oklahoma has the man and is going to kill him.” And the son said, “Well, we just want this to be over and we trust the law.” And then interestingly … I mean, you can tell how much the family is hurting. They have to find some way to make sense of all of this in their own minds, and so that’s how they do it. And apparently that family would not meet Jampel’s eyes. He went over to talk to them and all, but they kind of really didn’t want to engage with him. They had given their father a Christian funeral. So my guess is they had been brought over from Laos to Arkansas by a Christian group and had converted due to that, and as many evangelicals do, they tell Asians that Buddhism is backward and so on and so forth. So my guess is that’s why they wouldn’t interact with him so much.

But he also spoke to Don’s sister, who was there. And Don’s aunt and uncle. And that was very good. And I think Diana, the sister, was very very happy to meet him.

So tomorrow they are filing a federal case for a stay of execution because of this whole mess-up with the drugs. It’s hard to know if they have the proper drug that is the first one—the barbiturate—that supposedly knocks you out before they inject the second drug which is the one that paralyses you and stops your breathing. And then after that they inject the third drug which stops your heart instantly. So she’s going to file a federal case because when she talked to the warden and the department of corrections what they were saying about the drugs was completely like they were going to make it themselves or something. They borrowed it from Arkansas. I don’t know. So I don’t know all the details of that.

But otherwise, she’s going to talk to the prison authorities and see if Jampel can be in the execution chamber with Don, because I think that would be very, very helpful for Don. You know, Don does not have much control over his mind. And he’s going to need somebody there who’s telling him exactly what to do and what to think. So I hope that works out.

I think we should continue on and with lots of prayers and compassion for the jury, for the judge, for the ex-wife who … who knows what’s going on with her. For the people on the parole board. For the governor. For the warden. For the people who insert the lines and the people who pump the drugs, and the whole thing. And especially for Susan. She has gone well beyond the call of duty as an attorney for a client. She’s just been totally amazing. And I told her that. She said thank you. So I’m thinking it might be nice if we wrote her a card. Because I don’t think, you know, attorneys of death row clients get many thanks. And she’s quite an exceptional person, as you saw when she was out here.

May this be a lesson for all of us about karma so that we pay attention to our actions and don’t think that any karma is just too small to matter about. It may not be a big action when we commit it, but if we don’t purify it, it can continually increase. And also recognize that, similarly, small actions of virtue can be very powerful, so we shouldn’t get lazy about doing them. 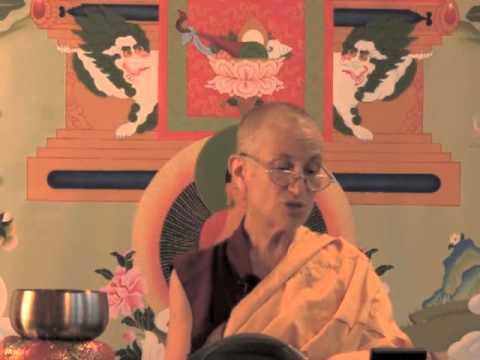 Mindfulness of the body 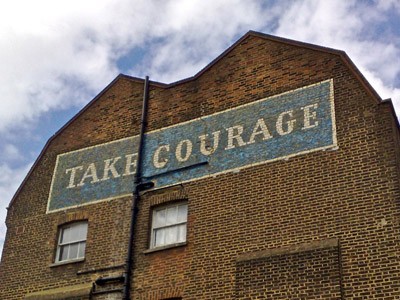