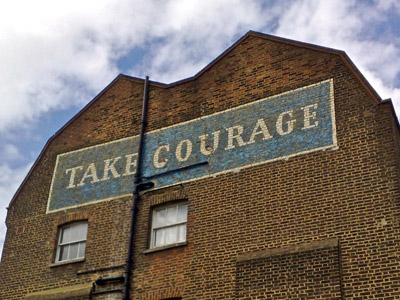 What is the relationship between courage and attachment to the eight worldly concerns? (Photo by S Khan)

I have continued to think about courage. What is the relationship between courage and confidence? I think confidence is necessary in order to have real courage. We have to believe in ourselves, in our abilities, in our potential. For example, while we’re on the path to enlightenment, if we lack confidence in ourselves we may not have the courage to face ourselves and overcome our selfish habits.

What is the relationship between courage and attachment to the eight worldly concerns? If we don’t have courage we will never be able to deal with the hardships that arise when we turn our backs to our usual way of thinking. Others may not understand and even tell us we’re crazy. This would be unbearable if we were living our lives in search of praise and respect. But with courage and confidence we can live a different way and then not have to be afraid of being criticized, not being liked, experiencing discomfort, losing our valuables, and so forth. The less we grasp at the eight worldly concerns, the less we have to be afraid of. I know that ever since I have been married (not that I don’t love it!) I have experienced more ups and downs, more fear and worry. The reason is I have been grasping at my new family as the ultimate source of happiness. They are a source of joy and happiness for me but because it’s a dependent arising, it can change at any moment and that can be scary, very scary.

What is false courage? False courage is based on afflictions such as anger. Also there is a false courage that arises due to lack of honest introspection. We may believe we will be fearless in the face of death or be capable of being unbelievably compassionate when a situation calls for it, but when we have the opportunity we chicken out, worrying, “Others might see me and think I am soft.” We convince ourselves we shouldn’t act. But it’s not because we aren’t brave enough to do the necessary action, it’s because we aren’t brave enough to set our attachment to reputation and image aside. I remember one time and it was breakfast time in this prison. At the milk dispensary a fly was swimming around in the milk that had leaked out into a pan. I saw it and wanted to scoop it out, but I was afraid of what others might think so I left it there. I went to sit down and was at war with myself. Eventually I went and saved the fly. Of course no one was even paying attention to me.

What kind of courage does a bodhisattva have? How can I develop my courage to become like that? I think bodhisattvas have a courage based on renunciation, bodhicitta and wisdom. They are focused on benefiting others not on themselves. They are not grasping at things and people as independently existent, so they are more relaxed and natural, not afraid, worried and uptight. In order to have courage like them I have to keep trying to develop realizations of the three principal aspects of the path.