A death row attorney on her work

The power of the Buddha’s teachings to transform the heart

Attorney Susan Otto, a public defender from Oklahoma, represented Donald Wackerly II, a man on death row who corresponded with Venerable Thubten Chodron. Don was executed on October 14, 2010, just one month after this talk.

I’m very happy to be here. My name is Susan Otto and I am an attorney from Oklahoma City. I’m representing an incarcerated person on death row, Donald Wackerly II. Donald is set for execution on October the 14th in McAlester, Oklahoma.

It’s a very sad thing to be representing Don, in one way, because I had to know when I started this that it would be very likely that I would be witnessing his execution at some point, and that I might be one of the last people that Don would see in this world.

The first time I met Don on death row I happened to be wearing a small locket that’s a double vajra. I can’t really say that I’m a student of Buddhism because that would be, I think, grossly overstating my level of understanding, and my opportunities for learning have been somewhat limited by where I live. There are really no Buddhists in Oklahoma, and I don’t have a computer at my house, so unfortunately I haven’t been able to do a retreat from afar or to receive teachings from the Web. (I’m sort of reconsidering that “no computer” rule at my house after this.)

But I’ve read a number of books over the years and I’ve tried to study. I’ve been fortunate enough to go to Bhutan, where I was exposed to a society that’s based on Buddhism. So, that was the reason I had the double vajra on. And on the other side of the double vajra is a symbol of Kalachakra.

And I had been talking to Don about legal things for several minutes, and Don just pretty much kept staring at me and staring at me, and finally he looks at me and says, “What’s that thing around your neck?” And I said, “Well, I think you know what it is.” And it does look sort of like an ornate cross, in a way, if you look at it just right. And he says, “Well, I’m a Buddhist.” And I said, “Well yes, I know.”

And so we started talking about Buddhism from there, and it became very obvious to me that this had completely changed his life. That he simply wasn’t the person that he had been. And he was no longer going to be that person, ever again, if he was allowed to live.

When I began the process of trying to put something together, that I hoped would be persuasive, to save his life, I realized that it would be absolutely incomplete if I did not come out here and meet with Venerable Chodron, who was so gracious to invite me. And to try to capture something about what Buddhism means. What it has meant to Don, and what it can mean to anyone who is able to truly accept the teachings.

Don lived a very dangerous and selfish, self-centered life, as many people do. There are lots of reasons why that happened. Some of them are completely attributable to Don, and he accepts responsibility for those. But some of those were just a chain of unfortunate circumstances. We can’t really be held accountable, I don’t think, if our parents treat us badly or don’t raise us properly. And all of those things contributed to the circumstance that he found himself in.

I think one of the most important things about all of this is that if Don dies on October the 14th, I want him to die knowing that his life had meaning. That even if he was not able to show that he could practice the Dharma—he could practice what he’s learned—in a larger context, that he still matters, and that it matters that he lived, and it matters who he was, and who he is.

This is a very extraordinary place and the people who live here are extraordinary. I don’t know if you fully appreciate how extraordinary it is to live in a community where compassion is your whole motivation. I can tell you, I live out there, I don’t get to live here, and out there there’s not much compassion. Out there, there is a lot of pain and there is a lot of suffering. And there is so, so, so much ignorance about why that suffering occurs and continues to occur.

I’m not qualified to teach anybody about anything, really, but what I would like to say to all of you, and to anyone who comes in contact with these extraordinary teachings, and the people who keep them alive here in America— I don’t think we’ve ever had a time, ever, when we have been in such a precarious position. There is so much anger, on the one hand; so much hatred, so much fear, so much nonthinking that goes on before people react, that to have this place and these teachings existing to counteract that; and to try to teach people the importance of thinking and feeling—both thinking and feeling—before acting, I think is the only hope we have that we will be able to change and we can stop this terrible cycle of pain and suffering.

Don thinks of all of you as his family. He is deeply grateful to every one of you for all of your support that have given him. I know that you will keep him in your thoughts. And I will send his thoughts back to you in the most effective way that I possibly can.

I want to thank you so much for helping Don, and for helping me with Don. I’ve been a lawyer for 35 years, I’ve witnessed the execution of 11 of my clients. This will be my 12th execution, if it happens. The worst ones are the ones where people die in fear and anger. And I believe that Don will be spared that, even if his life isn’t spared. I can’t thank you enough for that. It is such a blessing and such an important thing.

I hope you all prosper in every thing you do. I hope this place stands for a thousand years and just gets bigger and bigger. And who knows, maybe it will be like the pebble that drops and this wave of compassion will somehow overwhelm us, and at last we can learn to live in peace with each other. I thank you all so much.

Read about Venerable Thubten Jampel’s visit to Donald Wackerly and attending the execution. 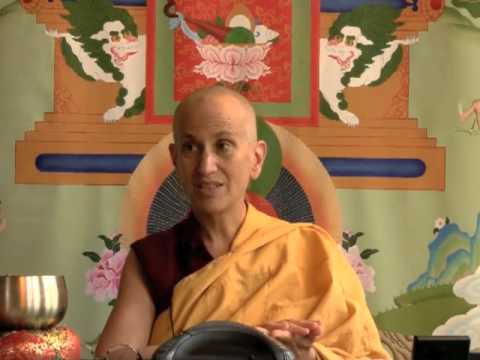 The two manners of meditation 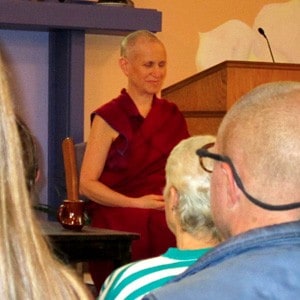 A commentary on “The Rose”