So just to continue with this theme of how we put people in categories and discriminate against them and think that our opinion of other people is the reality of who they are and through that generate a lot of hatred and prejudice and bias. We’re going to continue that theme which we have been talking about.

It is quite interesting to investigate how somebody becomes our enemy, okay. Because our normal way of thinking is: somebody does something really awful and they’re an awful person and anybody who looks at them sees that they’re an awful person. And so, therefore, it is completely justified in saying that they’re an enemy. Objectively, they’re an enemy out there because objectively they are some kind of awful person out there. But if we look and really examine how does somebody become an enemy? Because when we were born everybody was neutral, right? We didn’t know anybody when we were born. Then slowly our discriminating mind started pointing out people that we considered friends because those people were nice to us. Then other situations we didn’t like so much, so anybody associated with those situations we called enemy and we had hatred for. And then everybody who just didn’t affect us one way or the other, we just plain old didn’t care about. And so you can see that this discrimination into friend, enemy and stranger grew to our own mind—discriminating, classifying people.

And so when we really see how we put people in friend, enemy and stranger class, when we really contemplate it deeply, we see how totally myopic it is, how totally subjective it is. And also how somebody can go from one category to the other category just by a few words here and there. Somebody might be a very dear friend and then they say something you don’t like and then, whether it’s temporary or forever after, you throw them in the enemy category for a while because you’re mad at them. Then sometimes there’s an enemy who you meet in a different situation where you are really dependent upon that person and they come through for you. Or you meet somebody who’s an enemy and they happen to have an opinion that you agree with so now they’ve become a friend. So when we really see it, this discrimination is totally based on our subjective, self-centered mind, which is not really a valid criteria for establishing people as friends, enemies and strangers and for generating attachment, you know, disregard and hatred in response. It’s just not very good categories.

And the problem is that we think that how somebody appears to us is who they are from their own side. It’s not. We’ve noticed one behavior, interpreted it in a certain way, assumed that the sum total of who that person is, is that one behavior and then used that as a rationale to hate them from now until eternity or to fear them from now until eternity. And it’s really ridiculous and causes so much suffering, doesn’t it? So much suffering. And what’s very interesting is, if we notice a bad quality in somebody— If their bad quality is aimed at us, like let’s say there’s somebody who talks behind people’s backs and criticizes them behind our backs, so if that person over here, has this habit of criticizing people behind their backs, if they criticize me behind my back they are an awful person. I mean, they are just disgusting. If they criticize my enemy, another enemy I have, behind their back … [then they’re] smart. Good golly, you better let everybody know how bad that other guy is. So you see, even this quality that we see in somebody else, whether we see that quality as good or bad, again depends just on our own subjective self-centeredness.

So, something quite powerful to think about here, hmm? I think that’s actually what makes it so powerful is, you know, if there are people who kind of … Our mind, without even knowing them, says, “Oh, they’re terrible people, they’re enemies, they think like this and this.” To actually make an effort to go and get to know them and talk to them and then you may find out they’re completely different, you know, and that all that other stuff you have been spinning around is just created by our own mind. 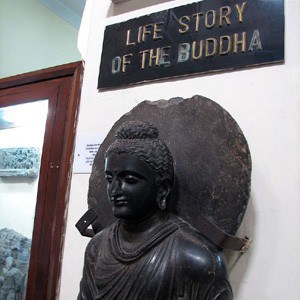 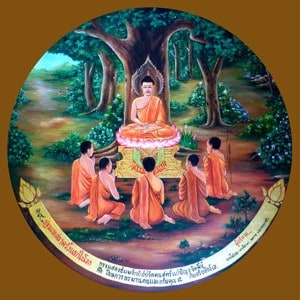 The Buddha’s life as an example