Hate is not conquered by hate

Hate is not conquered by hate

Okay, so to continue with yesterday and the fears this person expressed, it reminded me of one of the very well-known verses in the Dhammapada. I probably won’t get it exactly. But it’s something to the effect of that, “Hatred is not conquered by hatred. It is conquered by love.” Okay? So this is the primary teaching in Buddhism. Now the person who wrote the letter, of course, knows that, and he wants very much to eliminate his hatred and anger as well as his fear and suspicion. And so for that reason you know, asked the question. So, you know, specifically he’s focused on the Muslim population increasing and thinking that all Muslims are radical people who are verging on terrorism, which is, of course, completely wrong. You know, the people who become terrorists misunderstand their own religion.

Turning the mirror on ourselves

Now of course, one of his things was that if you look in the Koran, you also find violent statements. But you also find those if you look in the Bible, don’t you? It’s not like the Bible is violence-free. Certainly not. So I feel that it’s very important, whenever we find something that we want to criticize in other people, to first turn the mirror and look at ourselves, on our own culture or our own way of viewing the world and see, to what extent, we have those. Clearly his mind is also making, you know … not only grouping all these people and thinking they’re all identical, which of course is not true, but you can really see how the grasping at true existence works here. You know, this is what somebody is, this is all they are, all they ever have been and the meaning of this person’s life is one attribute, which, in this case, is even an attribute that is falsely imputed to that person. Okay?

How to change our perception

So how do we get around this? I find one thing that’s very helpful when my mind is stuck in a very solid image of a person, whether that image has anything to do with reality or not, is to remember that that person hasn’t always had those qualities. They haven’t always been like that. And so in this situation, thinking that not only all Muslims in general—that even those who misunderstand Islam and become terrorists—haven’t always been like that. It’s not like people came out of the womb that way, with a whole set of political beliefs. And I find it very helpful here to go back to the Buddhist teachings on seeing all sentient beings as having been our mother. Or even all sentient beings as having been our child. Because I used to practice this with George Bush a lot and thinking of him as a baby, that he was once a baby. And whenever we see babies, babies are adorable. They’re so cute. You want to play with the baby, except of course, when they’re screaming. Then you give them back to mama. But you know, before that, you say, “Oh they’re so cute. They’re so wonderful.” And they seem so innocent. And so to remember, whether we’re thinking of George Bush or Osama Bin Laden—or whoever it is we’re suspicious and fearful of—that they were once a baby, they were once something that we saw as very cute, very adorable. And that whatever trait it is that we don’t like in them, or whatever trait that we’re imputing on them that’s false, that’s not who they are, that’s not the sum total of their life. Okay?

And this is something that I’ve had to do again and again in the prison work, where people are imprisoned over one action that they’ve done in their life. Society reacts in terror of them, thinking that this person has no good attributes and nothing to offer. And yet, it’s only based on one event in their life. And our lives are not the sum total of one event. So how would we like it if people evaluated us or judged us based on one event in our life, particularly the most harmful thing we ever did? So we can see we wouldn’t want other people to isolate one characteristic, glom on to that and think that that’s who we inherently, unchangeably are. And so, in a situation like this, where he’s afraid of a whole group of people, first of all, to realize that not everybody in that group has the attribute that you’re projecting; and second of all, that even if somebody did, it’s only one element in their entire personality. And that everybody has some kindness in them. I think this is quite important. And I know for myself that whenever I make an effort—like if I’m feeling ill-at-ease around somebody—I make myself make an effort to go and talk to them, because I know if I don’t, I’m just going to sit there and stew in my projection and make it stronger and stronger. If I go and talk to them, I see a human being in front of me. I see somebody who’s just like me in front of me. And that clearly means that I can’t hold on to that view that they’re an inherently existent awful person. Okay? 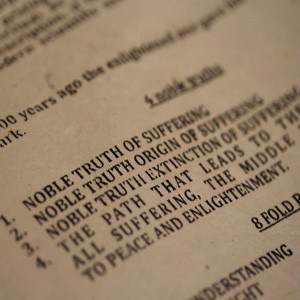 Motivation in a monastic environment 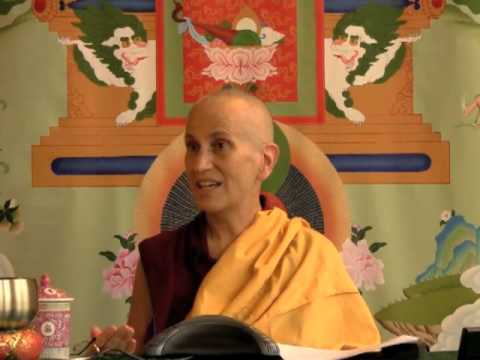