Yesterday we were talking about:

“May all beings win the bliss of a Buddha.”
This is the prayer of the bodhisattva when seeing someone happy.

The bliss of the Buddha. We hear that term and we go, “It sounds good, but what does it mean? What in the world does it mean?” When we look at it, all we know is our own experience, and our own experience is completely infused with ignorance and afflictions. That’s the meaning of the word “tainted” or “polluted” or “contaminated.” When we hear of this untainted bliss: “What in the world is that?” Maybe that’s one reason why they say it’s indescribable. [laughter] But you know, it is. It’s beyond our concept and it’s beyond our experience but we need to have something through which we can get some idea of what it must be like.

This is the way I personally think of it when I get too, “What in the world does great bliss mean?” I start out with, “What will it feel like, for example, not to get angry?” And I just sit and imagine that. Anybody could say anything they want. You all could do everything I don’t want you to do. The whole world can do everything that’s wrong, because it isn’t what I want and I’m not going to get angry. When I think about that, what that might feel like inside—to have not just the not getting angry, but the security that I’m not going to get angry, and not even having to fight off the anger and apply gazillions of antidotes, but just the fact that something happens and the mind doesn’t even go in that direction but it instead goes in the direction of compassion—when I think of that, then that gives me some sense of how it must be to be a buddha.

That clearly isn’t the Buddha’s great bliss, but it gives me some sense of how being a buddha is possible and how it’s different from what I’m experiencing right now. Otherwise it’s hard for us. We think of buddhahood and since we only know our experience we just try and think of buddhahood as a revision of our own experience. In other words, buddhahood is you finally get whatever you want. [laughter] That’s what heaven was. When you’re taught as kids, heaven was you finally get everything you want, which means everybody does what you want. But that’s not the point here. The point is the change in the mind.

Or you think of attachment—craving, the mind of clinging desire—and you think … that just doesn’t exist in the mind. Now what would that be like? You can encounter any kind of object—you could see anything, hear anything, touch, taste, smell anything, think of anything—and your mind just remains peaceful. It doesn’t go into this thing of, “WOW, i want this, how am I going to get it? Oh, I do that to get it. Can I do this to get it? But then I might lose it. And maybe it wouldn’t come to me. Or it’ll come to me and it’ll leave me, or it wouldn’t like me.” All this stuff that comes because of craving. Just imagine that in any situation in your life, craving just does not come up. Just try to imagine.

This is a real good thing in our meditation, just try and imagine what would it be like not to have craving, to have your mind just be completely peaceful. These things come in, they’re there, they leave, they’ve left. Your mind’s just peaceful. Whatever comes you enjoy. Whatever doesn’t come you enjoy. Your mind isn’t continually trying to rearrange the duckies and get new duckies. The mind is just content. Whoever you’re with, you’re happy. Whatever your living situation is, you’re satisfied. You just look at that. This is just some way that— it’s not the buddha’s great bliss—but it’s some way for us to get an idea that’s related to our experience of what it must be like to be a buddha.

When we’re wishing that all sentient beings have the bliss of a buddha when we see them happy, we’re really wishing something that’s quite beyond their ordinary happy state, that is something that we’ve actually never experienced. Or we have experience in this way—we haven’t experienced the nirvana of a buddha—but we’ve all had times when the anger went away, or the attachment calmed down, and that feeling of peace that comes then. Or we’ve had the times when we look at something and it’s ordinarily something we would get angry about or attached about, and then we go, “Oh, that’s ok. ” Just that feeling of peace in the mind, we’ve all had that happen.

Based on those experiences that we have had, then we can think, “Ok, it must be something even beyond that.” Where you’re never even worried about craving, and attachment, and clinging, and ange,r and resentment, and jealousy even arising because your mind doesn’t even go anywhere near those things. It’s in this completely peaceful state that comes from having removed these afflictions. Just thinking like that gives us some idea of what we’re aiming for when we say, “May I become a buddha for the benefit of all.” And when we’re saying, “May I lead all sentient beings to buddhahood.” This is the kind of thing that we want to go to and where we want to take others.

Also realize that buddhahood isn’t just that, it’s also much more. It’s the supreme wisdom as well. And it’s the skillful means to able to benefit others. Just this will give us some idea. I really recommend, in your meditation, just imagining this for a while, because we hear it—because I’m always saying this—we hear it, “Oh yeah,” but do we actually sit and actually do that in our meditation? Especially when you do the self-generation or when you imagine, “If Chenrezig had this problem, how would Chenrezig deal with it?” Really putting yourself in that mental state and getting some idea. 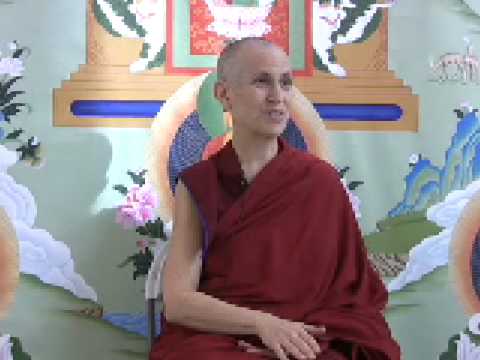 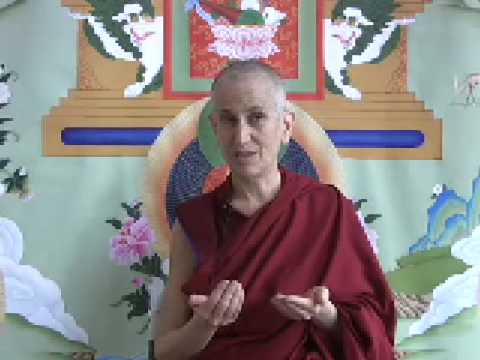