In thinking about it this morning I thought, actually I can talk about this one for probably a year or two, because you can put the whole path to enlightenment under there. I know I have to restrain myself a little bit, but yesterday we talked about cyclic existence and its causes being ignorance and the afflictions and then the karma that produces rebirth and so the antidote to that is the three higher trainings. Higher training in ethical conduct, in concentration and in wisdom.

With the higher training in ethical conduct, then we take precepts and we keep our precepts purely and this sets the foundation, the basis for the higher training in concentration which is developing samadhi and serenity or shi-ne [Tibetan], calm-abiding, samatha, so that the mind can stay focus on the object of meditation without getting distracted. So you need ethical conduct as a prerequisite to do that , because if you don’t keep ethical conduct, your mind is all over the place and fill with afflictions, then you can’t concentrate when you meditate, so its very important to have that ethical conduct. And then on that basis to develop concentration, and then on the basis of concentration to develop the wisdom realising emptiness.

Then on the basis of that developing concentration that involve subduing the gross mental afflictions. They are gross but they are a little bit more subtle than the really gross ones that make us act unethically. Whereas sila just makes them subside just for a short period of time so we’re not doing the negative action that they would motivate, with samadhi they’re able to be suppressed for a longer period of time, whenever you’re in that single-pointed concentration those afflictions are not manifest. But here too the subduing of the afflictions is only temporary because they haven’t been eradicated from the root, because when you come out of your samadhi then the afflictions can arise again.

That’s why we need the higher training in wisdom, because it’s with that wisdom, combined with the concentration, you have to combine the two so that the wisdom becomes very strong and you can really not only see emptiness directly but keep your mind abiding in that realisation for a long time and in order to gradually cleanse the mind from the afflictions. That higher training in wisdom is the one that really cuts the afflictions from the roots so that they can no longer appear. But you can’t go straight to the wisdom, you have to cultivate the concentration first, otherwise how can you generate wisdom if your mind’s all over the place. Even if you get a little understanding, you can’t keep your mind on it.

To have the wisdom you need the samadhi, the concentration and to develop that, you need the sila, the ethical conduct, that frees the mind from the very gross disturbances because we see when we act unethically, our mind is not at peace, is it? The mind that prompted those actions are restless and then of course we feel guilty and regretful afterwards, the mind is not peaceful. So these three go very much in tandem together.

Those three are how we free ourselves from cyclic existence and the path we’re going to teach others to free themselves, but here in this verse it’s saying, “May all beings escape from the prison of cyclic existence.”, and so for that we need the bodhicitta. If we want others to make this prayer, we need to teach them the bodhicitta also, and so that will be tomorrow.

Sex and our culture 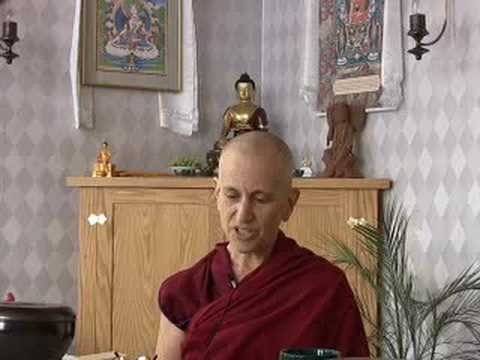