“May all beings be without faults.”
This is the prayer of the bodhisattva when seeing an empty container.

When we talk about faults, I don’t think it means faults like we usually think of faults like, “Gee, they spilled something and they didn’t pick it up,” or, “they criticize me, how dare they.” It’s not talking about those kind of things but about the mental defilements, the afflictions, the taints.

What’s very interesting in all these different lists, which are used in different situations, is there are some that come up very, very often, like in almost every list of the major ones. Guess what they are? Ignorance, anger, and attachment. You find some version of them, in one way or another, in almost every list. What’s interesting about attachment is that sometimes, depending on the list and circumstances, the variety of attachment that is being discussed is attachment for sense pleasure. In other words, we beings in the desire realm are so glued to the five senses, so craving for this kind of pleasure from external objects. Then in other situations attachment is described as attachment for existence. Here what it means is attachment for existence in samsara, which includes wanting to be reborn in the desire realm. It also includes wanting to be born in either the form realm or the formless realm, those higher levels where people get born there by virtue of their meditative realizations—not wisdom realizations but levels of samadhi. You get born there but those beings still have the attachment for existence in samsara because they seek rebirth in either the form realm or the formless realm.

Sometimes attachment is talked about in a very raw way about sense pleasure, then sometimes about just the mind that wants to keep getting born in samsara. That mind doesn’t say, “Oh, samsara stinks, I want to keep getting reborn there.” It’s a mind that says, “Oh, these meditative states are so nice. Sense pleasure, that really stinks. It looks good but when you really look at it, it doesn’t come through. But pure samadhi, mmmm.” Very easy to get attached to that. There’s still some clinging to the “I” at that point, when the mind hasn’t seen through the falsity of the appearance of there being a real substantial truly existent person and instead the mind’s still buying into that. It’s not yet ready to really give up being an existent entity with a real “I.” We still want to differentiate ourselves from everything else and make sure that somehow we’re unique and special. There’s this clinging to the “I”, to the “self”. That’s the chief thing that differentiates us from everything else isn’t it? “ME!” And it’s based on “me” that then you get the whole all the other things. That’s what’s interesting about seeing attachment in these different lists, spoken about it in different situations—what we’re attached to—and then finding that in our own mind. So very interesting, always more layers to peel off.

We even like the identity of being a Dharma practitioner, don’t we? “I’m a Dharma practitioner. I want to be reborn as a disciple of His Holiness. I want to be reborn in the pure land with Amitabha. I’m tired of the desire realm, that stinks. I don’t want the form and formless realms because that’s still attached to existence, but I WANT TO BE REBORN IN AMITABHA’S PURE LAND!” So there are all these different layers of clinging. All these different layers. So we just start peeling them off, slowly, slowly reducing them, learning to see through them. And learning to overcome the incredible attachment to being a person, being a separate entity.

They say that when you realize emptiness sometimes there’s this incredible fear that comes up, because all of a sudden everything you’ve based your whole identity and your whole life on, you see is not existent. And there’s this fear, “Wait a minute, I want to exist. What are you saying I don’t exist.” That’s why we need a lot of merit, so that when that kind of perception of emptiness comes we don’t react by drawing back in fear, but can say, “Oh, thank goodness I don’t exist as I thought I did.” Of course, it’s a relative self, but, “Thank goodness there’s no truly existent one.” Instead of “AAAHHHH, where’s my truly existent self, I want it back, it’s the basis of everything.” So we keep working at it. 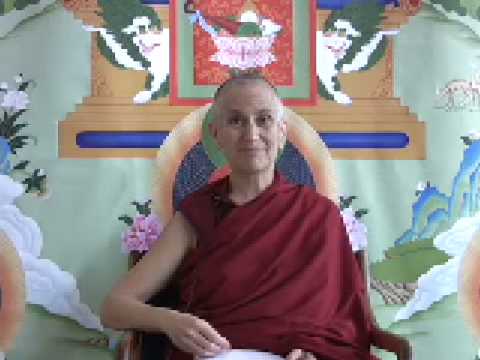 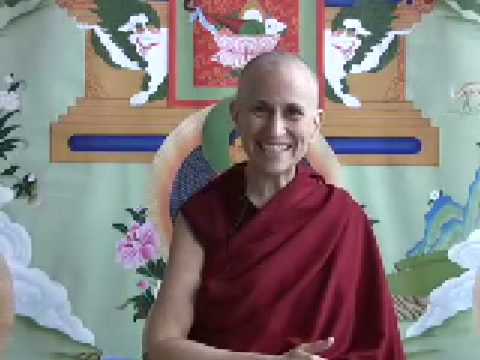 Verse 28: Joy in the teachings