So that’s kind of useless staying in that state of self-doubt and fear about our own capabilities. And the best way to remedy that is, if there’s something that we don’t know that we need to know, then find out what we need to do in order to learn it. And then go about doing that. And to give ourselves some slack in this process and not have this expectation that, “I’ve got to be this fantastic meditator and grand Dharma practitioner, and I’m afraid of not meeting my own expectation”, but to recognize that we’re all kind of baby beginners and, you know, and then we do what we can. So I think one of the antidotes to this kind of fear is just self-acceptance and putting reasonable amount of energy into learning what we need to learn, practicing what we need to practice and so on. Because if we do that, then we’ll actually gain the abilities that we’re so afraid of not having, okay? Whereas if we just kind of stay stuck in the fear and the anxiety, then nothing changes, does it?

Okay so, I think part of this comes because of a few things. One is we might be doing a new kind of practice; you know, a one-month retreat, a three-month retreat. So you haven’t done it before, so there’s some fear and nervousness that comes because it’s a new experience. But also you’re excited and you’re looking forward to it, and you have some good energy that you’re taking into it. And so that good energy will lead you to, you know, learn what you need to learn, practice what you need to practice, and then slowly you’ll improve. Okay?

The other kind of fear happens when we build up this great image of, you know, “I’m going to be Buddha by next Tuesday or at least by the end of the retreat.” You know? “And if I’m not Buddha, at least I’ll have realized emptiness then or at least I’ll have single-pointed concentration or bodhichitta or at least I’ll have full renunciation. Well maybe I’ll at least have recognized precious human life.” You know? But we have some kind of expectation, and then we’re afraid of not meeting it. And so, I think setting these kinds of rigid expectations is not so helpful. I think it’s better when we have expectations or goals for a retreat to say, “I hope to be kinder than I was when I started the retreat.” You know. Or, “I hope to be more advanced in the practice of cultivating bodhichitta at the end of the retreat than I was at the beginning.” Not to not “I hope I’ll have realized bodhichitta by the end.” Okay? You get the difference, what I’m saying?

So in other words to have these things about, you know, “I’m aspiring to make some progress in that direction.” Yes. But we can’t say that, you know, definitely we’re going to hit a certain mark, because gaining these different realizations comes due to many causes and conditions, and we don’t know how many of them we’ve created and how many we haven’t. I mean sometimes we have, we can look at… Because the scriptures tell us what the causes and conditions are, and we may not know how much merit we’ve created and how much purification we’ve done, but we do know if we’ve studied certain things or have a strong feeling for certain topics and stuff like that. And so that gives us, again, an idea of what to cultivate. And so to really think, you know, “I aspire to do this.” And then you’re not afraid of not meeting an unrealistic expectation. Okay? So, “I aspire to be better in XYZ than I was going into it.” That’s reasonable, isn’t it? Okay. And that’s also attainable. And then if you attain what you set out to do, then you feel encouraged. Yes. Whereas if it’s, you know, develop renunciation by the end of the retreat, and then at the end of the retreat you’re still, you know, dreaming about lunch, then you think, “Oh, the whole thing’s a failure.” Well, no, it wasn’t a failure, because you’re probably further along then you were at the beginning, but it’s because you had some unrealistic expectation. Okay? 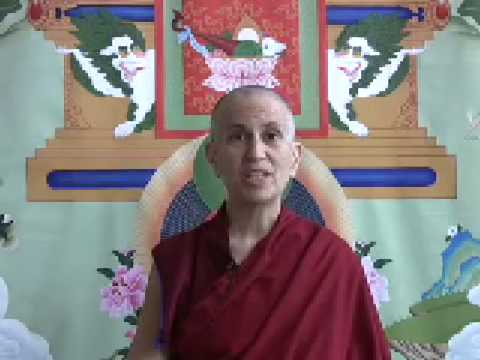 Fear of being disliked