Fear regarding the economy

Fear regarding the economy

Yesterday we talked a little bit about working with fear in health situations and I thought it might be good to touch on what do we fear in economic situations, because people seem to be getting quite tight about the state of the economy. And first of all, just one comment is, I think the more we get tight and afraid, the more it becomes a self-fulfilling prophecy. So the more, as a country, everybody goes “Aaah, the economy!” then the more they act in ways that actually make the economy worse. So I think that’s one thing to be aware of. And then a second thing is, to really ask ourselves, because we tend to get frightened: “Oh, I’m not going to be happy because this and this and this and this, because the economy is not so good.” First of all to ask ourselves: is it really the case that those things are going to happen? Second to ask ourselves: what resources do I have, internal and external, to deal with things that could happen? Because usually they aren’t as bad as we think they are going to be. And even if things should be tight, then there are always options and ways to deal with it.

The source of our happiness

Okay but, most of all, the question really is to ask ourselves: does my happiness depend on the state of the economy? Yes? That’s really the question to ask ourselves. And if we say yes, then we need to ask ourselves: what’s the meaning and purpose of my life? Because if we are linking our feeling of happiness to the state of the economy, we are putting ourselves in a situation where we have no power over our own happiness; because we’re saying it all depends on something external. Personally speaking, I think that internal happiness shouldn’t and doesn’t depend on the state of the economy. We can actually be happier with less and we have fewer problems if there’s less. And there’s also going to be more equitable economic distribution across the planet if, as a country, we have a little bit less and save some things and don’t overconsume and so on. And I actually think it’s a very good training to work with the mind that unfortunately has gotten habituated with “I want it, okay let’s just go get it.” Because that mind is just feeding so many unrealistic expectations, so much attachment, and the fact that as a country we’ve gotten into that habit of “I want it, well let’s just go to the store and get it,” because credit is so easy. That mental state of greediness, because it’s not just the greediness of the CEO’s, it’s the greediness of the consumers who are saying “I want it, let’s go get it and I want it now even though I don’t have the money.” It’s that kind of greed in our mind that has caused the situation. And to realize that we can actually be happier with much less. Because if all those things that we got in the past were actually the cause of happiness, then once we got one thing we liked we wouldn’t have had to get a second thing, because we would’ve been perfectly happy and content and satisfied with the first one, if it were actually indeed the cause of lasting happiness. But our whole experience shows us that those things aren’t; that’s why we have to go get the next one and the next one and the next one. So we become a country of consumer addicts. And it doesn’t bring happiness inside and isn’t good for the society as a whole.

Being happy with less

So, I think it’s very good just to look at our lives and then see how often we can be much happier with less and especially if everybody has less. You know, because they’ve done psychological studies and we judge our happiness in comparison to everybody else’s. Or we judge things, you know, how much we have, is it enough, in comparison to everybody else. So if everybody else has a little bit less, then everybody still feels like they have enough because we evaluate it in comparison to other people. Because we don’t get jealous and envious unless somebody has more than we do, so if we all kind of go down a notch together, nobody gets jealous or envious. And they’ve done so many studies that shows this is in fact the case. And so, I think we get this through our, sometimes very thick, skulls, that we actually can be happier with less, we have fewer problems and sometimes much more contentment. And I think also by not consuming so much, we become more creative, and we do more things with our family, and we do more things with our friends, we help each other much more. And so this creativity and this thing of working together, doing things together actually builds stronger relationships. And I think those stronger relationships amongst sentient beings bring much more happiness than filling our living spaces with a lot of stuff we don’t need and then getting fearful because we can’t get the next new thing that we don’t need. Okay? Getting what I’m talking about? Yes? So, instead of getting afraid about the economy then just be satisfied with what we have, because anyway we have so much more than most people on this planet do. And working on cultivating that internal feeling of happiness, and so sharing things and giving things away and building relationships, and being creative in how we find entertainment.

And so I’ve noticed that many of the people in the Abbey have been sharing their things some more since the talk I gave about freeing ourselves from possessions and how they create our identity. So people have been giving things away, and sharing things more and divesting themselves of things. And that brings a lot of happiness doesn’t it? When you can give something to somebody else and share things and then not be so encumbered by having so much, okay? So it’s a very good antidote to the mind that just gets fearful and frightened about the economy, because our happiness really doesn’t depend on all of that. 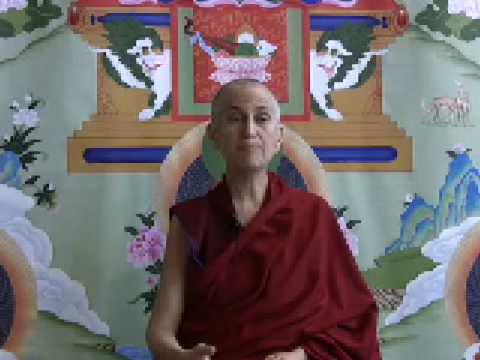