The emptiness of giving

The emptiness of giving

Somehow I didn’t manage to finish verses yesterday, I stopped in the middle.

By the merit of offering drink, may their afflictions, hunger, and thirst be pacified.

I explained that already.

May they possess good qualities such as generosity and take a rebirth without any sickness or thirst.

Dedicating for the people who offer our food and offer our requisites, that they may have good qualities such as generosity. Generosity is one example. Ethical conduct, fortitude, the other paramitas are also good qualities. Love, compassion, tolerance, forgiveness, all these kinds of things. So dedicating for these people who, by virtue of their offering to us, may they have all these kinds of good qualities in this life and of course in future lives. And may they take a rebirth without any sickness or thirst.

Sickness could mean physical sickness, thirst can mean not having enough to drink. But sickness could also mean mental illness. It can mean being overwhelmed by afflictions. You know, when you’re sick with anger, sick with greed, so many afflictions that your mind is tormented, basically. And thirst, again, meaning craving, wanting, clinging, needing, constantly dissatisfied. So, by virtue of their generosity in fulfilling our physical needs this life may they have in their future lives physical, mental, and so on, satisfaction and fulfillment.

The one who gives, the one who receives, and the generous action are not to be observed as truly existent. By giving with impartiality, may the benefactors attain perfection.

This is what we were talking about last night in the teachings. When we dedicate (and this whole series of verses are dedication verses here that we do after eating) it’s said that you seal it with emptiness. “Sealing it” in the sense that you see the whole thing as empty of inherent existence. How it it empty? Because the whole process is dependent arising. What does it depend on? There’s the agent (the one who gives), there’s the object (the one who receives…. Or you could also say the food or requisites that are given.) And the generous action (the action of giving). That all of these are dependent on each other.

This is quite a meditation because when we look at a situation of generosity we usually feel like, okay, there’s the giver out there kind of doing their own thing. And there’s the recipient also independent over here. And the act of giving is some kind of nicely defined thing. And you just glue the three together like you’re taking three post-its and putting them together.

In actual fact, the giver doesn’t become the giver without the recipient and the action of giving and the gift. The recipient doesn’t become a recipient without a giver and the action and the gift. And the action doesn’t become an action (giving something) without a recipient and a gift and a giver. All these things don’t attain even their conventional existence of being what they are… Put it this way. They attain their conventional existence of being those things in mutual dependence on each other. They don’t exist as independent things that happen to collide in space. So it’s a very nice way to seal the generosity no matter what side you’re on, whether you’re the giving or receiving side. We don’t observe these things as truly existent because they depend on each other.

“By giving with impartiality, may the benefactors attain perfection.” Here “impartiality” could also be translated as “equanimity,” meaning that everything is equal in terms of being empty of inherent existence. By giving with impartiality, recognizing that the giver, the gift, the action, the recipient, that all things are equal in being empty. That’s what the “impartiality” means. “May the benefactors attain perfection.” The perfection of full awakening comes about through that realization of emptiness. We develop that realization of emptiness by applying it to everything that we do in our lives, because all the things that we do there’s always an agent, and object, and an action.

Another meaning of “impartiality,” a side meaning here, is that at the time of the Buddha when people would invite the monastics to come to their home and offer sangha-dana, offer a meal when they came. Sometimes of course they couldn’t feed the whole sangha so they would invite two, or three, or five, or ten sangha members to come. When they did that they couldn’t choose who they wanted to come. They would extend an invitation to the sangha and then according to ordination order however many people they requested would go for this invitation. If another invitation came in then the next group of people in ordination order would go. It was a practice of seeing all the monastics impartially instead of playing favorites. And seeing that they’re all equal in trying to keep their precepts and trying to practice, so not saying, “Oh, well I want the really funny monastic to come because he’s really a gas to be with and gives a great Dharma talk.” Or whatever. No, but you have a feeling of equality towards the monastics.

Here in particular it’s talking about the equality of everything in emptiness. But that’s a kind of a side meaning.

By the power of being generous, may they become Buddhas for the benefit of sentient beings, and through generosity, may all the beings who have not been liberated by previous conquerors be liberated.

By the power of the generosity of all the people who have made offerings to us may they become buddhas for the benefit of sentient beings. We’re coming back to our bodhicitta motivation, and may that be fulfilled, not only by us becoming buddhas for the benefit of sentient beings, but also by the benefactors and the donors becoming buddhas, through the power of their generosity, because they create such great merit that has been sealed by an understanding of emptiness. So may all of that merit be dedicated for full awakening of ourselves and others.

Then, “May all the beings who have not been liberated by previous conquerors be liberated.” There have been countless beings who have attained liberation and full awakening before us, and we’re still here, because we like going to the beach and we like going mountain climbing and we were work-a-holics, and we were drinking and drugging and, you know, exalting in all of our distractions since beginningless time. So all of the beings like us, and those who are more unfortunate than us because they don’t even have a precious human life, may all these beings who have not been liberated by previous conquerors, may they attain liberation and full awakening.

You’re taking one simple action here of giving food, which is a very human action, isn’t it? If you’re religious or not religious, everybody shares food. More or less. Sometimes religious people don’t share food with people from other religions. It’s really kind of weird because religions should really unite people instead of separating them. But generally, among most human beings we share food because it’s something that we all need. So here’s a very simple action that’s done and a very simple thing that we do how many times a day do we eat, and we’re using it to create incredible merit, to generate an understanding of dependent arising and emptiness, to cultivate an awareness of the kindness of other living beings, and to make prayers and aspirations for their wellbeing, not just for this life. Because this life comes and goes very quickly. But prayers and aspirations so that they can have good rebirths where they can practice and attain the realizations and become fully awakened.

This kind of thing is a very good example of you take one small action that’s very common and it can be used as the basis for collecting merit and wisdom that’s really enormous. 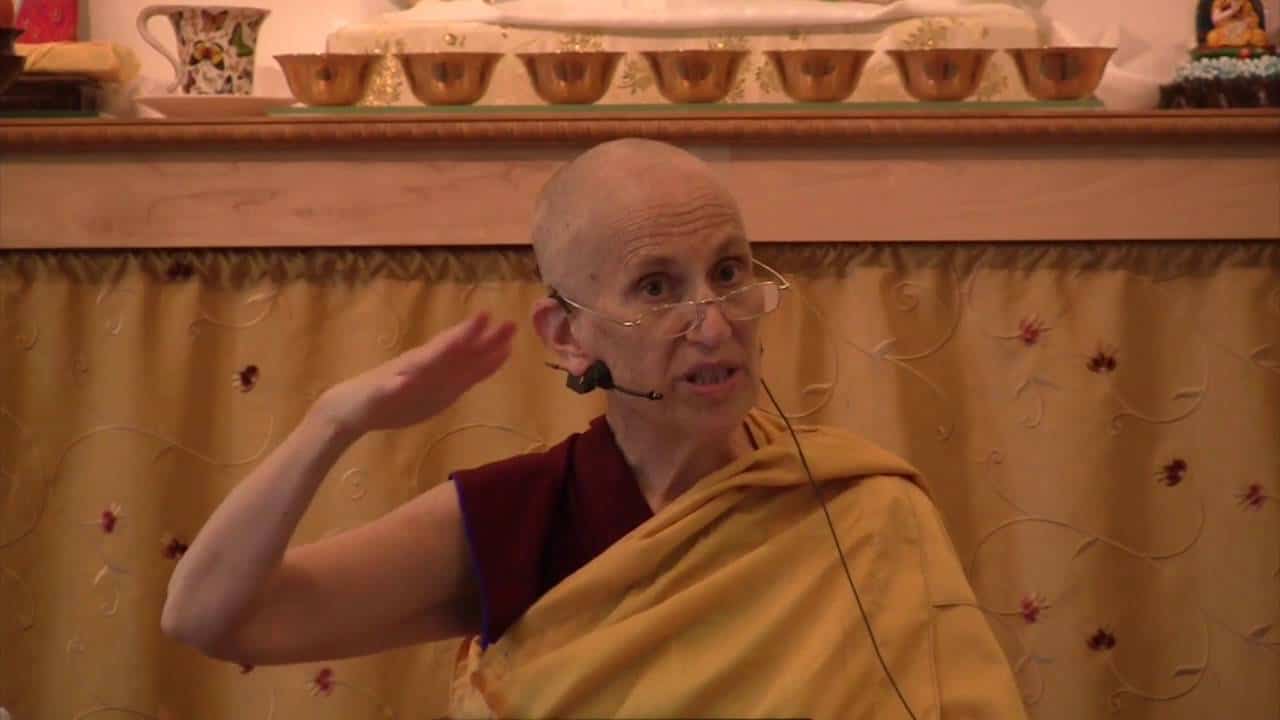 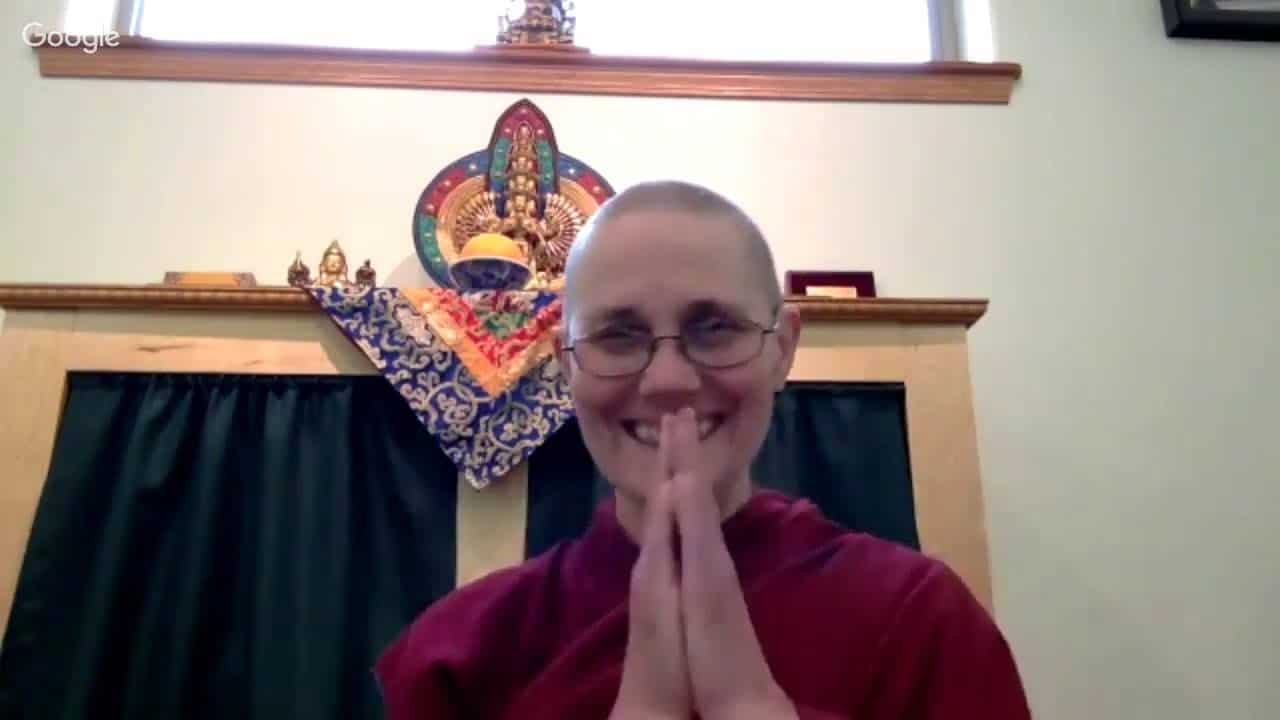 Mind is the source