We’ll continue with the dedication verses that we say after lunch. The next one is:

By the merit of offering food, may they have a good complexion, magnificence, and strength. May they find foods having hundreds of tastes and live with the food of samadhi.

“They” meaning the benefactors of the food, the people who made offerings to us. And like I explained yesterday, not only of the food but of everything else that we have and use here.

“May they have a good complexion” means may they be attractive physically. Actually they usually say that the cause of having a good complexion or being physically attractive is practicing fortitude in this life. In other words being able to restrain ourselves from getting angry. Because when we’re angry we’re pretty ugly now, and it creates the cause for future ugliness. Practicing fortitude is a remedy for that.

“Magnificence.” May they have magnificent qualities, may they be successful in all of their virtuous projects, may they be able to benefit others.

“Strength.” Strength doesn’t mean just physical strength, although that’s certainly helpful. Physical strength, healthy body and everything. But also to have a strong mind. A strong mind is one that doesn’t crumble when there’s adversity, when there’s criticism, when we’re stressed because there’s a lot to do. It’s a mind that just can remain firm and strong and just do what has to be done without freaking out about it. Which is a lot better than how we often deal with stress, isn’t it? We often deal with stress, “Ahh, I can’t handle it, this is too much.” Then, I get into this: “I have so many things to do!” And then I spend all my time saying, “I have so many things to do!” that I don’t do anything. Whereas if I just say, “You know, the world is really not going to fall apart if these things get done in the order they need to be done in. I set the priorities. Really, Chodron, the world is not going to end if you don’t finish your list today. Or even tomorrow. The world’s still going to be here.” Remarkable, isn’t it? So I don’t need to get so stressed, I can just do what I need to do, one thing at a time, and then eventually it all happens.

It sounds so easy, why can’t we do this? Why do we go into this (panic)? Habit? But what’s behind that? What do we think we get out of it? Yes, there’s a big sense of self. “I have more to do than the rest of the planet!” When I think of what, like, the President has to do…. Then I would get stressed. Making the kind of decisions, with the karmic weight that a President makes…. No thank you. Anyway, so my piddly-dunk stuff is really rather manageable. I don’t have to worry about are we declaring war, and are millions of people going to be killed, and this kind of stuff.

“May they have a good complexion, magnificence, and strength. May they find foods having hundreds of tastes.” In the classical Indian texts apparently this was the optimum of what you could have was food with a hundred tastes. I assume that means a hundred good tastes. I don’t know if there are a hundred good tastes. Or if you get to like 97 and then you have the other three that are bad tastes. I’m assuming it’s all good tastes. But it’s hard to imagine a hundred of them, isn’t it? Anyway, the idea is that they’ve offered us food, so may they have what they need, and may it taste good, and nourish their body, nourish their mind so that their virtuous aspirations can be successful, and so that they can have a happy life.

“And live with the food of samadhi.” When we offer food on the altar it symbolizes the realization of samadhi, of deep concentration, the idea being that when you have deep concentration your mind is so focused that your body needs very little food. You are nourished, physically and mentally, by the power of the concentration. The Tibetans also have this practice called “chulen” which means “taking the essence,” in which they make pills out of different flower substances and herbal things. They recommend this only for people with very deep samadhi, not just kind of average Joe Blow. But when the real strong meditators go up and they want to be alone, so they don’t have to be disturbed by going shopping for food or disturbed by lots of people bringing them food, they can survive on these pills and water. Quite remarkable.

Samadhi apparently has this ability to nourish not only the mind but also the body. And I’ve read accounts, too, in Thailand of people, when there’s danger… When Thailand had forests in the past, now their forests are really decimated. But they used to have meditators in their big forests and some of them, when there were tigers and other wild creatures around they would use the fear they felt to motivate them to have very strong concentration, and they would go into samadhi, and somehow the wild animals would leave them alone if they were in their samadhi. Somehow the animals sensed what was going on and didn’t disturb them at all. Kind of remarkable.

By the merit of offering drink, may their afflictions, hunger, and thirst be pacified. May they possess good qualities such as generosity and take a rebirth without any sickness or thirst.

Here we’re offering drink. I think the next verse food, right? Here, by the people who offered us beverages and and any kind of liquid, broths, even water and who knows what. “May their afflictions be pacified.” Their ignorance, anger, attachment, conceit, jealousy, these kinds of things, laziness, may all these be pacified.

“May their hunger and thirst be pacified.” Hunger and thirst could be physical, so by offering drink then it makes sense that their physical thirst would be pacified. But often in the scriptures “hunger” and “thirst” stand for “craving,” the mind that is thirsty, that is hungry, that is craving for sense objects, for sense stimulation, to see beautiful things, to hear beautiful things, taste good foods, smell good scents, have nice kinds of tactile sensations, good reputation from hearing nice, ego-pleasing words. We’re very thirsty for external things, aren’t we? That kind of thirst drives a lot of our choices, a lot of our decisions, and most of our actions during the day. So when we’re saying “may their hunger and thirst be pacified” it doesn’t just mean may they have enough to eat and drink, but may the force of their craving be pacified and subdued.

When we’re under the influence of strong craving we have very little freedom. We may think we have a lot of freedom, because in this country if you crave things you can jump in your car and go get them right away. You can go online and order them in five seconds. We think that’s freedom. Actually, it’s not, we’re totally controlled by the power of our craving. Imagine what your life would be like if you didn’t crave different things. If whatever you had was good enough. Lama Yeshe used to always say that to us, “Good enough, dear.” If who you are is good enough you don’t need to be somebody else you aren’t. If what you have is good enough. If what you do is good enough. Then there’s real contentment, there’s not this hunger and thirst of, “I need something from outside to validate my existence, to prove that I’m a worthwhile person.

We have a lot of that, don’t we? And if we can’t do something, then we’re afraid we aren’t appreciated, we aren’t valued, people are going to throw us away, something like that, instead of having confidence that we’re a valuable person simply because we have the buddha potential and our life is meaningful no matter what the state of our body. So subduing that kind of hunger and thirst, wouldn’t that be nice?

I think people also enjoy knowing that we pray for them. So all the people who make offerings to the Abbey, when we do tsog every two weeks, we read out the list of all of their names. Once a year we do a special puja for our benefactors, we read out their names. And then here for all the people who offer food and immediate things that we’re using. 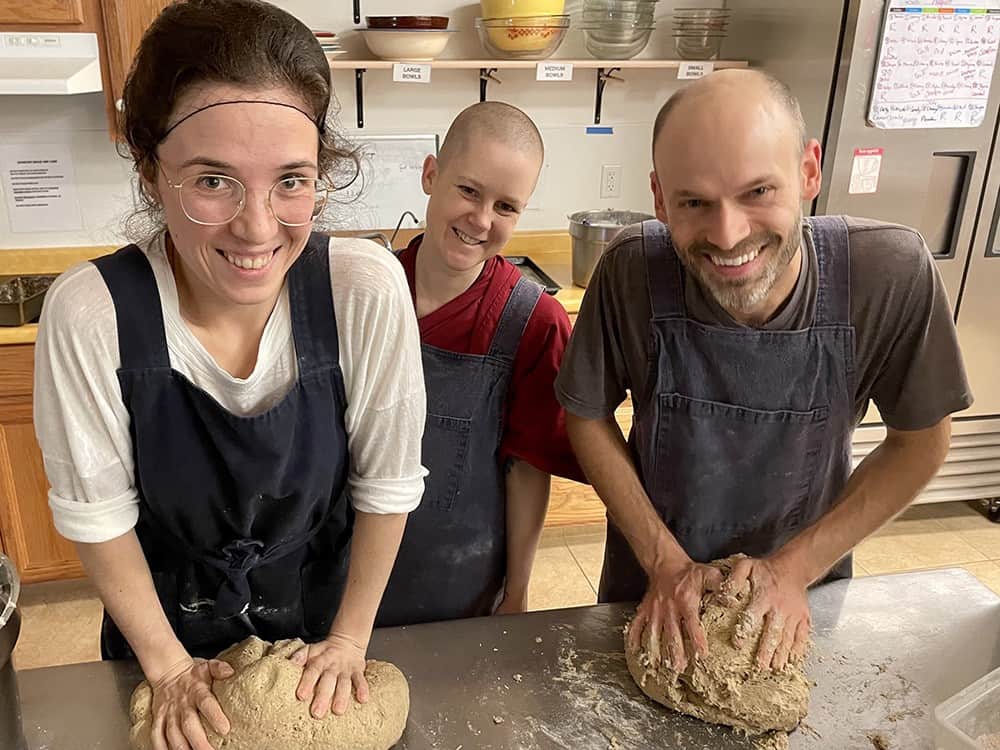 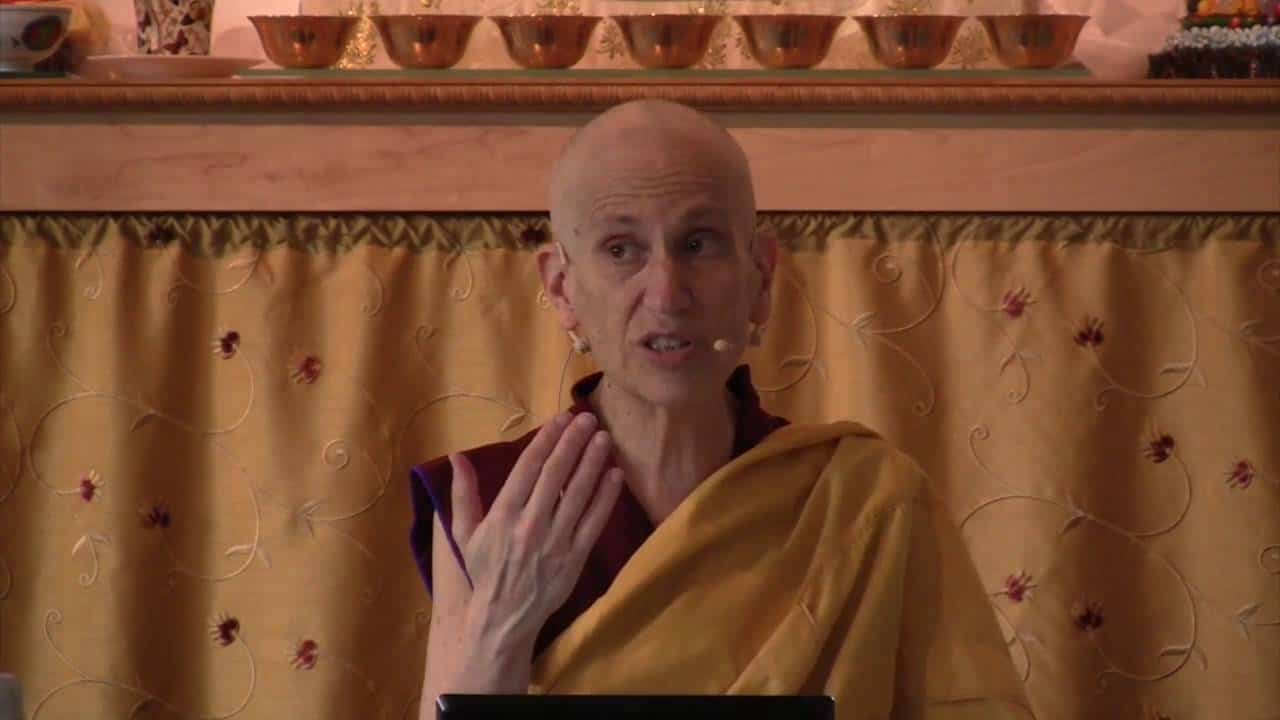