After we do the five contemplations and prepare our mind with the right attitude for eating and generate the right motivation, then we pay homage to the Buddha, Dharma, and Sangha with the first three verses that we chant. Then the fourth verse is the actual offering verse. It says,

Before we started the chanting part where we do the three homages to the Buddha, we did the actual consecration of the food. After the five contemplations, before we chant (the homage verses), we visualize the food dissolving into emptiness, appearing as blissful wisdom nectar. If you have highest class tantra initiation then you do the visualization of the inner offering. And if you can chant really fast you can chant the inner offering. Anyway, it concludes with “om ah hung, om ah hung, om ah hung.” We imagine the syllables OM (crown), AH (throat), HUNG (heart) for the Buddha’s body, speech, and mind dissolving into the bowl and transforming all of the food into the blissful wisdom nectar. So by the time we get to this verse, verse four of the chanting, now we’re going to offer that bowl of blissful wisdom nectar.

We offer it to the supreme teacher, the precious Buddha. The Buddha is often called the teacher. I like that. He’s the teacher. His Holiness often says—(because) sometimes people are confused about who their teacher is because they’re just beginning and going around—and he says the Buddha’s our teacher. We always come back to the Buddha is our teacher. That’s why on our altars the Buddha is front and center. Even like in the Kwan Yin room where we have a large Kwan Yin statue, above Kwan Yin we have the Buddha. Remember, everything, the whole lineage, comes from the Buddha.

He’s the Supreme Teacher. When you think about all the teachers you’ve had in your life, starting from your parents who teach you how to tie your shoes and potty train you, and how to walk and talk, and so on. Those teachers have all been very kind to us and contributed to our well being immensely. But none of them have the ability to lead us to full awakening, to lead us out of the unsatisfactory state of samsara.

The Buddha is our teacher, and the kindest teacher that we have because it’s the Buddha who will teach us the way to do that. Nobody else really can. They may love us to bits. They may praise us from here to the heavens. But none of them can teach us how to end out samsara. In fact, many of them get us more involved in our samsara. So the Buddha really is the supreme teacher for us.

“To the supreme refuge the holy precious Dharma.” Like I was saying before the Dharma refuge is the real refuge, here referring to the last two of the four truths—true cessations and true paths. When we’ve actualized those then our mind has become the Dharma, then our mind is free. We become the refuge. Unlike other religions where your refuge objects are always outside and you can never become them, you can only approach them, in Buddhism we become the actual refuge objects, starting with actualizing the Dharma on the path of seeing, where we then have part of the Dharma refuge. Then we become part of the Sangha refuge. Then when the mind’s fully purified we become the Buddha refuge.

The last line in the offering verse is, “To the supreme guides the precious Sangha.” The Sangha helps to guide us, to set an example for us, to encourage us, to inspire us. The Arya Sangha may be beings that we meet that are highly revered in the Buddhist tradition. They may also be people that are highly realized that we have no idea are highly realized. Or they may just be the general sangha community who are holding precepts and doing their best. In any case, they act as what Lama would call “a good visualization” for us. In other words, they give us an idea of how to practice, how to handle situations.

Westerners tend to be a little bit gross in that way. We don’t tend to be refined and observe people’s behavior and learn from it. In Asia that’s one of your big ways of learning. Especially at the ordination ceremony. I didn’t have any translation, so I had to do what everybody else did, and out of the side of my eye watch what was going on and how people were behaving, and copy it. Ifound when I did it really helped my mind.

Of course, when you’re with your teachers you see how your teachers handle different situations, and there’s a lot to learn from that.

Observing the Sangha is a good way for us to learn. And of course the Sangha can actively teach us the teachings, too, and explain the texts, and so on, to us.

All the objects of refuge

“To all of the objects of refuge we make this offering.” At this point… I forgot to mention this yesterday. When we’re doing the homage to the Three Jewels it’s not just done to empty space, we imagine in the space before us the Buddha surrounded by all the buddhas and bodhisattvas, and on little tables the Dharma scriptures. When we’re making prostrations to the Buddha, Dharma, and Sangha, and chanting the homage, and visualizing all of our previous lives around us, and all sentient beings around us while we’re chanting the verses of bowing, then we have that whole scene going on. Now, with offering, we imagine offering goddesses coming. If you’re involved in tantric practice then you’re already visualizing yourself as the deity, from your heart you emit offering goddesses. They scoop up the blissful wisdom nectar and they take it to the whole merit field in the space in front of you. Then as they accept it they feel great bliss. It’s a very beautiful kind of…. It’s not just saying the words and understanding the meaning of the words, but you’re creating a whole scene around you and participating in that scene, and bringing in everybody else, too. It’s not just your own private lunch with the Three Jewels. You have all the sentient beings around you.

This is the actual offering verse. Normally when we’re doing the chanting we have our hands (palms together). That’s because we all server ourselves food in a line. If you’re sitting at a regular meal situation where the food’s in front of you, when you do the offering then you put your hands on the plate and imagine that you’re lifting it up, you’re offering it, this plate of blissful wisdom nectar to the Buddha. 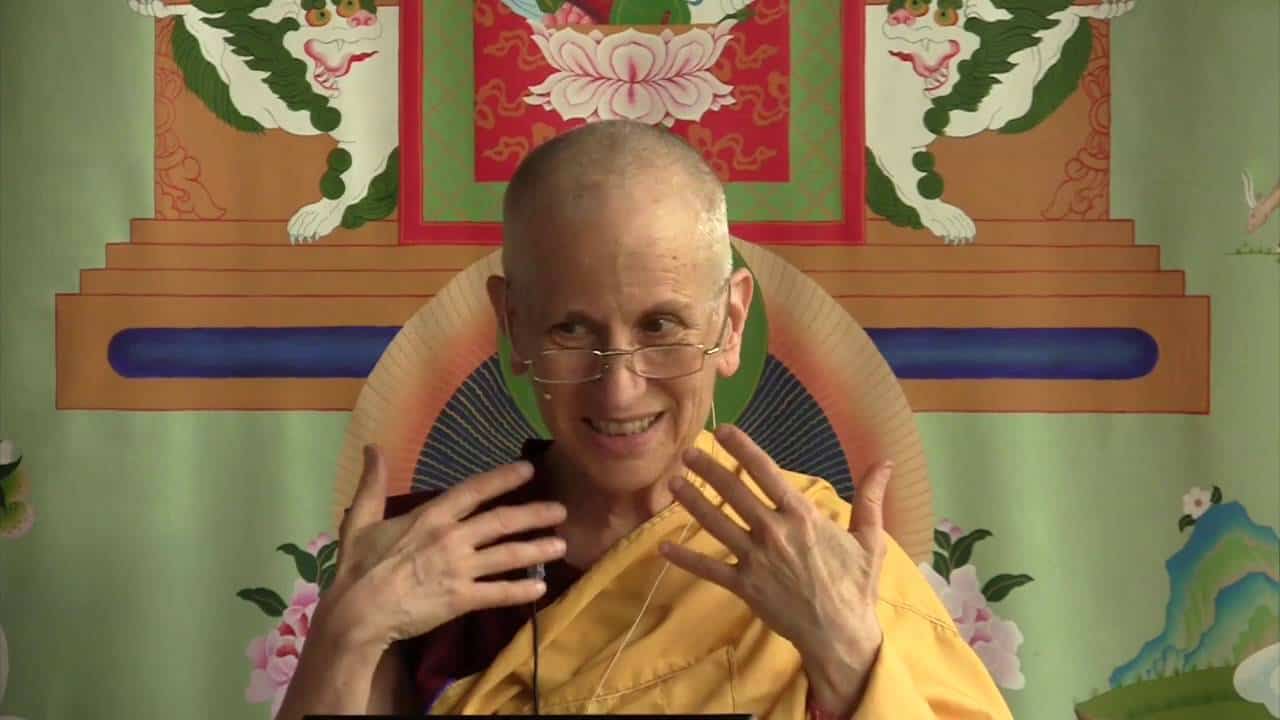 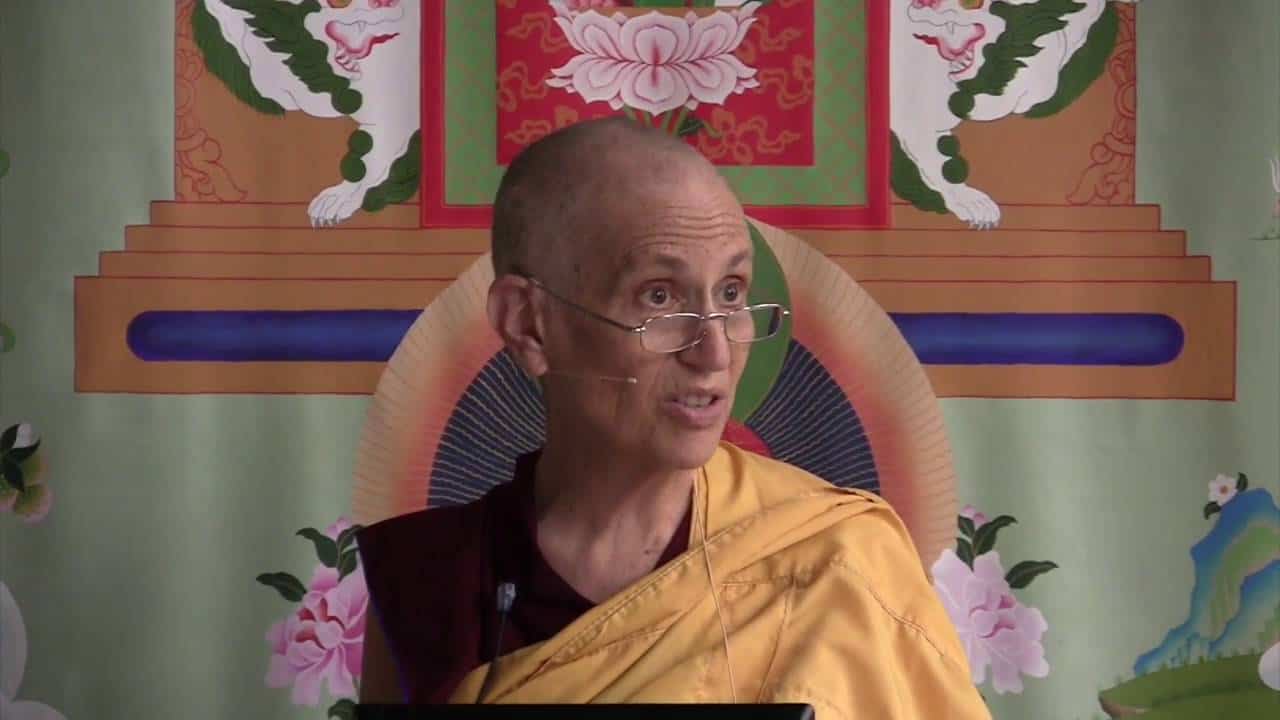 Points on karma and purification using the four forces