Dedicating for the benefit of all

Dedicating for the benefit of all

We’re still talking about the prayer dedicating the merit specifically for the people who offer the meal, and in general for all the sentient beings who have offered to us and help us stay alive. We’ve been going through the prayer, here’s the next installment of the verse. This verse says,

By the merit of this generosity, may the naga kings, gods having faith in the Dharma, leaders who support religious freedom, benefactors, and others living in the area live long, enjoy good health and prosperity, and attain lasting happiness.

“By the merit of this generosity,” this is referring to the generosity of the people who offered us food or whatever requisites. We’re dedicating, again, how their merit can ripen and how they can be benefited by all of this.

“May the naga kings….” (We’ll go through each one of these individually.) Nagas are a kind of sentient being. I think they’re in the animal realm. They’re very intelligent. They have a snake-like body. And they tend to live in water or near water or swamps or places like this. Not everybody can see them. They’re very tidy, very clean, and you want to have a good relationship with them. When we have Nagarjuna, he’s so called because he went to the land of the nagas to redeem the perfection of wisdom sutras, so the story goes. There may be nagas on the property or nearby.

I’m not somebody who always believes in these kinds of things, but, I remember one time I was doing a retreat at one retreat center and the bathroom was quite far away from where my cabin was. So I thought, “Oh, here’s a tree (it was the middle of the night) I’ll just pee there.” I peed there and the next day I had some swollen gland, something was really swollen. And this is what they say happens if you dirty a place where there are nagas and you displease the nagas. And I went, oh, hmm, interesting. Because there was no reason for me to get that. So I kind of mentally apologized to the naga, I did the mantra of the buddha who’s the king with power over the nagas and apologized to them, and the lump went away. Go figure. But it taught me a lesson not to just pee anywhere because it’s convenient because it may be someplace where the nagas are living.

“Gods having faith in the Dharma.” These are other living beings who live in the celestial realms. Particularly here, the desire realm gods. It can also include the form realm gods because they can hear the teachings of the Buddha. But the desire realm gods who often live around the property and so on, they like to often listen to the teachings of the Buddha. There’s one prayer that you do when you’re about to give teachings in which you invite all the gods to come and listen.

My Theravada friends say…. Because you notice sometimes when you take photographs, especially around here, you have these little white dots. They say that those are different gods who have come to the teachings or come to the area. Again, I’m not a big one on believing these kinds of things but if you’ve worked in our forest for any period of time, or walked through our forest, there’s some very special energy in our forest. It’s not just any forest. I think that’s because there are these gods–other living beings–who are sharing the space with us. When we moved here we told them what we were doing, asked them “please live peacefully.” Before we broke ground for this building (Chenrezig Hall) do you remember? We did offerings to some of the spirits who live on the place, to some of the different gods and different beings. They say that’s something good to do, rather than thinking we’re human beings we rule it all and everybody else just has to go along. You kind of take care of any other living beings, whether they’re animals or whether we can see them or not.

You’ve probably noticed when you watch our kitties, they see things that we don’t see. I’m quite curious about what they see sometimes. But all of a sudden they’ll go like this [look up quickly] as if tracking somebody who’s moving through space. Who knows?

“Benefactors.” That means all the people who help the Abbey with whatever. We have people who give to us monetarily, people who come and work at the Abbey. We really need the volunteers who come and work because as you see we have nearly 300 acres of land and a few buildings to take care of. And then even people who, they’ve never even visited the Abbey but they make prayers for us, they make donations, they really support what we’re doing and they’re happy in their hearts when they hear about what we’re doing. So we dedicate for all those people.

“Others living in the area.” For our neighbors. This one is very interesting because we live in a very conservative part of the country. We’re 45 minutes away from where that Aryan Nation used to be. And yet we participate in our community. We’re on the board of the Youth Emergency Services for Pend Oreille County. When they did a walk against child abuse we went in and we participated in the walk. We try and join in things where we can join in. And we’ve had a really wonderful relationship with people in our community even though we may have very different political ideas. But on a human level, when it comes to kindness and consideration and so on we’ve had a very good relationship with these people, and so I think it’s suitable, and proper, and respectful that we also dedicate for their welfare. Because again we share the area with them, it’s not like we can say “this is ours.” No. We share the town, we share the air, we share everything with them, and so to dedicate for their benefit.

I don’t have in my mind a specific border. “I’ll only dedicate for you up to here, but not past.” But you just think the broad area.

“Good health. Prosperity.” Especially material prosperity is important to people who we share the land with and share the country with. May they be materially prosperous. May they have mental satisfaction. Because nobody ever has as much material wealth as they would like. But may they have mental satisfaction, may they feel content with their lives and good about their lives.

And “may they attain lasting happiness.” That’s the happiness of full awakening. Implicit in this is may we benefit them, in return for their kindness, may we benefit them as much as we can in this life. And then in future lives, by the power of our practice that we’ve done in this life, which we’re able to do because of their kindness and their support, may we in future lives meet them and be able to also lead them on the path and teach them the Dharma. It’s creating a karmic link with these people, whether we’re bodhisattvas or not, to be able to create this link so that as we progress through the paths and stages we’re able to benefit more and more people, and we have this karmic connection with them and they’ll come. Because if we don’t dedicate for the benefit of people we may gain a lot of different realizations but nobody’s interested in hearing teachings from us, because we never, from our side, made a karmic connection with them. That’s why they say that even bodhisattvas, if you harm a bodhisattva they still dedicate for you and they dedicate to be able to teach you the Dharma and benefit you in future lives.

This is a verse from Nagarjuna’s Precious Garland, one of his dedication verses. It’s a very, very famous verse. You hear it a lot when we dedicate the merit. What it’s talking about is there are parallels between the basis, the path, and the result. There are parallels on the method aspect and parallels on the wisdom aspect. If you’re making a chart, and on the chart on the basis you have the two truths (conventional truth and ultimate truth). Then the path: under conventional truth you have the method aspect of the path (which is renunciation and bodhicitta), under the wisdom aspect you have the wisdom realizing emptiness. Those two practices create merit and create wisdom. Then the principal results (not the sole results but the principal results) of these: from practicing method (all the virtuous deeds based on renunciation and bodhicitta) then we attain the form body of the Buddha. That could be either the emanation body (which is the form the Buddha appears in to communicate with us very gross beings), or the enjoyment body (the form a buddha appears in in the pure lands for the high level bodhisattvas). Then from the ultimate truth, practicing to gain the wisdom realizing emptiness, collecting wisdom, then that leads to obtaining the truth body of a buddha. The truth bodies, again there are two. One is the wisdom truth body (which is the omniscient mind of the Buddha) and the other is the nature truth body (which is the emptiness and true cessations of a buddha’s mind).

He’s drawing all these parallels here. If you explain this verse in full you could include the whole path here. This is just a little synopsis.

“Due to this virtue,” from them making offerings, and whatever virtue we create by doing our practices that they support. “May all beings,” everybody completely. “Complete the collections of merit and wisdom” based on method and wisdom. And “May they attain the two buddha bodies” the form body and the truth body, that result from merit and wisdom respectively.

That completes the dedication verses that we do after lunch for the people. Next time we’ll continue on with another aspect about food and eating. 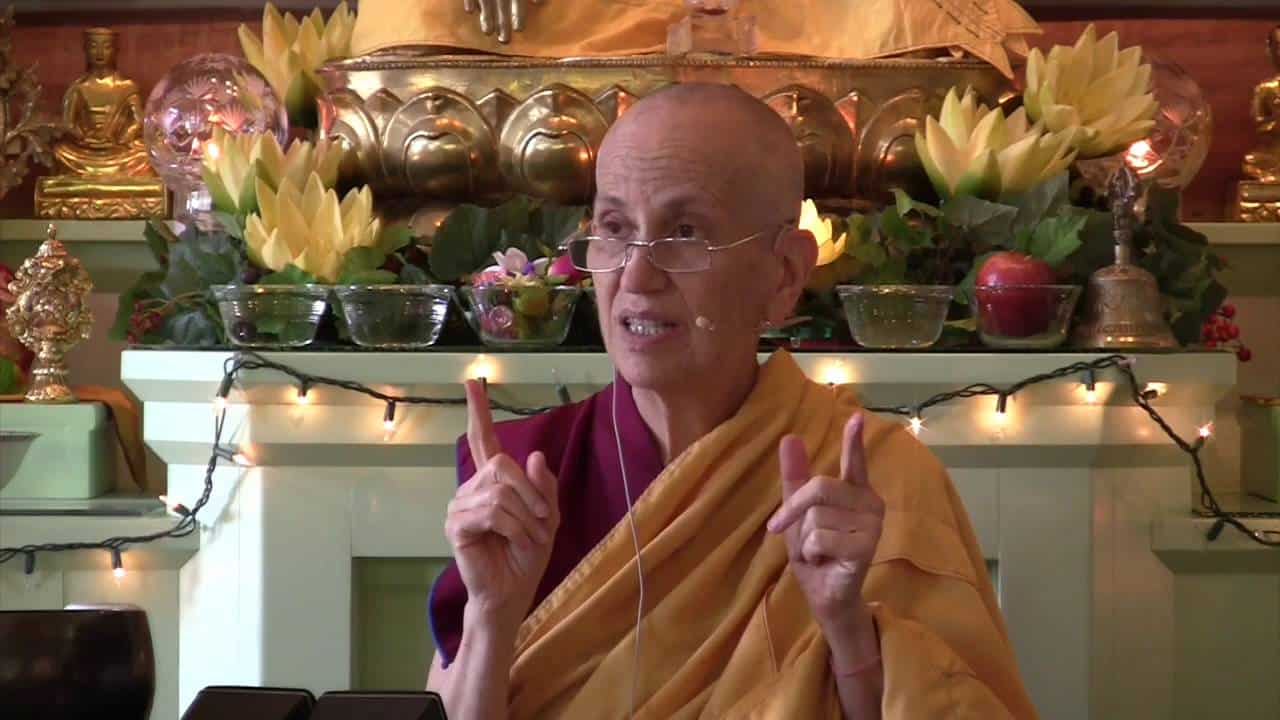 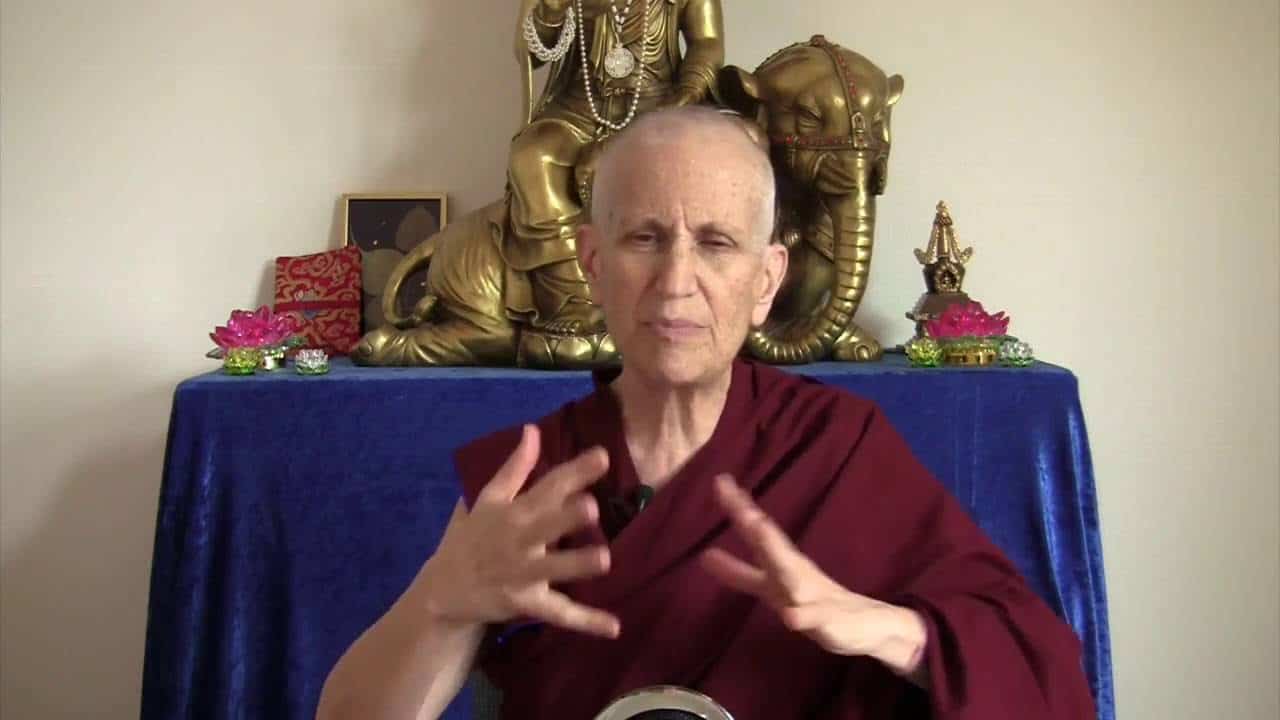