A response to a request for advice from Tan Nisabho, a young monastic who ordained in the Thai Forest Tradition after attending the Exploring Monastic Life program in 2012. Tan Nisabho visited Sravasti Abbey again for a few days in May 2015.

One thing that we had started on the other day was learning to think for yourself, which I think is quite important when you’re in the Dharma.

Learning from others, thinking for ourselves

You really learn from and listen to your teachers, but you think for yourself. Because, especially if it’s a Dharma point, you have to really think “is this true?” or “Is this not true?” Like in the teachings last night, if I’m talking about emptiness don’t just say “oh well, somebody said everything’s empty of inherent existence, so it must be,” but really think about that and understand it, and then in that way it becomes your own and you get it on a really deep internal level.

And then in terms also of other things that go on, not only specific Dharma points, learning from others but thinking for yourself. Also the way the community does things, or the way social issues are regarded, things like that. Then learn and listen from your teachers and others but think for yourself.

I remember one of my teachers, who is wonderful—I mean I just had so much amazing respect for him and learned so much from him—but he thought George Bush was a great President. So I don’t just listen and “my teacher said so, so I believe it.” It’s like, that one…. No, I wasn’t going to…. [laughter] I wasn’t going to buy that one.

And also, we go to our teachers to learn the Dharma, not to learn politics, not to learn social economics, or any of these kinds of topics. So to really take Dharma principles and apply them to things, but do that in our own creative way. Because I think … becoming a monastic does not mean that we’re all coming out of the same cookie cutter. That doesn’t work because we all come into this world with different talents, different dispositions, different interests, and so I think we have to recognize that and work with what we have and use what we have for the benefit of all beings instead of trying to make all fit into the same square hole—especially if you’re round, or star-shaped, or triangular-shaped, or whatever. Use the beauty of your own shape to benefit sentient beings instead of like squeezing yourself trying to be something you’re not.

I learned that trying to be a Tibetan nun, and there was no way I could fit into how they were supposed to act.

And also be transparent, and don’t be defensive, because everybody knows our faults anyway, so when somebody gives you some feedback listen. If what they say is right, say thank you very much, I’m working on it. There’s no need to try and paint a pretty picture of how, “Well, I really didn’t mean this, and this got … blah blah blah….” Instead of just saying, “You’re right, I didn’t tell the complete truth.” Just say what is and don’t feel ashamed about it, rather than trying to justify and get defensive, when everybody knows what happened anyway.

I mean if people have gross misunderstanding, of course, correct that and give them the proper information. But transparency, I think, works very well for us psychologically. Rather than covering things up, just … if we broke a precept, there it is. And then we stop all this self-recrimination and guilt and shame and junk like that that really gets in the way of practice.

So the importance of confession and just saying it, here it is, instead of, “Well, you know, I did that but it’s really that person’s fault….” You know? Own our own responsibility in things. But don’t own what isn’t our responsibility.

Have a long-term view. Be content to create the causes in your practice by following the teachings, and stop waiting for grandiose flashes of insight to occur, and instances of samadhi that then you can go tell everybody you’ve had. But just be content to do your practice.

So that’s what I thought of so far. Anybody have questions or comments?

[In response to audience] Right, it’s a balancing act between learning from others and thinking for ourselves. And especially at the beginning you really want to learn and listen. But again, even as you’re learning and listening you have to think about the teachings yourself. If somebody says you have a precious human life, do you just go, “Yeah, I do, because you said so?” That’s not going to bring stability in your practice. Whereas if you really think for yourself about what the qualities of a precious human life are then it really comes home in your heart what you have.

[In response to audience] Yes, it’s a balance thing. You don’t want to be so opinionated that you can’t learn from anybody, because that’s useless. Then you become very unhappy as a monastic because you think that you’re very close to enlightenment and nobody’s listening to your wonderful opinions that you’ve had all your life about what everybody should do. So those things have to be given up (in order) to be a happy monastic. Actually, just to be a happy person, period. If we have too many opinions, and we grasp onto our own ideas and opinions too strongly, we’re going to be quite miserable.

Even my sister, who’s not a Buddhist, she said that in a recent email. She has two teenaged kids and her kids are really good, they’re not the rebellious type, but she said, “I’m really learning not to have too many opinions because they just get you into trouble.”

[In response to audience] So you’re saying that when your mind’s very confused then it’s better to err towards the side of listening to somebody who has more wisdom and compassion than you do, who can give you solid advice and guidance. Yes, for sure. For sure. But then you definitely have to work it out with your own mind so that you understand that guidance that you’ve received and then can apply it to your own mind in the future. So you internalize that advice. 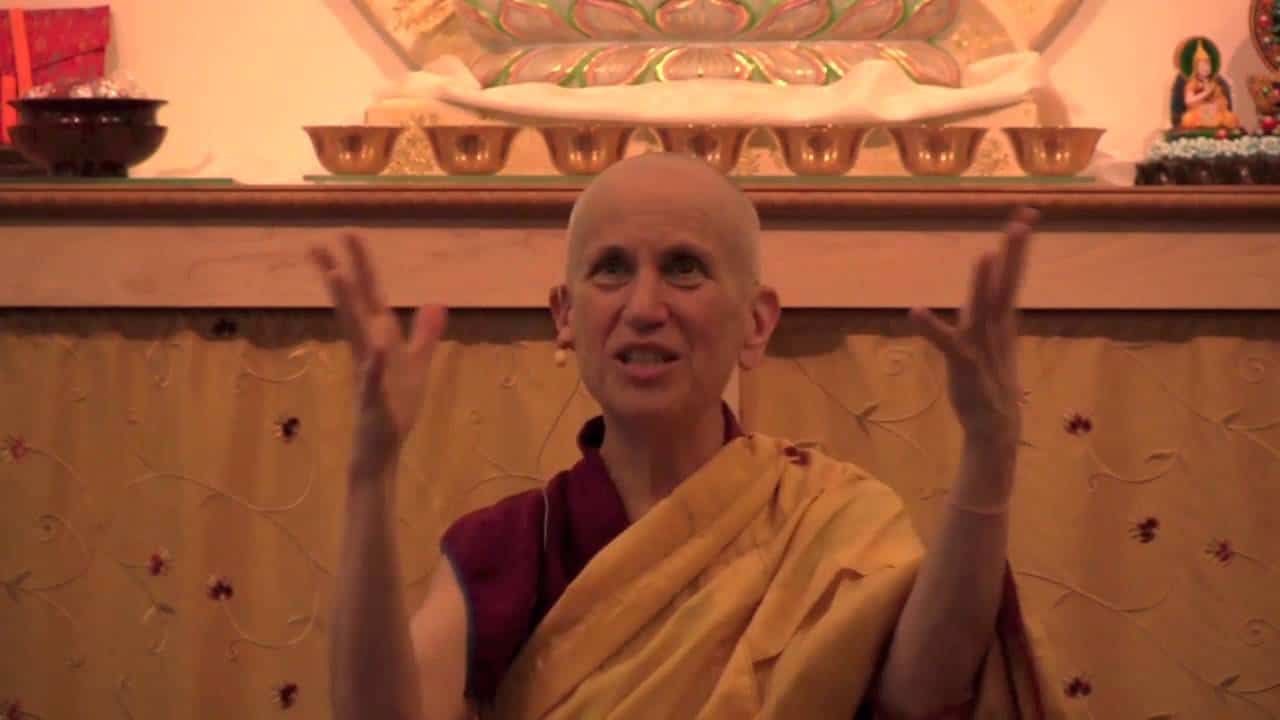