Sixth in a series of talks suggesting how to modify the steps in a 12-step program to fit into a Buddhist framework.

So just to finish up with what he was asking about the “higher power” and the 12 steps. He said: “Essentially I’m asking whether the word ‘God’ can be changed to Dharma in the above list and still be in line with Buddha’s teachings, or would this be a wrong track to go down in terms of my understanding of what Buddha’s Dharma is?”

I think that’s fine. And I think we kind of rewrote it to include not only the Dharma, but the Buddha and the Sangha—the Buddha as the one who taught the Dharma, the Sangha as the ones who’ve actualized it. Especially the Arya Sangha who have direct realization of emptiness, and so are reliable guides.

So again here, when we’re doing these kinds of visualizations we’re dealing very much with symbolism. And the visualizations are helping us to gain certain mental states. So when we visualize Chenrezig, let’s say on top of our head—or Medicine Buddha, or Vajrasattva, whoever it is—and light’s flowing down and purifying us, what we’re doing is we’re doing it within the context of the four opponent powers—so, having regret, determination not to do it again, restoring the relationship, and then that practice is the antidotal behavior—we’re doing it within that context, and by imagining Chenrezig filling us with white light what is happening is, number one, we are learning to forgive ourselves, and that process of forgiving ourselves releases us from a lot of the guilt and shame and so on that we feel about our negative actions. And that is very important in order to progress on the path. Because as long as we remain locked in this view of, “I am inherently existently contaminated, and unworthy, and defiled, and I’ve done these actions and they are now ME.” As long as we retain that outlook on ourselves it becomes very difficult to practice the Dharma because there’s no mental space for us to conceive of ourselves being any different. So that visualization helps us relieve that mental state.

So it’s not, like, an external Chenrezig is coming and saying, “I now forgive you my child.” Even though sometimes the prayers may make it sound like that. It’s actually a whole psychological process of our connecting with Chenrezig and connecting with our own potential inside of ourselves so that we can release what needs to be released and cultivate what needs to be cultivated.

So, as you do these practices, you know, the practices themselves trigger you to think, “Well, how is this really working, and what am I really doing?” In other words, when we do these practices we aren’t just plugging ourselves into a formula of, “Well, it says say 100,000 so blah blah blah blah blah … I say 100,000.” No. It’s challenging us to really deepen our understanding of how the path works. And what is the Dharma that we’re trying to actualize, and how do we go about doing it?

So we have to think about these kinds of things. They’re not necessarily readily apparent. And I’m giving you much more explanation than my teachers gave me.

So: “It seems that the idea is, one, we can get to enlightenment on our own; or two, rely on the Buddha or our teachers doing it for us, are both wrong.”

In other words, relying on one or the other doesn’t work. But what we need is a combination of the awakening activities of the Buddhas and listening to the teachings, and our own effort to think about the teachings and practice them. So we need that combination.

So he says: “It seems that it’s a partnership between ourselves and the higher power that is the Buddha, Chenrezig, and so forth. Is this a correct understanding?” 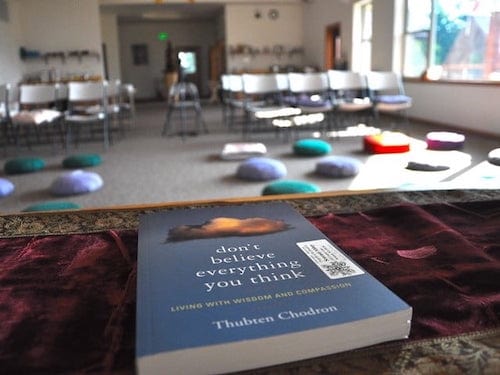 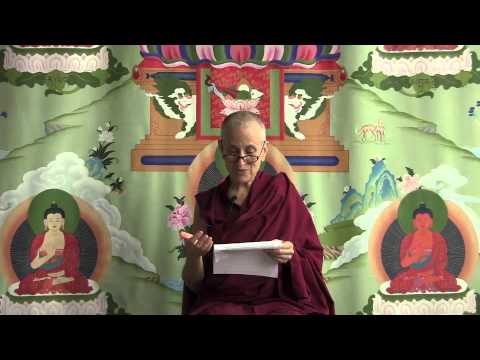