You are here: Home > Practical Buddhism > Buddhism in Daily Life > Health > Making requests and self-reliance
By Venerable Thubten Chodron on Mar 6, 2013 in Health 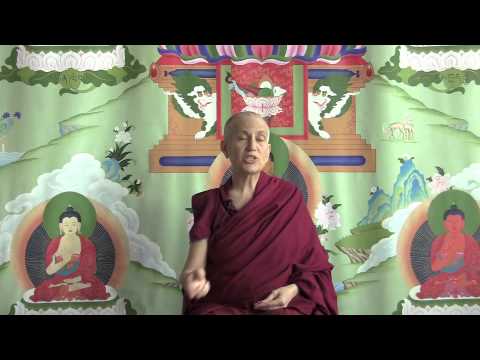 To continue with our little series on Buddhism and the 12 steps, talking about the “higher power,” and what it means to be self-responsible and self-reliant. What it means to ask for blessings and inspiration.

The person who wrote me said: “As we know, Siddartha Gotama, the historical Buddha, died 2500 years ago. Because the Buddha attained enlightenment does this mean that his consciousness is out there somewhere available to us so that we can request his mind to help us in some way? It’s interesting that you don’t say we should ask the Buddha to help us. Instead you say that we should ask him to inspire us, which is far more self-empowering. We’re not asking him to fix it for us, but we are asking for help to see through our delusions so that we can fix it for ourselves. It infers that we need to do the work ourselves, but we need to be shown the way. Am I right so far?”

So yes. As I was explaining the other day, in the Mahayana tradition we say that Shakyamuni Buddha was actually enlightened in previous times, and when somebody attains full awakening they attain the four Buddha bodies. And one of the Buddha bodies is the emanation body, and one type of emanation body is the supreme emanation body that manifests during a historical era when the Dharma teachings are not present on the earth. And so that kind of manifestation was Shakyamuni Buddha. So although that manifestation was withdrawn, dissolved back into the dharmakaya, and it looked like the Buddha died, then the continuity of the enlightened mind still exists. It’s not that you become enlightened and then the consciousness stops. Because if it stopped after you left your physical body, then that would mean you work for three countless great eons to become enlightened, and then in the case of Shakyamuni Buddha, then we’d only have forty-five years of actually helping sentient beings.

But we don’t say that. We say in that manifestation he benefited sentient beings for forty-five years, but the continuity of the Buddha’s mind still exists, because there’s nothing to make it stop existing. It’s one moment of consciousness produces the next moment.

So that’s about the first part of the paragraph.

And then yes, I think it definitely is more self-empowering to request the Buddha for inspiration, and for help in learning how to deal with situations ourselves, rather than seeing the Buddha as some kind of external being who is the creator and manager of the world who we have to please and who then will maybe do what we want him to do.

That’s what it feels like, isn’t it? If you say, you know, “Oh, Buddha Buddha Buddha, please may my son do this, or my daughter do that. And may family win the lottery, and may my kids get into good schools, and may we all get promotions in our jobs, and may we all get enlightened quickly. And while you’re working on all of that, we’re going to go on summer holiday to the beach.” [Laughter]

It doesn’t work that way. It doesn’t work that way. So what we’re really doing when we’re making requests, saying request verses—and it’s actually better to say, like, “recitations” rather than “prayers.” Or “requesting verses” rather than “prayers.” We often use the word “prayers” because it’s what we’re familiar with from Christianity and Judaism and Islam. But “prayers” kind of implies that you’re asking somebody outside to do something for you. And so if “prayers” implies that to you then we have to get rid of that kind of implication in our minds. Because, as we’ve been talking the last few days, we have to do the work for ourselves, and the Buddhas teach us and guide us and inspire us and help us along the path, but we have to do the work.

So, I think a lot of the times when we’re in difficulty and we need help, we may instinctively say, “Buddha, please keep this guy from punching me,” because it looks to us like the problem is the outside person who is going to punch us. But when we think deeper about it, it’s like, “Please inspire me so that whether this guy punches me or doesn’t punch me, I can have compassion for him.” Because that’s what’s far more important in that situation is that we have compassion. If we created the destructive karma that is now ripening in somebody punching us, how can the Buddha stop that? The force of our karma is going in one direction. The Buddha is not a creator and manager and can put up a road block. But a Buddha can inspire our mind so that whatever happens in the situation we keep a Dharma attitude, and in that way we transform that situation into the path to awakening and we avoid creating more negative karma in the situation that will only produce more suffering in the future.

So in some cases, maybe, if we pray “Buddha please keep this guy from punching me” maybe there’s some karma that is malleable at that moment and the Buddha can create a condition where it’s not going to ripen, or another karma will ripen instead. But that’s Buddha creating a condition. He is not changing the karma or making karma ripen or not ripen. Because that is not something a Buddha can do. Karma is simply cause and effect. So you can interfere with the flow of cause and effect, but you can’t pick a cause up and take it away and make it vanish like that.

And so, in general, in a lot of the sadhanas that we do on a daily basis, and the recitation, when we’re making requests what we’re really trying to—like I was saying before—state to ourselves what’s important and then think of the Buddha inspiring our minds and making ourselves receptive to the Buddha’s enlightened activity. Because there is something that does come from the side of the Buddhas when we receive inspiration, when we are open to their enlightened activity.

I remember one time discussing this with His Holiness, and kind of “why are we requesting the Buddhas for inspiration, what’s this whole thing about?” And His Holiness said, “Well, what would happen if you asked FDR for inspiration?” And I thought about it. Okay, I mean I liked FDR as a President, from conventional standards, but when I think, Okay, he also is responsible for the killing of quite a number of people, he was President during the war. And I don’t know the extent of his spirituality… His wife was pretty cool. Eleanor was very good. But does FDR even have the capacity to inspire my mind on the path to awakening? Either from my side and what I think of him, or from his side and his potential as a President. Could he issue a posthumous Presidential decree? “I now bestow inspiration…” And somehow when I think of wanting to improve myself spiritually, I wouldn’t request FDR for inspiration. That’s not the model of what I want to become. And also, from his side, I’m really not sure what he could do.

And so then, thinking okay, a fully awakened Buddha is going to have powers and abilities that even a President doesn’t have. And a fully awakened one is going to have wisdom and compassion that a President doesn’t have. And that’s more the role model I want to become, and that’s more someone who actually has the abilities to affect my mind in a positive way. From my side, of how I view him. And from the Buddha’s side of what the Buddha’s qualities are. It works in both directions.

Making our minds receptive to the Dharma
Siksamana and bhikshuni ordinations