We are continuing with the Vajrasattva practice and the four opponent powers. Today we’re moving onto the fourth opponent power which is the power of determination. If you’re like me and you need these little tricks to remember things, this is the fourth R. There’s the power of reliance, the power of regret, the power of the remedy or the power of remedial action, and the power of resolve. So this is where we’re making a strong determination to refrain from the negativity that we’ve brought up to purify in the practice, and making a strong intention to transform our minds. Also, here we’re going to promise Vajrasattva that we are going to refrain from doing in the future. This is where “the rubber meets the road” or “we walk our talk.” It’s a very important part or piece of the practice.

The strength of our resolve or determination is based on the power of our regret. It’s so important that we understand that our actions in the past have caused ourselves suffering and others suffering. So we go into the past and bring that up into our mind. Also, as we’ve heard over the past few weeks, we have to understand the law of causality regarding our actions—and know that there is still suffering to be had in the future unless we purify. We really have to get this on some deep level so we have not only a deep heartfelt sense of regret for what we’ve done, but also a concern about the suffering results that we’re going to experience in the future.

So we’ve got the past actions and we bring it into our minds. We’ve got the future concern and we bring it to our mind. On that basis we cultivate the present determination to refrain from this particular negativity. If the regret isn’t strong, heartfelt, and isn’t real in our own minds, not only are we not going to be successful in purifying the negative action, but we’re not going to have enough “oomph” in our practice to then make the determination to refrain from the negativity in the future.

The power of determination also focuses on that third karmic result—which is the result similar to the cause regarding our behavior. The behavior that we have habitually committed over and over again, brought forth from past lives—this propels us to create these negative actions that are so habituated that they seem to have a mind of their own. These negative actions really have quite strong propensities in our life so that the words are “out of our mouths” or the actions are “out of our bodies” before we even realize it. Many of the teachers have said this is a very important point because this is how we create the future suffering. So the power of determination really takes care of this in a very strong way.

We’ll go to the Vajrasattva sadhana practice now and then we’ll talk a little bit more about the power of determination. In the first paragraph we address Vajrasattva.

Through ignorance and delusion I have broken and degenerated my commitments. O Spiritual Mentor, be my protector and refuge. Lord, Holder of the Vajra, Endowed with great compassion, in you the foremost of beings I take refuge.

Now I’ve read this paragraph quite a bit in the past few weeks and I find this to be an extremely powerful and clear statement of fact. This is one of the powers, or one of the results of doing purification. That is, your mind gets clear on understanding what is the cause of suffering. What it’s saying here is that ignorance is the primary cause of our suffering. There’s the ignorance that doesn’t know the consequences of our actions. With that type of ignorance we basically don’t know what to cultivate and what to abandon. We haven’t a clue. That’s the first kind of ignorance.

Then the other main type of ignorance is this conjuring up or grasping onto this sense of “I” that is solid and permanent and eternal and exists from its own side. We’ve spent since beginningless time apparently defending and protecting and satisfying this “I”—that’s somewhere inside this body and mind, that we grasp onto that’s sort of running the show. Also the ignorance that the things outside of this “I” also existing permanently and solidly and concretely; so we grasp at them as either the cause of the happiness of this “I,” or we grasp at them because we believe that they’re what is causing the suffering of this “I.” Definitely we are not seeing things clearly at this point when we’re doing this and that’s the ignorance.

Then the delusions are a result of this self-grasping ignorance. So then in our lives arises the anger, the attachment, the deception, the ill will, the jealousy. With the wrong conceptions and then exaggerated by the afflictions that arise in our mind, we’re compelled. We’re compelled by the ignorance and by the afflictions to break and degenerate our commitments. We’re thus compelled to commit the actions that we’ve been talking about for the past few weeks—the ten non-virtues, any of the precepts that we have taken (the monastic training precepts, our lay precepts, our bodhisattva vows, our tantric vows). All these are broken because of this self- grasping ignorance, the afflictions, and then the karma or actions that we are propelled to do.

From doing this practice and saying this particular sentence we are taking responsibility and understanding the second noble truth. Even if it’s just intellectually, we’re getting the idea that we are creating our own suffering due to the ignorance and the afflictions.

Here we go. So we’ve got the clarity and the wisdom, and now what do we do? Second sentence:

O Spiritual Mentor, be my protector and refuge. Lord, Holder of the Vajra, Endowed with great compassion, in you the foremost of beings I take refuge.

Here we go back to refuge. We took refuge in the beginning of the practice and we’re now back to taking refuge for here we are understanding that Vajrasattva is the embodiment of the Three Jewels. He has all the qualities of all the Buddhas of the ten directions. He has all the powers of the Buddha. He has the realizations and the cessations of the Dharma in his own mind.

I envision our mind at this point in the practice with this clarity. The wisdom mind is arising somewhat like a compass. That compass is now pointing its direction, its needle, in the direction of Vajrasattva who’s sort of like a north star.

Here we go back to recommitting, remembering, and recollecting why we take refuge. Why we go in the direction of seeking the guidance of one who knows, one who has freed himself from defilements, one who has cultivated all of these good qualities. This really empowers our determination not to do the negativities again—because now that we’ve got our mind steered in a virtuous direction it’s going to really empower and enable us to keep those promises.

Another thing that I’ve been thinking about is the question one of the retreatants here asked which was, “Why do we take refuge with Vajrasattva here in the sadhana? We’ve already taken refuge in the beginning of the sadhana?” I happen to think that there are never too many times that we could take refuge in the course of the day. I mean as far as my life goes, I am ‘off course’ a lot during the course of the day. By taking refuge it’s like I’m doing these course corrections, kind of getting my bearings—thinking about the qualities of the Buddha, thinking about something of Dharma that I’ve remembered, an antidote or a teaching that’ll bring my mind back to virtue. And so taking refuge as many times in the day as you can, as you want, as you remember, is just another way to empower the virtue in our minds.

I really don’t think that Vajrasattva is up there going, “Alright, this is the seventh time you’ve taken refuge. Alright already, I heard you the first time!” He’s going to be so delighted because he sees our efforts to turn towards virtue. As we do this practice I’ve discovered over the years that the understanding of the statement about what the cause of our suffering is and what our true source of refuge is deepens. It really gets quite clear and very strong. 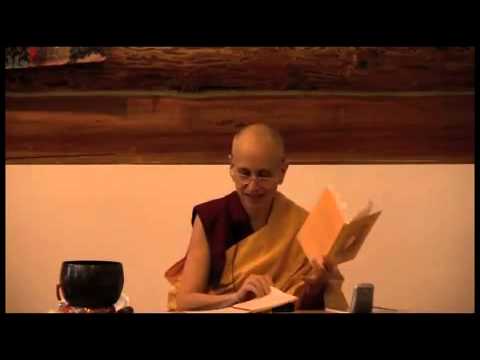 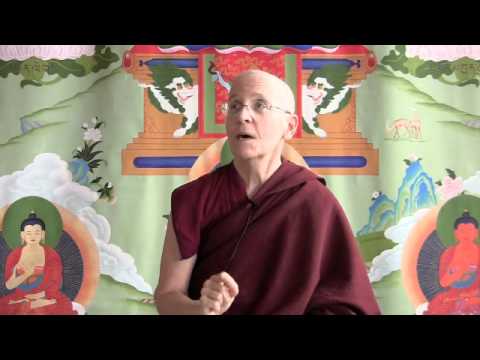 Power of resolve: Rooted in regret