We’re very happy that you’re here with us and that we’re here with us—all 29 of us on retreat. Today is the time to talk about the wonderful, amazing 100-syllable mantra of Vajrasattva. I thought we’d start by giving a gift to one another and all of our friends who are listening and who will listen, by doing three of the 100-syllable mantras with a lot of energy and a lot of enthusiasm so they can hear it how it’s done here at the Abbey:

Wow, okay—that was good! That had the energy.

I’m going to say a few things about the mantra. I don’t know very much about it even though I’ve done a three-month retreat on this and am sitting again happily with the Vajrasattva group. I realized in listening to Venerable Chodron and looking up a few things, that there’s so much to know about this mantra. Everything is in it. I guess to really understand the mantra we’d have to understand emptiness and the entire path. It’s all in there and I am not going to be able to explain that in seven or so minutes.

I’ll share a few thoughts that have been helpful to me. The first one is that mantras are for mind protection—whether we understand that or not. I was trying it out a lot this morning. Every time my self-cherishing started getting anxious about, “I’m going to be sitting in the chair talking,” I would just go, “Stop!” And I would just start the Vajrasattva mantra and that nervousness and those thoughts would just go. It works that way. That’s how it’s to be used. If you are walking around, you start getting angry, just say “Stop!” Start the mantra and you’ll see. It does protect your mind, it just does. Somehow your mind gets filled with Vajrasattva and there’s no room for this other blah-blah that’s going on—which is really just the self-centeredness talking with us as though we live with an insane person.

I mean really, it’s getting clearer to me that way. It’s like I don’t want to listen to her too closely. I also don’t want to totally ignore her, because it’s kind of mixed up with the conventional self for us who don’t understand, and we want to know what our needs and feelings are. When she kind of goes off on things, that’s okay—just be over in that corner going off on things. But I don’t need to come with you, and I’ll be over here with Vajrasattva. Also, of course, we can put Vajrasattva over those parts of ourselves.

The meaning of this mantra is that, and this is done in the form of making a request. I re-listened to Venerable Chodron’s teachings last winter at Vajrapani Institute about this mantra. Who are we making a request to? Here’s what she says:

Although we seem to be requesting from some being outside of ourselves, we are really reminding ourselves of what we want to cultivate.

Isn’t that wonderful? That’s what we’re doing. We are just remembering our own buddha nature by doing this. We project our future buddha (Venerable Chodron’s words) along with the buddhas that already exist, and we put it outside ourselves and visualize it. Then we use it to purify ourselves and then we melt it into us. This is because we are so used to seeing things externally; we think this is how the world works. This is the Buddhist skillful means—to work with how our minds work. So we take it, we put it out there, it’s a reflection here of all the buddhas, then we bring it back in. You can see how it’s this beautiful cycle constantly showering ourselves with the wisdom of the buddhas.

Another important point is, if you have close friends, relatives, people, or groups of people that you are concerned about in the world right now, you can visualize them around the HUM at your heart. The 100-syllable mantra and HUM are [visualized] at your heart. You just pour this beautiful nectar down on them and you can also then expand that from your special group so that we practice equanimity and include all beings. You just start thinking in this infinite way—which is really kind of relaxing I find. Watch your mind when you work with this. I find that when I tighten down on a person I’m worried about, or a small group I’m worried about, my mind starts to tighten a little. When I open up and say, “May I treat all beings this way,” my mind relaxes. It’s like it just gets vast.

I also wanted to say a little bit about the translation. Actually I want to read the summary of the meaning for anyone who doesn’t have the red book [Pearl of Wisdom II]. [Note: The text that Zopa is reading can be found here.]

The summary of the meaning of this mantra is absolutely gorgeous. So I’ll take a little time to read it.

So every buddha, this mind is there, there’s nothing missing.

You’ve destroyed every obscuration, attained all realizations, and passed beyond all suffering; the one gone to the realization of things just as they are.

So to absolute reality. No confusion.

Do not forsake me.

Sorry, I guess I am feeling a connection. I didn’t intend to cry here.

Please make me closer to your Vajra holy mind and grant me the ability to realize the ultimate nature of phenomena.

So we’re saying: please let me know what you know, which is our nature. This is what we are trying for and we can do this.

Please help me to realize great bliss, lead me to your state, and grant me all powerful attainments. Please bestow upon me all virtuous actions and glorious qualities.

I realized that I say this so mindlessly in my practice. It was really good for me to stop and study this mantra and listen to what Venerable Chodron had to say. It’s really come alive for me in a new way.

The very last thing I want to do is tell a story on myself—a story about my past arrogance. I hope it’s totally passed. Khensur Wangdak very kindly came here during our three-month Vajrasattva retreat [2004-5]. He gave us a wonderful commentary on the 35 Buddhas purification and then he opened up for questions. I had been wondering, “What am I doing sitting up on this hill, saying this mantra. I don’t understand it. It’s in a language I don’t get, it all seems so foreign, but here I am.” So I said to him through Jeff, the interpreter, “Now, I am a Westerner, Venerable, and I want to know how this mantra works.” Like, I want the mechanistic method. Jeff said something to him and then Khensur Wangdak smiled back and said, “The method is in the mantra.” And I thought, “Oh, he didn’t understand my question.” Ay! Boy…. It’s embarrassing, but I was trained as a lawyer. He did not understand the question. I am going to restate the question. So I said it again, “No, I really want to know how is it working? Like for Westerners, how does this work?” And I was waiting for something like, “Oh, the vibrations … da da da….” He just smiled so sweetly and he said, “The method is in the mantra.” At least I had the wherewithal to stop at that point.

As I did the retreat and as I’ve done this mantra for a number of years, and now seriously doing it again, I really get that the method’s in the mantra. We go back to Venerable Chodron’s latest words to us, what she keeps saying in this retreat over and over, “Do the practice. Just do the practice.” And let go of all this expectation such as it’s got to be like this and that, and “I need a vibration explanation, I need science.” Just let go. Do the practice. Trust our teachers who’ve developed their qualities to the point that we want these qualities. This is what they did. As I take my baby steps, and maybe hopefully some teenage steps towards this, I start getting it that the method’s in the mantra. So enjoy it. Please do it and then dedicate for the welfare of all beings. 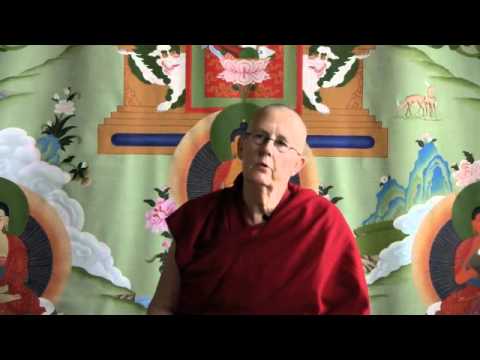 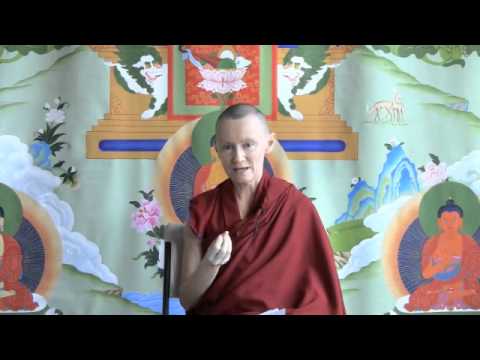