Power of remedial action: The antidote

Power of remedial action: The antidote

In the Vajrasattva practice doing the visualization and reciting the hundred-syllable mantra is the remedial action in that practice. That is what we have been doing. In the sadhana, in this part, it says that:

From the HUM at Vajrasattva’s heart, light radiates in all directions requesting the Buddhas to bestow their blessings.

As we do that visualization, really imagine these really strong light rays going out in all directions from Vajrasattva’s heart, calling upon all of the Buddhas to come and bestow their blessings. And:

They accept the request and send white rays of light and nectar, the essence of which is the excellent qualities of their body, speech, and mind.

Then again, the visualization is of imagining all of that light and nectar coming back to Vajrasattva.

This light and nectar absorb into the HUM and the letters of the mantra at Vajrasattva’s heart. They then fill his whole body completely, enhancing the magnificence of his appearance and increasing the brilliance of the mantra.

When we do this visualization, it gives us a chance to feel like we are in the presence of Vajrasattva. That he is actually above the crown of our head. He is looking upon us with total acceptance, with absolutely no judgment at all, just love and compassion. His whole agenda is just to try and be of benefit. That is what he is doing.

And then the sadhana goes on

While reciting the mantra, visualize that white rays of light and nectar stream continuously from the HUM, and the mantra at Vajrasattva’s heart. They flow down through the crown of your head and fill every cell of your body and mind with infinite bliss.

Now when the white light and the nectar are flowing into us, it is not filling us up with disgust and hatred for the negativities that we have created. It is really important at this point to check your mind to see if you are holding your negativities in a very solid, unchanging way—similar to a big brick that you then carry around with you that is just this solid identity.

If you feel like that is what is going on, or you notice that it really seems to be something that is impenetrable, something you cannot change. Then it is important to remember that this is the work of the self-centered attitude. This is our enemy, and it is not part of us. It is an affliction. What we want to do is turn our mind to think about and anchor ourselves in our regret. It’s this heartfelt regret, “I made a mistake. That is all it is. I made a mistake and I want to repair that mistake now. I want to transform it. And with this practice I can do that.” At this point now I feel so much relief. I have found something that actually works to change these negativities so that I don’t experience their suffering result. We really want to make sure that our mind is in that proper place as we then do the visualization and let the light and nectar stream in.

There is a good story in Liberation in The Palm of Your Hand by Pabongka Rinpoche, where he explains or describes about Atisha. Atisha was that great lama from India who traveled to Tibet to reestablish the pure Dharma in Tibet. There are stories that he would be walking about, or even on his horse or whatever, traveling around. He would stop what he was doing when he noticed that he had a negativity of some kind—body, speech, or mind. He would stop immediately what he was doing. He would go down on his knee and he would purify it immediately with the four opponent powers.

That story tells me a lot. It tells me that if a great master, who is highly realized, is using the four opponent powers at that stage there is not even a need to talk about what I need to be doing. Also it tells me that it can be used not only just in a formal practice time but any time. You can apply it anytime that you are aware that you have had a negative or non-virtuous thought or action. I think the reason why Atisha was practicing this way is because he understood the workings of negative actions or negative karma.

There are four aspects that, if we keep these in mind, will keep us embedded in purification practices. If we do a negative action, it is certain to bring suffering. This karmic action, this seed, doesn’t get lost. It doesn’t somehow disappear magically. It stays with us. It grows exponentially. It’s similar to if you take a loan, a big sum of money, the interest keeps accumulating, moment- by-moment. Then most important is that if it (the negativity) is eradicated by purification, it will not bring a suffering result to us. That’s the important point.

So purification practice is our friend. It is not something that we beat ourselves up with. It’s something that is very helpful and that we are going to be doing for a long, long time. We want to get really familiar with it and very comfortable with it. Have a mind of relief. Actually, it can be joyous, “Whew, it is so good that I found this and now I am going to apply it. And this is going to transform what I would otherwise experience in the future. This is good news.”

Next time I will talk a little bit about the scriptures, the sutras. They talk about the different remedial actions that we can use. 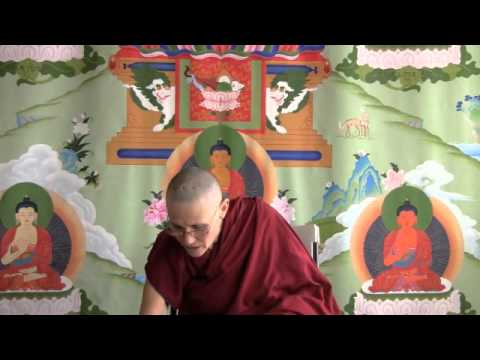 Power of regret: Identifying the causes 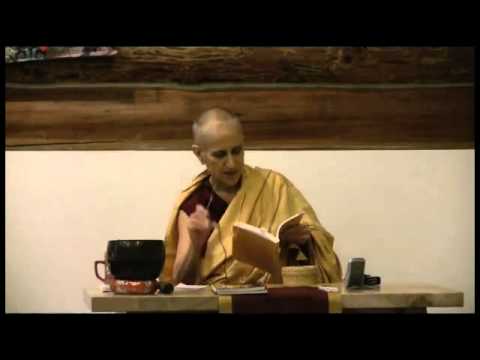