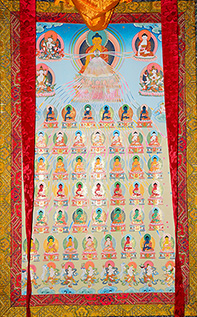 The 35 Buddhas. Click here to enlarge. (Image by Tara Shaw)

There are a variety of purification practices, The Bodhisattva’s Confession of Ethical Downfalls being one of the most popular. This text is also called The Sutra of the Three Heaps because the prose text after the names of the thirty-five Buddhas deals with three important topics: confession of downfalls, rejoicing at our own and others’ virtues, and dedication of merit. We all have done actions that we now feel badly about doing, and we have aspects of ourselves that we do not like and wish to change. Purification practices are excellent means to remove emotional burdens such as guilt, as well as to pacify the obstacles to our happiness and self-improvement created by the imprints of our destructive actions. Guilt over past actions is useless, only leaving us feeling helpless and hopeless. On the other hand, acting to purify the destructive imprints and afflictions is very productive. It helps us to change our bad habits and subdues obstacles to long life and success in our spiritual practice.

These four opponent powers are found in The Bodhisattva’s Confession of Ethical Downfalls, the Vajrasattva meditation, and other practices.

The Bodhisattva’s Confession of Ethical Downfalls: Prostrations to the 35 Buddhas

There are several visualizations of the 35 Buddhas. The easiest is to visualize Shakyamuni Buddha, golden in color, with 34 light rays coming from his heart. These light rays form five rows and upon each ray is seated a Buddha. The Buddhas in each row resemble one of the five Dhyani Buddhas. 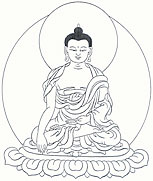 In the first row are the next six Buddhas mentioned in the prayer. They resemble Akshobya Buddha, blue, the left hand in his lap in the gesture of meditative equipoise, the right hand in the earth-touching gesture (on the right knee, palm down). However, the One Thus Gone, the King with Power over the Nagas, looks slightly different: he has a blue body, a white face, and his hands are folded together at his heart. 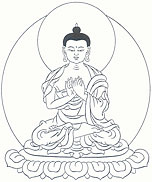 In the second row, the next seven buddhas resemble Vairocana Buddha, white, with both hands at the heart, the index fingers extended. 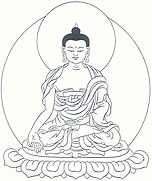 In the third row, the next seven buddhas resemble Ratnasambhava Buddha, yellow. His left hand is in meditative equipoise, and his right hand is in the gesture of giving (on the right knee, palm outwards). 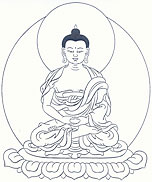 In the fourth row, the next seven buddhas resemble Amitabha Buddha, red, with both hands in meditative equipoise on his lap. 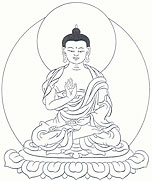 In the fifth row, the next seven buddhas resemble Amogasiddhi Buddha, green. The left hand is in meditative equipoise and the right arm is bent at the elbow with the palm facing outwards.

After reciting the names of the 35 buddhas and the prayer of the three heaps—confession, rejoicing and dedication—you may also want to recite the “General Confession.”

After this, visualize the 34 Buddhas dissolve into Shakyamuni Buddha. He comes on top of your head and melts into golden light. The light descends through the crown of your head and goes to your heart chakra, in the center of your chest. Feel that all destructive karma and obscurations have been completely purified and that your mind has become inseparable from the Buddha’s pure mind of wisdom and compassion.

To increase the benefit of each prostration, first prostrate three times while reciting:

Continue to prostrate while reciting the names of the Buddhas and the confession prayer.

To the Founder, the Transcendent Destroyer, the One Thus Gone.1 the Foe Destroyer, the Fully Awakened One, the Glorious Conqueror from the Shakyas I bow down.

(Optional: If you wish to bow to the seven Medicine Buddhas)

All you 35 Buddhas, and all the others, those thus gone, foe destroyers, fully awakened ones and transcendent destroyers who are existing, sustaining and living throughout the ten directions of sentient beings’ worlds—all you Buddhas, please give me your attention.

In this life, and throughout beginningless lives in all the realms of samsara, I have created, caused others to create, and rejoiced at the creation of destructive karmas such as misusing offerings to holy objects, misusing offerings to the Sangha, stealing the possessions of the Sangha of the ten directions; I have caused others to create these destructive actions and rejoiced at their creation.

I have created the five heinous actions,2 caused others to create them and rejoiced at their creation. I have committed the ten non-virtuous actions,3 involved others in them, and rejoiced in their involvement.

Being obscured by all this karma, I have created the cause for myself and other sentient beings to be reborn in the hells, as animals, as hungry ghosts, in irreligious places, amongst barbarians, as long-lived gods, with imperfect senses, holding wrong views, and being displeased with the presence of a Buddha.

I confess all my destructive actions separately and rejoice in all merits. I implore all the Buddhas to grant my request that I may realize the ultimate, sublime, highest transcendental wisdom.

To the sublime kings of the human beings living now, to those of the past, and to those who have yet to appear, to all those whose knowledge is as vast as an infinite ocean, I go for refuge.

[Click here for a detailed explanation of this practice by Ven. Chodron]

[Click here for a version of this practice in Chinese.]

O spiritual mentors, great vajra holders, and all the Buddhas and bodhisattvas who abide in the ten directions, as well as all the venerable Sangha, please pay attention to me.

I, who am named _________ , circling in cyclic existence since beginningless time until the present, overpowered by afflictions such as attachment, hostility and ignorance, have created the ten destructive actions by means of body, speech and mind. I have engaged in the five heinous actions and the five parallel heinous actions.4 I have transgressed the precepts of individual liberation,5 contradicted the trainings of a bodhisattva,6 broken the tantric commitments.7 I have been disrespectful to my kind parents, spiritual mentors, spiritual friends, and those following the pure paths. I have committed actions harmful to the Three Jewels, avoided the holy Dharma, criticized the arya Sangha, and harmed living beings. These and many other destructive actions I have done, have caused others to do, and have rejoiced in others’ doing. In short, I have created many obstacles to my own higher rebirth and liberation, and have planted countless seeds for further wanderings in cyclic existence and miserable states of being.

Now in the presence of the spiritual mentors, the great vajra holders, all the Buddhas and bodhisattvas who abide in the ten directions, and the venerable Sangha, I confess all of these destructive actions, I will not conceal them and I accept them as destructive. I promise to refrain from doing these actions again in the future. By confessing and acknowledging them, I will attain and abide in happiness, while by not confessing and acknowledging them, true happiness will not come.

Download a PowerPoint presentation of the 35 Buddhas by Stephen Wainwright (3.5MB)

Download a PowerPoint presentation of the 35buddhas_widescreen by Stephen Wainwright