You are here: Home > Practical Buddhism > Prison Dharma > By Incarcerated People > On Compassion > Unforgettable memories
By B. F. on Jun 18, 2011 in On Compassion 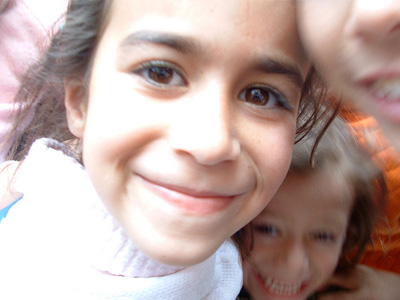 One snapshot in my mind’s eye exemplifies and personifies the war in Iraq. (Photo by Christiaan Briggs)

For the rest of my life, whenever I think about the U.S. invasion of Iraq, I am going to see Her. Do you know how your mind takes little snapshots of your day-to-day existence and stores them in the part of your memory I like to call the “mind’s eye”? You have a whole photo album in there. I have clear and distinct images (memories) from since I was four years old. Frozen moments in time, snapshots not on film but embedded in my mind. There are many, some clearer than others, some more enjoyable than others, some that wrench my heart, and some that make me smile and laugh inside. But the one snapshot in my mind’s eye that to me exemplifies and personifies the war in Iraq was not the large statue of Saddam being toppled or of bombs going off at night in Baghdad. My first memory of it will always be of Her.

I watch Spanish television to help me learn Spanish, and while I was watching Univision’s Las Noticias, I saw Her. Univision was airing reports from a Spanish news reporter and Spanish news crew that were in Baghdad before, during, and after the hostilities. They were showing things that the American media was not, namely civilian casualties and Baghdad neighborhoods that had been affected by the inordinate amount of U.S. bombing. One report showed the result of a stray “smart bomb” that landed in a neighborhood—the crumbled buildings and dead civilians, and it showed Her.

She was an Iraqi girl of four or five years of age, and she had the misfortune of being near the bomb blast. The TV report showed her being carried on some kind of jerry-rigged stretcher. She had lost both arms and one of her legs, the bloody stumps covered in dirty rags and her eyes open, glazed over, deep in shock. When I saw that image of her, I knew at that very moment that I would never forget it. Never. I became so angry and sad and ashamed…and silent. I felt partly responsible for her. It was my country and my government that did that to her. This innocent, beautiful little human being had become what Rumsfield and generals call “collateral damage.” I cried for her and prayed for her. I’ve seen her in my mind’s eye about a million times. I feel a connection to her despite the fact that she is on the other side of the world.

At first I wondered if she lived or died. Was she capable of surviving with those terrible injuries? I was so angry. I thought, “I wonder what a weapon of mass destruction is to her four or five-year-old logic? What does she think a WMD is?” I considered the implications that this not-so-smart “smart bomb” was having in her life. This bomb put together by “good Christian, God-fearing people” that ultimately killed innocent women and children. I felt a lot of emotion and did much introspection for several days after that. That’s when I became less vocal and more pensive with respect to Iraq and the Iraqis and this unjustified invasion.

A couple of weeks later, after the Americans had taken Baghdad, I watched Las Noticias again, and the same Spaniard with his camera crew was reporting from Baghdad, Part of that report showed a hospital that was being re-supplied by the U.S. Marines…and there she was! She was lying back in a clean hospital bed, with clean bandages on her wounds. Three stumps that will hopefully be fitted with the latest in prosthetic limbs. There she was, with her little-girl face, neither smiling nor crying, but looking with curiosity at the camera.

Chodron, what can I say? I cried. Here’s this 6’4″ big tough guy sitting in the Spanish TV room with tears running down his cheeks. Crazy, huh? I’ve been in prison over 13 years, seen men stabbed, killed, and beaten. I possess many snapshots in my mind’s eye, some good and some unbelievably horrible, and just seeing that this little girl had survived and would grow up made me feel all soft and emotional.

I will always feel a certain responsibility for that little girl, because I am a part of the country that forever changed her life with that damn bomb. I’m sure many of my countrymen will forget about the suffering that we imposed in order to remove Saddam from power—and make no mistake, he was an evil, despotic, tyrannical dictator that needed to go—but I will never forget Her.

Transfer
The beauty of creating the causes