This interview appeared in Issue 16 of Awaken, the magazine of the Kong Meng San Phor Kark See Monastery in Singapore.

Awaken: Venerable, what spurred you to want to be a fully ordained bhikshuni? 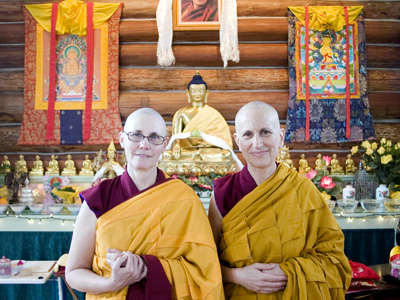 I started to reflect that I don’t have much time left before death strikes and when that happens, what sort of mind-state would I want to be in? (Photo by Sravasti Abbey)

Venerable Thubten Chonyi (VTC): I aspire to bhikshuni ordination. I will be eligible for that next year. I have been a student of Venerable Thubten Chodron for many years. I went to almost every retreat and teaching she taught in the city I lived in. Over the years, I received numerous teachings—the nature of suffering, the causes of suffering, the fact that our afflictions and karma can be purified and eliminated, that Nirvana is peace and that there is a path to liberation and enlightenment. Listening to and digesting those teachings, it slowly started to sink into me that what the Buddha said was true. Turning 50, I also began to really question what my life is about. I started to reflect that I don’t have much time left before death strikes and when that happens, what sort of mind-state would I want to be in? With that thought some years back, I began to think about ordination. I was initially resistant to the idea as I enjoyed my 19 years of full-time work in Reiki healing. It only became crystal clear to me that I want to embark on this path after being a founding member of establishing Sravasti Abbey, and realizing that as a layperson I couldn’t practice as deeply or as fully as I want to. It also helped that my teacher has established a monastery in the US and said, “If you want to practice deeply, come in.”

VTC: I’m blessed. I faced no obstacles of family or children. However, at the beginning, my 73-year old mother wasn’t too happy. Although she was supportive of me being a Buddhist for a long time, the very idea of shaving my head, giving up my career, and not having much contact with family didn’t go down too well with her. My mum always tells my siblings and me that we have to live our own lives. “I cannot dictate that for you,” she said. With that firm belief, she was trying to work out her great discomfort with me becoming a Buddhist nun. The change in mindset started for her one day when she was having a pottery lesson. She told someone in class about my plans to receive ordination, and that person broke into a huge smile and said: “Aren’t you happy? Aren’t you proud of her? That is the most wonderful thing a person could do. You should be so happy for your daughter.” That statement helped her to turn her thinking around. She then visited Sravasti Abbey with me so she could see the monastery I would be living in and also to meet Venerable Thubten Chodron. A year and a half later when my mum visited again, she went up to Venerable Thubten Chodron and told her, “I have never seen her happier in her life.” And she’s happy that I’m happy.

Awaken: How is a householder’s life different from a novice monastic’s life?

VTC: A monastic schedule is very structured. Our day starts at 5:30 am and is dedicated to practice, prayers, study, and offering service to the Three Jewels and to sentient beings. I could never achieve such structure in my lay life. Even though I had very stable morning and evening practices, they were sometimes long and sometimes short. Imagine doing just 20 or 30 minutes of sitting practice a day as compared to two or three hours of practice. I was also very socially engaged with friends and clients before becoming a monastic. But now, each day, the focus is on practicing, offering service and sharing the Dharma in outreach work such as counseling, prison work with inmates, answering emails on Dharma questions from all over the world, participating in interfaith gatherings, conducting Dharma teachings, meditation and life-skill classes in churches. I’m also absolutely clear that the benefit I’m offering in my work of sharing the Dharma is not just in this life, but in many, many lives, as we are planting seeds that would help people in the long term. My quality of life has increased significantly. Even though as a householder I enjoyed a good livelihood, did what I wanted, had good friends and relished a good relationship with a good Dharma teacher, I still experienced dissatisfactions. But being a monastic, I am working to pull away and get freed from the attachment that drives us in our lives, which is why my mum could see that I am happier.

Awaken: What have you learned now that you are a novice nun?

VTC: It’s so much more than I thought—to be able to spend my day and night just studying and working with my own mind through observing and overcoming the mental defilements. It is also an incredible privilege to be given the responsibility to share the Dharma whenever possible as much as I can. I learn something about myself, about the Dharma and what it means to be a monastic every day.

Awaken: How do you wish to contribute back to the Buddhist community?

VTC: I realize that just by assisting my teacher, Venerable Thubten Chodron, for a few days is so much more helpful and beneficial to so many more people than I had ever been able to help in my previous full-time job. I’m committed to giving the Abbey a strong footing and to devoting myself in whatever ways it takes to get this monastery going solid and strong in America. This is how I hope to contribute to the Buddhist community, to serve the Dharma and to serve all sentient beings.

Awaken: Venerable, do you have any anecdote or interesting personal experience to share after becoming a novice nun?

VTC: Well, I have a story on the impact the Abbey has had in our local community. It is a testament to the kindness of the nuns before me. I was the third nun ordained at the Abbey. At the Abbey, before receiving novice ordination, the candidate trains with the eight anagarika precepts, shaving the head and donning a grey training uniform. So the first time I went out to run errands and go to the bank as an anagarika, I was uncertain what I would encounter. But when I entered the bank with the deposit in my hand, facing the teller, who was a complete stranger, she started talking to me very warmly, “Oh, hi! It’s so good to see you,” and she continued talking as if she knew I was from the Abbey! The same thing happened at the other store. All because the previous nuns had been so warm and kind to them.

Awaken: What advice would you give to someone who is also thinking about getting ordination?

VTC: Meditate frequently on the four noble truths. I strongly believe that the only reason one should become a monastic is on the basis of a conviction that liberation is desirable and possible. We have to fully understand and deeply internalize that cyclical existence cannot provide us any true satisfaction.

Awaken: Any Dharma advice or last words to give to laypersons who would like to practice the Buddha’s teachings in this modern age?

VTC: I’m inspired by those who lead a householder’s life and yet have a strong practice, simply because it is not easy to practice in a householder’s life. So first, rejoice in the fact that you have a practice. Don’t feel guilty about being a householder but make time for practice. Then again, don’t feel guilty about not meditating if you really cannot, because that is no good either. We can practice by observing the Dharma principles in our daily life, for instance, abiding by the precepts in all that we do, practicing contentment with who we are and what we have, setting our motivation each morning when we go to school or work to benefit all sentient beings: that is practice too, everyday practice. So there are many ways to apply the Dharma in everyday life. As we let go of attachment, we will face less dissatisfactions.

Ven. Thubten Chonyi is a nun in the Tibetan Buddhist tradition. She has studied with Sravasti Abbey founder and abbess Ven. Thubten Chodron since 1996. She lives and trains at the Abbey, where she received novice ordination in 2008. She took full ordination at Fo Guang Shan in Taiwan in 2011. Ven. Chonyi regularly teaches Buddhism and meditation at the Unitarian Universalist Church of Spokane and, occasionally, in other locations as well.
View all posts by Venerable Thubten Chonyi →