“May all beings become monuments of enlightenment.”
This is the prayer of the bodhisattva when seeing a stupa.

That’s lovely, isn’t it? Becoming a monument of enlightenment. That doesn’t mean that we’re made out of stone, stand in a static rigid position, but it just means may we become a symbol or a representation of enlightenment. Wouldn’t that be lovely, to have the realizations within you where you become like a stupa, like a representation of enlightenment for other living beings so that whenever they saw you that’s what they thought about was the Three Jewels. When they saw you they thought about the potential to become enlightened, and where you would become an object of merit whereby other beings can create merit in relationship to you. That would be quite lovely. Thinking regarding all sentient beings, may they all become monuments for enlightenment. Quite a nice wish for ourselves and for them.

This gets into the whole discussion of stupas and monuments. In China and Japan they call it a pagoda. The Tibetan word is chorten, the Sanskrit word is stupa. The stupas have existed since the time of the Buddha, and actually I think they were pre-Buddhist. Buddhist ones appeared very soon after the Buddha passed away because they took his relics and they would build these huge mounds. Some of these still remain today. I think I was in Kushinaga and there was a huge stupa, like an actual mound, and then of course they began to make them in different shapes and forms. Now you have the stupa at Sarnath, the stupa at Bodhgaya, and all sorts of different places. Then the Tibetans started building many stupas. I think there are eight kinds of stupas. There might be more but the Tibetans often do a thing with eight different kinds of stupas that mark different events, or different potentials.

It’s quite interesting what you put inside of them. Usually in the lower part—in the base—you put all sorts of worldly items: pots, and pans, and even weapons, to symbolize worldly success so that you can be able to benefit sentient beings. On top of it you build the rest of the stupa and you put different holy objects and mantra rolls—like we do for the statues and precious things—in the rest of the stupa. There’s a whole symbology that grew as it developed. The Tibetans have it for the eight stupas with very precise measurements and symbology. I don’t know if that developed in Tibet or if that started developing in India. That would be an interesting thing to research, their symbols for all of the different levels, things like that.

I’m sure sometime here we will start building stupas. When we have the layout of our buildings a little bit more, then we will start building stupas and filling them. I mean that’s quite work to do it. Painting them and taking care of them, although maybe in the West we can do that better then in India because in India the paint is not so good. Every year you have to go back and redo it. But it’s quite nice to do that.

Rejoicing at conclusion of retreat 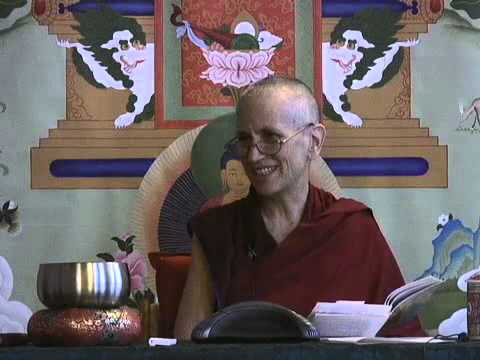