You are here: Home > Practical Buddhism > Prison Dharma > By Incarcerated People > On Compassion > Stateville
By R. L. on May 28, 2008 in On Compassion

R. L. describes his incarceration in a letter to Venerable Thubten Chodron.

A few months ago, without any warning, I was suddenly transferred from the Pontiac prison, where I had been for about 22 years, to Stateville Correctional Center. Indeed there are striking differences between the two. Stateville is a much larger prison, more imposing, and has an enormous wall surrounding it. It was built after Pontiac, but is deteriorating badly and seems older. The atmosphere here is very different, as though it is stuck in time somewhere back in the 1960’s. It’s a peculiar feeling. 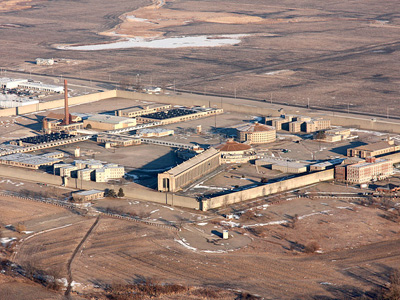 Though I am feeling more at ease than when I first arrived here, I will always remain wary simply because this is Stateville, a facility with a long and infamous history of violence, abuse, and death. Stateville was once the crown jewel in Illinois’ prison system, with the world’s largest cellhouse and the world’s only round cellhouses, home to many of the Chicago gangsters and mobsters of the 1920’s and 1930’s and the street gang leaders and countless gang members of the 80’s and 90’s. This is the place where John Wayne Gacy and many others were executed (I currently live in the old Death House, “X-unit.”). Stateville has also been used in many Hollywood movies. It is a place that should be demolished and the earth bulldozed so that no trace of it remains. It is a place people come to and, very often, never leave alive. I believe you’ll have a firsthand understanding when you come and see this place for yourself.

Venerable Thubten Chodron: I went to Stateville to give R.L. the bodhisattva vows in July, 2004. It took ten phone calls to two chaplains and faxing my papers twice to arrange the visit.

The second chaplain was a jewel in this horrendous prison system. He made sure the chapel was quiet for the ceremony and even turned on the air-con prior to my arrival so that we could sit in this room with no windows. He smiled at people—not only staff but the inmates as well—and when I asked him about his upbeat attitude in an environment than normally makes staff and residents alike depressed and tough, he responded that he refused to let the environment affect him adversely. Bottom line was he saw everyone as human beings worthy of respect.

He said I was the first Buddhist clergy to enter the prison and asked if I would be willing to begin a group. Living far away, I couldn’t accept, as much as I would have liked to.

The feeling at Stateville was tough. As we walked to the chapel, we passed cages in the corridor with human beings inside. My instinct is to smile at people, and I do this in all prison visits, but this time I wondered if a smile to human beings in cages was appropriate. Would they accept it as the gesture of friendliness it was, or would they be angry, thinking I was scorning them in their humiliating situation? I had no way of knowing.

Giving the bodhisattva vows to an aspiring bodhisattva in these conditions felt like a direct snub to cyclic existence. It was swimming upstream with confidence and hope. It was a proclamation to the invincibility of human goodness. I admire R.L.’s attitude and am grateful to have been requested to encourage it.

Explore and be brave
Wayward