You are here: Home > Practical Buddhism > Prison Dharma > By Incarcerated People > On Compassion > Sharing
By K. J. on Jun 18, 2011 in On Compassion

I’ve made some changes and have been vegetarian for a whole month now. 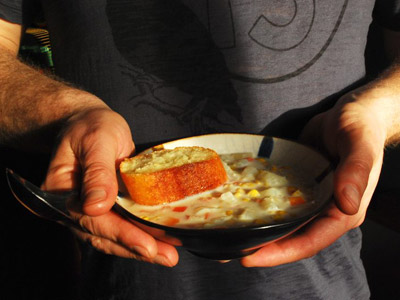 “Thanks, that was the nicest thing anyone has ever done for me in the last 5 years.” (Photo by Heather Joan)

I’m still in the “Hole” or isolation. The other night I heard a guard telling the new guy on the row, who is also vegetarian, that no vegetarian meals were left and he would have to either go hungry or eat meat.

This guy decided to pass on the meat. So without thinking much about it, I got together the soup, crackers, etc. left on my tray and passed them down—hand to hand via prisoners in the intervening cells—to this man with a note that said “Don’t worry about who these came from; I was just concerned you were hungry.”

A few days passed and this man figured out who had sent him the soup. He sent back a note saying, “Thanks, that was the nicest thing anyone has ever done for me in the last 5 years.”

I would have never even thought about helping this man several years ago, but now I see how important it is to pay attention and help one another.