On May 2, 2011, Robert, one of the men Inside Dharma had been working with, was charged with first degree murder and armed criminal action. Robert lived in Hopeville, a homeless tent city in St. Louis, and allegedly got into a fight with another resident of Hopeville. Our community was shocked when we heard the news. 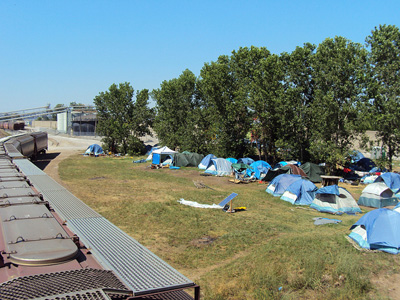 Robert had been doing great—he made it through a very cold and wet winter living in a tent and had started taking some great photographs of Hopeville and his surroundings with a camera that Carol, one of our members, gave him. The photos were so good that Carol had arranged four art shows for him in the coming months. It seemed as though things were finally looking up for Robert.

Suddenly his life was changed, the victim’s life was over, and the City of St. Louis now plans to close this camp and two other nearby homeless camps. They say that the police had been called to this camp about 90 times in the last year. So, soon the lives of all the residents of these three camps will be changed.

When I heard the news I could have cried. My mind started with the “what ifs” and “if onlys.” I was angry with the city for wanting to close the camps because of this issue. Yet I understood that if conditions were right, it might have been me or a friend in Robert’s place or in the victim’s place.

I started thinking about all the things that came together in Robert’s life, in his parents and grandparents, that led to this particular point in history. I thought of the victim’s life and everything that led to its end. I reflected on the circumstances of all the people of Hopeville, all of us who are concerned about them, and those angry people who feel these people are “getting what they deserve.” What exactly brought us all to this point?

It’s like a rock was tossed in the water generations ago, and the waves are still having effects. There are many waves—not just one or two per person but hundreds and thousands per person. They make us who are at any particular moment. This rock that just now fell into the water with a huge splash—how many generations will this wave touch? Will someone not be born because a homeless person loses their home (tent) and freezes to death?

Or perhaps there will be good effects. Perhaps the move will cause one or two people to reach out and find a better solution. We really don’t know, do we?

I’m always surprised that in prisons more fights break out in the yard in the spring than any other times of year. I think, “Wow it’s beautiful outside. Why would you want to fight now?” But perhaps it’s the frustration of it being so beautiful and being stuck in such an ugly place that causes the anger.

We’ve all heard that freedom truly comes from within. Yet we continue to seek it on the outside. “If only” or “if only not.” Our emotions ride this train of suffering. I went there immediately upon hearing the news—“Oh not Robert,” I cried inside.

Yet, this moment is just what this moment is. We cannot see the past or the future. We don’t know where this is going and all the things that will happen in the future due to it. It just is, and we just deal with this right now. It’s hard to have no judgments. It’s hard to make someone bad and another good. Yet this is really me—my waves for the future and waves from the past and judgments, emotions, and so forth. What I do this very moment can bring either peace or suffering. Can I live up to it?

A Native American offender once told me in his native tongue “Don’t fall off your horse.” What a great Zen expression. Can I stay on mine?

Sharing
How spirituality changed my life