You may wan to read J. H.’s essay My tiger first, and then return to this piece.

Lately I have thought a lot about my anger—not the anger I have now, because I have not felt real anger in some time, but the anger I used to feel. It occurred to me that my problem has never been anger. Not that I didn’t manifest it as anger, but I was mostly angry about being afraid. Fear has always been my big problem. I realized this as I started to remember more of my childhood (here lately things have just been coming back to me, things that I had long forgotten). I realized I have been afraid my whole life, and would get so angry about that. I just didn’t want to be afraid any more. Now even my fear of breaking my bodhisattva vows if someone hit me is due to my anger, and that anger is based on fear. I am constantly afraid. I have been afraid all my life! So when I said that I worry about someone hitting me and me responding by hitting him back in anger—that wasn’t exactly the problem. I’m still worried that I would hit them back, but now I understand that the real worry is that they would make me feel afraid and then I would hurt them.

Let me give you a vivid example of this. If it wasn’t for fear, I would not be in prison right now. The guy who died in my case threatened me, threatened my life. At least that’s how I felt at the time. Knowing now what I do about my fear, I wonder if I exaggerated the danger. Regardless, fear is what motivated me. At least that’s what started me moving. Then, I was angry about being afraid. In the end I hurt him because I was afraid, because of my fear. 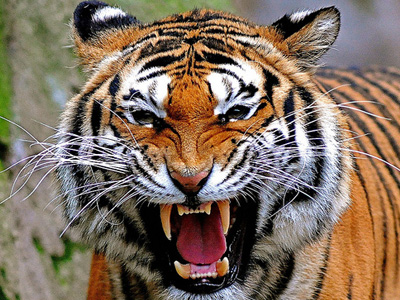 I worry that if my tiger pounces, I will react out of fear and doing that has never turned out well. (Photo by Claudio Gennari)

So now I have to laugh a bit. I realize that what I am really saying is that I am afraid of my fear! The absurdity of that! Absurd or not, that is still the way I feel. I am worried that if my
tiger pounces, I will react out of fear and doing that has never turned out well in the past.

The question arises: Where does the fear come from? That’s a tricky one. I don’t know how to explain that simply, but I’ll try. Used to be, when I was a child, the fear was of being hurt.

Then I went through a stage in life where I liked pain. It was my way of empowering myself, taking over the thing I feared. Then I became a violent person, because I felt fearless, empowered, and high on drugs of course.

Then, after coming to prison, I developed a new fear. My biggest fear is not of pain, or even death. My biggest fear is of being pushed into that fight-or-flight mentality Western psychology speaks of. Why? Because I have hurt too many people when in that mental state. I almost killed my brother once because of that. Just being pushed into that animal fear has always pushed me past the point of logic and into violence. Now I am more afraid of that than anything. Even now, when I think about the tiger, I’m not really afraid of him hurting me, even though he probably could. I’m worried about him hurting me to the point that I stop thinking logically.

I guess that still doesn’t answer where it comes from. Bottom line, I have hurt enough people that I know I am capable of doing so. I also know what my trigger point for that is. So my fear comes from having hurt others and never wanting to do it again. The fear from my childhood and in my teens is a different fear. I know where that comes from, but it would take a long letter just to explain that.

Because I am afraid that I will freeze up if my tiger should attack and not be able to respond with compassion, I have been practicing tonglen (taking and giving) with him as my subject. That way I hope to condition my mind that if this should ever happen, I will already have the seeds of a compassionate response. At least, that’s what I pray.

Lately I’ve been listening to a tape of the “Chod” practice. As I do this, I sometimes contemplate fear and how it will one day keep me from really practicing such things as Chod with sincerity and how it will prevent me from authentically living as a bodhisattva. Even now, my fear hinders my ability to act with compassion and that bothers me.

Case in point. Not a week ago, a celly was made to pay some money to another guy as a sort of protection fee. Now, as a bodhisattva in training, I should have offered more protection than I did, though I did as much diplomacy as I could. Fear stopped me from stepping up and saying, “You will not do this!” What happens if it’s ever a life-and-death issue? Will fear keep me from giving my life to protect another’s? Of course it will if I don’t work on it.