Allow me to share a valuable lesson I learned recently. I went to the showers one evening and hung my shorts, towel, and undershorts on the hook outside the shower stall. Upon exiting the shower, I found much to my surprise and chagrin that the shorts were missing. My favorite and very best pair of nylon shorts! My initial surprise soon gave way to disbelief, “I can’t believe someone had the nads to steal them right from under my nose!!” Then I really began to examine deeply this problem and how I was reacting to it. There was a still-small voice in the back of my mind saying, “You should be outraged, plain pissed-off. They’ve got a lot of f%*%!! nerve!” 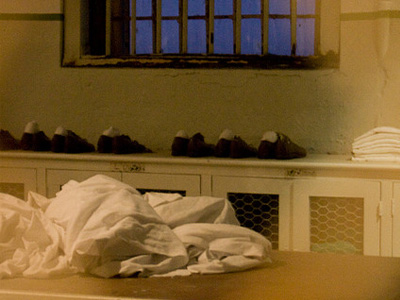 Our possessions are empty of inherent existence, so there’s no reason to feel attached to them. (Photo by Caitlin Childs)

But, you know what, Venerable Chodron? This little voice was so wimpy and lacked conviction that I had to laugh at myself and the situation. I asked myself, “Whose shorts were they really? Who assembled these shorts and transported them here? Who gave me the money to purchase them? (my parents) And besides, just who is this “I,” “me,” or “mine” that possessed these shorts in the first place? This “I” is empty of inherent existence as are the shorts. How silly!

I’m happy to say that I did not become angry, or if I did, a little, I didn’t attach to that anger, which was more like a feeling of frustration than outrage. In fact, I even said a prayer of compassion for the person who stole them, knowing that that person is going to reap the karmic consequences of his act. Besides, this person is suffering from greed, which is probably what compelled him to take the shorts in the first place.

There is one thing worth mentioning in regard to this lesson. It really struck me how, in the materialistic culture we live in, we are conditioned and programmed to respond in specific ways to certain situations or problems. When someone steals something from us, we are supposed to be outraged, angry, and even seek revenge and restitution. How crazy is that? I believe you said in your tape that we should recondition ourselves and the way we view things. Well, this was one of those times. I’m heartened to say that it really wasn’t that difficult to do. I’m glad that I did not react impulsively with anger and violence as I probably would have in the past. In the sub-culture of a prison environment, it’s almost required to lash out under such circumstances. Some people get beaten or stabbed for far less. It’s really a bunch of macho bullshit and I won’t allow myself to be dragged into it.

Later: Shortly after my shorts were stolen, a Muslim friend of mine heard of my plight and gave me a nice pair of nylon shorts. At first I declined, but he insisted, so I accepted and was grateful.