The motivation for doing retreat

The motivation for doing retreat

I wanted to talk some more about motivation for doing retreat because that’s the key thing is your motivation. It’s not how well you visualize and how many mantra you say. It’s what your motivation for doing it is. Because whatever our motivation is, if we create merit, that and whatever we dedicate it for, that’s how it’s going to ripen. So if we start out: “I’m doing retreat because I just need some time to relax. And maybe I’ll have some whammo-kazzamo experiences, I can tell my friends about them. And how wonderful retreat is, and meditation is, and how I’m really on the way to becoming very highly realized because there was Manjushri and Yamantaka lining up to see me. Lining up for me to have a vision of them ….” You know?

If we’re meditating with the thought of the happiness of this life—for status, prestige, for making a name, for having a good story to tell all of our friends—then we might as well be doing anything else out in the world, because that’s basically the motivation that most people operate on, is how can I have my happiness now and be rich and famous and loved and everything else. So there’s no real reason to practice Dharma for that. There are lots of ways to have good stories to tell your friends about how fantastic you are without having to sit in pretzel position four or five times a day.

It sounds funny when I talk like this. But you watch. There’s so much thought about the happiness of this life that creeps into our motivation.

The first level of actual Dharma motivation is when we’re motivated seeking to have a good rebirth. In other words, when our mind isn’t involved with the eight worldly concerns—the happiness of ONLY this life isn’t involved. There may be a little bit of happiness of this life, but our motivation is primarily a good rebirth. That’s the differentiating line between a worldly activity—with the eight worldly concerns—and a Dharma activity that’s looking beyond the happiness of this life. So at least to start out with that.

Now some people stay, “But that’s still selfish. It’s my future rebirth.” Well, that’s true. It is selfish. But some of these people then go on to say, “Well, it’s so selfish I just think it’s ridiculous to think about future lives.” And then they go into this hazy state of, “Well, I’m not sure why I’m doing things then. I want to become a Buddha, but what does becoming a Buddha mean if there isn’t rebirth?” How do you explain what buddhahood is? So at least to have that motivation, looking beyond this life.

But then, even we get a good rebirth, still we’re stuck within cyclic existence, going up and down and up and down on the merry-go-round, getting born again and again according to our karma. And so if we want to get out of that entire mess then having the motivation to seek liberation, to seek nirvana. To stop the rebirth that’s caused by ignorance and polluted karma. That’s the next level of good motivation.

But even that one’s not sufficient because it’s still about me. So that person at the beginning who questioned, “Oh, well, future rebirth’s still selfish.” Yes, they’re on to something there. But that doesn’t mean you should throw out a motivation seeking a good rebirth, because that is the beginning. And then liberation is the next one.

Then to go beyond liberation, to really get rid of that whole selfish thing thinking, “My liberation. I want to get out of cyclic existence because I’m fed up. But everybody’s on their own here, so good luck everybody. Ciao.” Not to have that kind of attitude that we’re just dismissing the situation and the plights of other living beings, because they’ve been kind to us, and because they’re exactly like us. And so therefore having the motivation seeking full awakening so we can be of the greatest benefit to sentient beings.

Try to do your best each and every day of the retreat to generate that motivation. I really encourage people first thing in the morning to think: “Today I’m not going to harm anybody. Today I’m going to benefit others as much as I can, even if it means coming to the meditation session on time. [sigh] That’s so problematic for me. But out of compassion I’m going to make it to all the sessions on time so I don’t disturb anybody else. So I want to benefit others. And then I want to attain full awakening, as my long-term goal, so that I can be most capable of being of greatest benefit to living beings.” And so cultivating that motivation when you first wake up every morning, before each meditation session.

And not just repeating the words, but thinking about the lamrim. You can think about any kind of lamrim topic, and at the end the conclusion always becomes: “Therefore I have to become a Buddha to benefit sentient beings.” Doesn’t matter which topic you start out with, you always lead yourself in cultivating your motivation to come to that same conclusion.

If you motivate that way, and at the end of the session you dedicate for that, then indeed your virtue will ripen in full awakening. But if we motivate and dedicate for worldly activities—fame and gain—we may or may not get them. If we motivate for future life or for liberation and dedicate for that, yes that will come about. We may more strongly have a feeling for one of the lower motivations, but to always remind ourselves, “Okay, that’s okay, but it’s insufficient.” So even if bodhicitta feels a little bit fabricated, still you cultivate it. You fabricate it. Don’t worry about fabricating something like bodhicitta. It’s certainly better than not fabricating it and letting the mind of afflictions run wild.

They have this expression: “Fake it until you make it.” So it’s the same idea. You have fabricated bodhicitta, but by planting the seeds in your mind again and again, and really following the reason why it’s important to attain full awakening, then slowly our mind begins to change, and those things make sense to us and we begin to feel them in our heart. So there’s no other way besides doing these things repetitively.

Leading oneself in lamrim meditation

Tomorrow and the next day when we do the different rites that put you into retreat, I won’t lead a long motivation. That’s what I’ve been doing yesterday and today at the Bodhisattva’s Breakfast Corner. So I’m kind of counting on you to be continually working on your motivation as much as you can. Especially, as we talked yesterday, seeing the rarity of this kind of experience. And the opportunity you have to really progress on the path. Then to really have that kind of joyous effort to go about your sessions and your study and so on.

Question: For those doing the self-generation practice,1 how do we hold a sense of divine pride and work with our afflictions at the same time?

Venerable Thubten Chodron: Divine pride. I prefer the translation “divine dignity.” Or some people say “divine identity.” Already using the word “pride” can be confusing for us because there’s an affliction called pride. So it’s more you feel the divine dignity of being the deity. The way that works, and the way it will help you with the afflictions, is …. Let’s say you’re sitting there saying the mantra then you got distracted. You thought about something that happened, something someone said to you, they offended you, they insulted you. The Look. They gave you The Look. You know? Or they gave you The Sneer. Or whatever it was. And you’re getting angry. Then the way divine dignity helps with that is you say, “Okay, I’m Manjushri.” Or, “I’m Yamantaka.” Or whoever it is. And how is Manjushri going to respond if somebody gives him The Look or sneers at him or makes fun of him or insults him? I’m sure that happens to Manjushri.

[In response to audience] But if you’re Manjushri how are you going to be sitting there dumping on yourself, “Oh I’m so stupid.” Manjushri doesn’t think like that.

[In response to audience] But you have divine dignity, “I am Yamantaka.” Yamantaka doesn’t worry about people doing this and saying that and all that kind of petty stuff. Because Yamantaka realizes that stuff is there and gone in the next moment. It’s impermanent. It’s only the thought of some sentient being who has an afflicted mind anyway. Yamantaka doesn’t take all this stuff personally. It’s like, “Oh, somebody’s insulting me, that means that he’s suffering. The insult has nothing to do with me.”

[In response to audience] Yes, you say that to yourself. “I’m Yamantaka.” Yamantaka doesn’t have bad self-esteem. Yamantaka doesn’t sit there and go, “Oh gee, my fangs aren’t as sharp as some other people’s fangs. My red-yellow hair is just, it’s in curls and it needs to be straight flaming hair. And my fire isn’t hot enough. Oh I’m a total disaster.” Yamantaka doesn’t go into trashing himself. So if you have that divine dignity, when those old videos come up of self-criticism, you press the pause button. You press the STOP button. Because all that stuff is rubbish. And Yamantaka doesn’t adhere to rubbish. It all gets burned up. His hair burns it up. His flames around him burn it up. Okay?

[In response to audience] She’s talking about in the red [Pearl of Wisdom, Book II] book for aspiring bodhicitta there are certain actions you do and certain actions you avoid, and how helpful really doing them are, continuously creating merit. And being truthful in your speech. And really working to benefit sentient beings. And if you try and follow those guidelines they really help your mind a lot.

Again, if you have bodhicitta you can’t get into all this self-deprecation “I’m worthless” kind of thing. I mean, do you think Chenrezig sits around and goes “Aye aye …. I have 11 heads. Ugh. What happened to me?” You know? “Everybody else has one head, I have 11. And they’re all different colors. Ugh. What do people think of me?” I don’t think Chenrezig has that problem.

Or Chenrezig sits there and thinks, “I cherish myself more than others, I’m not going to give any of my heads away, they’re all mine.” [laughter] So try and think like a deity thinks. That’s what it means. 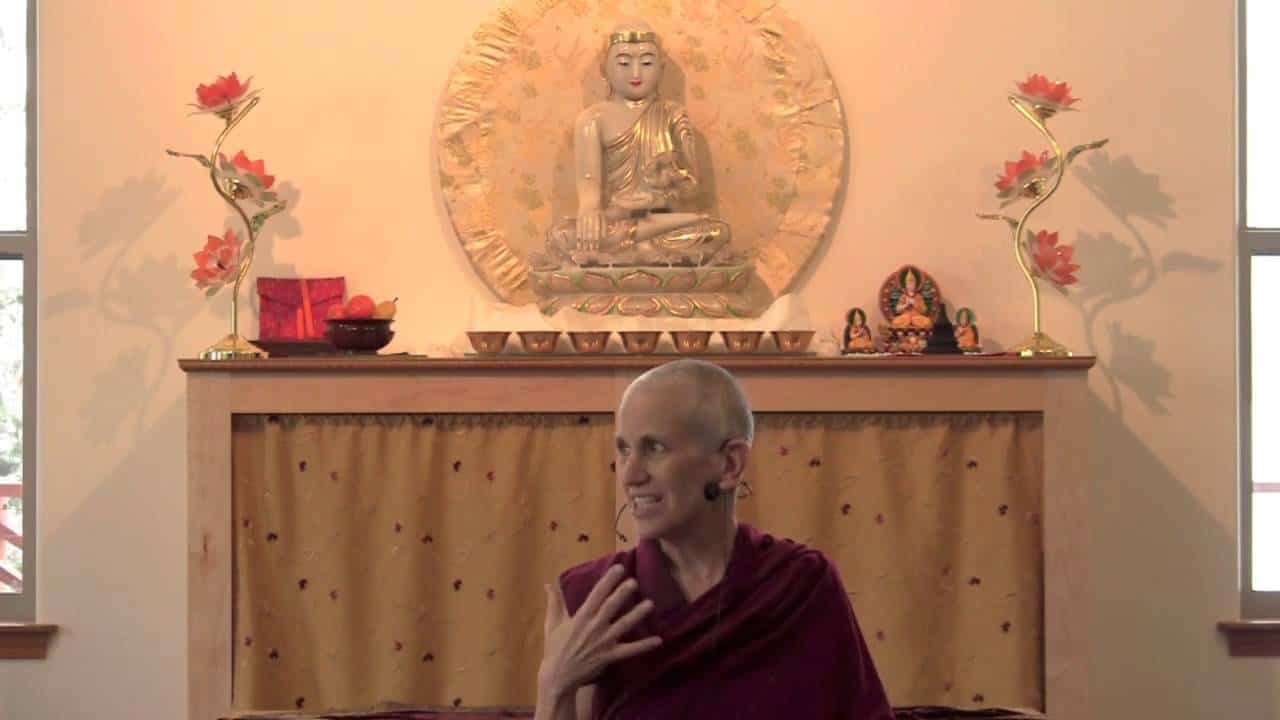 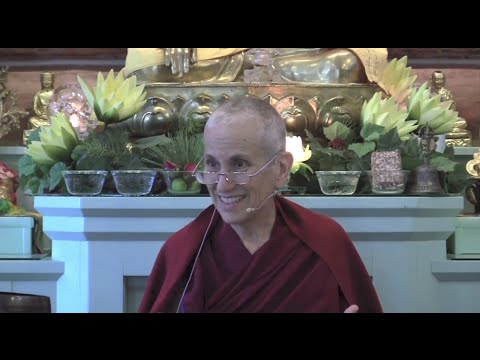