You are here: Home > Practical Buddhism > Prison Dharma > By Incarcerated People > On Attachment > Circus
By J. S. B. on Jun 18, 2011 in On Attachment

I’m a bit anxious and pensive. It’s normal, I suppose, to feel this way when you’re due to be released from prison in three weeks. It’s only been four years, so it’s not like I’ll experience a major cultural shock. I know guys here who have been in for decades; they’ve never seen the Internet or used ATM. They’ve never been to Starbucks! No, I won’t have it so bad. I’ll have to start up a blog and figure out which 20,000 songs to put on my Zune 80, but I’ll adjust.

As I sit here at my prison job (I don’t make license plates, I’m an office clerk) watching CNN, I do wonder exactly what I’m being released into. Apparently, there are now Taser parties, much like Tupperware parties, where women can purchase tasers in assorted colors. When asked if the Internet adequately satisfied their need for a meaningful relationship, 31% of single people answered yes. 31%! 24% of married people said yes. An elementary school girl was suspended from school for hugging. O. J. Simpson will soon provide Court TV with a much-needed celebrity trial—again. One of the most popular attractions currently on the Internet is a video of a guy pureeing an iPhone in a blender. What’s going on out there? It’s all so crazy! 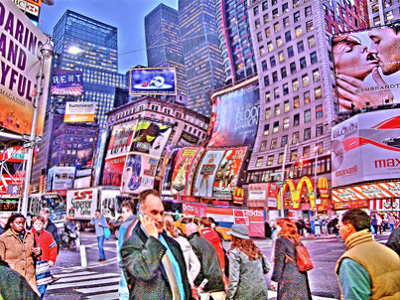 The world seems completely mired in minutia. (Photo by Felix)

The world seems completely mired in minutia—sex, technology, celebrities, bling, scandals, more sex, more bling, and more technology. And it’s all available 24/7 on CNN or the Internet. How did this happen? Who’s to blame?

Christians blame Satan. Conspiracy-theorists blame the government or maybe aliens; not the illegal ones, but the ones from space—neocons would blame the illegal ones. Oliver Stone would place the blame squarely on LBJ and the CIA. But, none of them are the culprits. No, we have no one to blame but ourselves. We’re the guilty ones.

If the Buddha had a blog—go to [hit the space bar ten times].org—he’d lay it all out there: how we cloud our pure, clear minds with a very demanding self. How we create a dualistic existence—there’s our self and everything else. Desire, anger, and aversion result and we scuttle around trying to soothe these afflictive emotions. We avoid pain and seek pleasure. We distract ourselves with stuff and fluff because we’re basically unhappy and haven’t a clue as to how to be happy. We focus on celebrities, gadgets, glitter, MySpace—anything to numb the pain. There’s a flatter flat-screen TV I just gotta have. I really need celebrity birthdays downloaded to my cell phone every morning. Oh no, Lindsay Lohan just spent 84 minutes in jail, I gotta see the picture of her in a jail-issued orange jumpsuit. Obama isn’t wearing a ‘flag’ lapel pin—what’s with that? I gotta have Hannah Montana tickets! If I post a video on YouTube of me singing “Feelings,” hundreds of thousands of people will view it and I’ll feel famous, desired and complete.

Sure, technology and the Internet are wonderful things that can truly enhance our world; materials goods do provide us comfort. We must be wary of crossing that line where these enhancements and comforts become excesses, distracting us from the true path to happiness. On the sidebar of the Buddha’s blog, in the big bright letters, it’d say “To find the path to happiness click here!” (The Buddha’s ad men would probably put flashing dollar signs and a picture of Angelina Jolie there just to get your attention.) Clicking here, we’d learn that true happiness results from helping others overcome their suffering. We must look beyond ourselves and connect with others—help them. That’s how we find happiness.

Our techno-, celebrity-focused culture is very shallow and self-centered. Technology has indeed created a world village, but individually, one-to-one, we seem to be drifting further apart as we sit in front of our laptops, talking on our cell phones. I’ve always liked the concept of engaged Buddhism—not just sitting on your cushion meditating on compassion, but actually getting out there and getting your hands dirty helping others. We all need to be more engaged with one another.

In a recent letter, my Buddhist pen pal cautioned me not to be caught up “in the circus of media, responsibilities, social doings, plans… everything.” Coming to prison is like going on retreat—you’re taken out of the circus (actually, you’re thrust into an entirely different circus), and suddenly you see just how ridiculous and shallow modern life can be. Hopefully, the lessons learned in this state-sponsored hermitage will continue to resonate when I’m once again “out there.” I believe I have developed a level of mindfulness which will aid in avoiding the three rings of the circus that is samsara. Daily, I perform a practice on Chenrezig, the Buddha of Compassion, which has helped me to begin to dissolve my self-centeredness and develop compassion. I will stay engaged by helping others overcome suffering. I plan on helping ex-offenders reintegrate into their communities and continue their spiritual journey.

So, though it seems bizarre and insane out there, I’m ready to venture out. I certainly don’t want to stay here. I’ll recall what the Buddha said about the middle way and avoiding the extremes of attachment and aversion. I won’t become distracted by Britney and K Fed’s adventures. I’ll refuse to update to the latest version of Windows every six months. No reality TV for me. No YouTube or iPhone. I’m not going to run off and join the circus.