There are two levels in the development of bodhicitta—the mind dedicated to attaining awakening for the benefit of all sentient beings. These are the aspiring and engaging bodhicitta. A person with the aspiring bodhicitta wants to attain awakening for the benefit of all sentient beings, but he or she is not yet prepared to engage in all the practices necessary to do so. A person who has generated the engaging bodhicitta joyfully engages in the bodhisattva’s six far-reaching practices by taking the bodhisattva precepts. The difference between aspiring and engaging bodhicitta is similar to the difference between wanting to go to Dharamsala and actually getting onto the transport and traveling there. 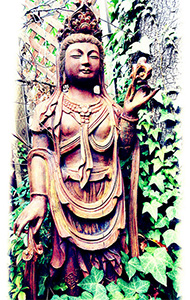 Precepts are not burdens to bear but are ornaments to be worn joyfully. (Photo by Wonderlane)

The bodhisattva precepts are taken on the basis of having taken refuge in the Three Jewels and some or all of the five lay precepts. Buddha prescribed the precepts in order to protect us from doing actions that bring unhappy results and to help us attain awakening quickly and easily. Therefore, precepts are not burdens to bear but are ornaments to be worn joyfully.

The eight precepts of aspiring bodhicitta

After generating aspiring bodhicitta before the guru and the Three Jewels, you should observe eight precepts in order to protect your bodhicitta from degenerating in this and future lives.

How to protect your bodhicitta from degenerating in this life:

How to prevent being separated from bodhicitta in future lives:

The four remaining precepts are explained in two complementary sets of four. These are:

When a precept has more than one aspect, doing just one aspect constitutes a transgression of the precept.

Four binding factors must be present to completely transgress sixteen of the root precepts. The transgression of two precepts, numbers 9 and 18, requires only the act itself. These four are:

To keep yourself from experiencing the results of transgressing the precepts, purify by means of the four opponent powers. Prostrations to the 35 Buddhas and the Vajrasattva meditation are excellent methods to purify transgressions. If your bodhisattva ordination has been damaged by completely breaking a root precept, purify and then retake the precepts before a spiritual master or before the objects of refuge—the Buddhas and bodhisattvas—that you have visualized.

To eliminate obstacles to the far-reaching practice of ethical discipline, abandon:

To eliminate obstacles to the far-reaching practice of fortitude, abandon:

To eliminate obstacles to the far-reaching practice of joyous effort, abandon:

To eliminate obstacles to the far-reaching practice of meditative stabilization, abandon:

To eliminate obstacles to the far-reaching practice of wisdom, abandon:

To eliminate obstacles to the morality of benefiting others, abandon: