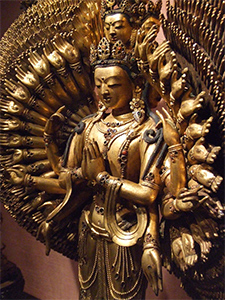 At that time also Superior Avalokiteshvara, the bodhisattva, the great being, was looking perfectly at the practice of the profound perfection of wisdom, perfectly looking at the emptiness of inherent existence of the five aggregates also.

Then, through the power of Buddha, Venerable Shariputra said to Superior Avalokiteshvara, the bodhisattva, the great being, "How should a child of the lineage train who wishes to engage in the practice of the profound perfection of wisdom?"

Thus he spoke, and Superior Avalokiteshvara, the bodhisattva, the great being, replied to Venerable Shariputra as follows:

"Shariputra, whatever son or daughter of the lineage wishes to engage in the practice of the profound perfection of wisdom should look perfectly like this: subsequently looking perfectly and correctly at the emptiness of inherent existence of the five aggregates also."

"Shariputra, like this all phenomena are merely empty, having no characteristics. They are not produced and do not cease. They have no defilement and no separation from defilement. They have no decrease and no increase."

"Therefore, Shariputra, in emptiness there is no form, no feeling, no discrimination, no compositional factors, no consciousness. There is no eye, no ear, no nose, no tongue, no body, no mind; no form, no sound, no smell, no taste, no tactile object, no phenomenon. There is no eye element and so forth up to no mind element and also up to no element of mental consciousness. There is no ignorance and no exhaustion of ignorance, and so forth up to no ageing and death and no exhaustion of ageing and death. Likewise, there is no suffering, origin, cessation or path; no exalted wisdom, no attainment and also no non-attainment."

"Therefore Shariputra, because there is no attainment, bodhisattvas rely on and abide in the perfection of wisdom; their minds have no obstructions and no fear. Passing utterly beyond perversity, they attain the final state beyond sorrow. Also, all the Buddhas who perfectly reside in the three times, relying upon the perfection of wisdom, become manifest and complete Buddhas in the state of unsurpassed, perfect and complete awakening."

"Shariputra, a bodhisattva, a great being, should train in the profound perfection of wisdom like this."

Then the Blessed One arose from that concentration and said to Superior Avalokiteshvara, the bodhisattva, the great being, that he had spoken well. "Good, good, O child of the lineage. It is like that. Since it is like that, just as you have revealed, the profound perfection of wisdom should be practiced in that way, and the tathagatas will also rejoice."

When the Blessed One had said this, Venerable Shariputra, Superior Avalokiteshvara, the bodhisattva, the great being, and that entire assembly of disciples as well as the worldly beings—gods, humans, demi-gods and spirits—were delighted and highly praised what had been spoken by the Blessed One.

Homage to Shakyamuni Buddha
Review: Bodhicitta and the afflictions