The International Full Ordination Program in Bodhgaya, India, February 14-23, 1998, was organized by Master Hsing Yun and Fo Guang Shan Temple in Taiwan. It drew 146 participants (132 of them women). 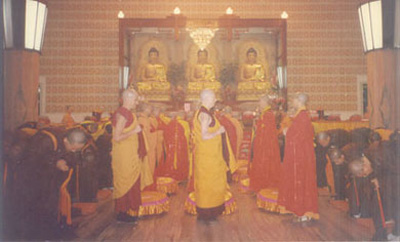 Bhikshunis-to-be paying respect to their preceptors. Venerable Thubten Chodron is standing on the left. In front of her is Ven. Karma Lekshe Tsomo.

Second, the ordination program was truly international, with people from 22 countries. Four of the new bhikshus were from the Congo and are now studying Dharma in Taiwan. There were about 18 new Western bhikshunis, 20 Sri Lankans, 28 from Maharastra (India), and about 8 Nepalese, as well as many others. The bhikshuni lineage had spread from Sri Lanka to China in the 5th century, and died out in Sri Lanka in the 11th century due to the ravages of war. Now it went back from the Chinese to the Sri Lankans. As I witnessed the Sri Lankans taking the bhikshuni vow, I wondered if they were the incarnations of those previous Chinese bhikshunis and if the Chinese giving the vow were the incarnations of the Sri Lankan bhikshunis or vice versa? Or, as someone pointed out to me, perhaps all of them have already become enlightened and this was a whole new batch!

Also significant was that about nine well-respected Sri Lankan bhikshus participated in the ordination. Until now there has been strong resistance in the Theravada tradition to re-introducing the bhikshuni lineage, so their approval and participation was a major step. In addition, a Burmese monk and Thai monk—both from traditions that also are resistant to introducing the bhikshuni ordination—took part in giving the ordination. One Tibetan monk was among those giving the ordination and His Holiness the Dalai Lama had sent a representative to observe the procedure. However, the absence of Tibetan nuns taking the ordination was sadly noticed: only two Tibetan nuns were there, all the others of the Tibetan tradition being from the West or from Ladakh. However, two Western bhikshunis from the Tibetan traditions—Ven. Karma Lekshe Tsomo and myself—had been invited to be witnessing acharyas among the bhikshunis who gave the vow.

The Maharastra nuns were ex-untouchables who converted to Buddhism since the 1950s. Most were poor and under-educated. They follow the Theravada tradition, and their teacher, a monk also from Maharastra, brought them to Bodhgaya for the ordination. They ranged in age from 20 to 80. The 20-year-old is now studying Dharma in Taiwan and has lots of potential. I met her mother, who was very supportive of her daughter’s ordination. Initially the organizers were not going to allow the older women, who were all novices already, to ordain. In Taiwan ordination of the elderly is discouraged because they don’t want people joining the monastery simply to have a place to live and others to care for them in their old age. But during the individual interview that each candidate did, the 80-year-old nun said she’d kill herself if they refused her. Needless to say, the master changed his mind! Everyone admired her determination. Although some of the other older nuns had trouble physically with the discipline, the 80-year-old bowed and kneeled with everyone else, even though she had to use a cane to walk. She inspired everyone!

The Nepali nuns, who are also Theravada, faced resistance from the Nepal monks, but one who is supportive accompanied them here and participated in the ordination, and that, too was a big step. They were young and eager to learn and practice. 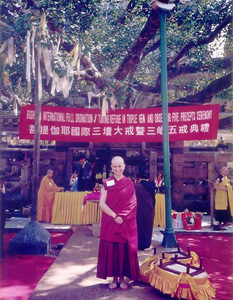 Venerable Thubten Chodron is one of the 12-member bhikshuni sangha giving the ordination.

For me it was a humbling privilege to be part of the 12-member bhikshuni sangha giving the ordination. As we walked into the hall, with the big drum beating and the large bell ringing, I thought, "If I were to die suddenly, now, while giving the ordination, I would be happy with my life." The longer I’m ordained, the more precious ordination is, the more I value the kindness of those who preserved it through the centuries, and the more I pray to be able to keep it purely, inspire others to receive and keep it, and pass it on to others. Practicing in a temple with other monastics brings a very special energy—a feeling of purity and noble aspiration—that I haven’t experienced elsewhere.

The new moon day after the program ended, the eight bhikshunis who remained in Bodhgaya met at the stupa to do sojong, our bi-monthly confession and purification ceremony. We requested to use the room on the second floor inside the stupa and there we did the ceremony by candlelight. As far as I know, this was only the second time since at least the 11th century that sojong had been done by bhikshunis in Bodhgaya, the first time being at the first Sakyadhita meeting in 1987. All of us felt a special joy as we concluded the ceremony—a special joy that comes from being a monastic. 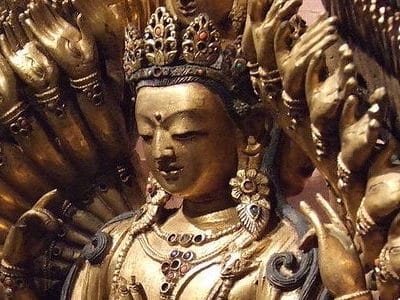 The Heart of Wisdom Sutra