We’re still talking about ordinary beings being ignorant. Ignorance is like a type of phenomenon. So how do we make decisions if our consciousnesses are mistaken?

Based on those kinds of consciousnesses, we can look at conventional things and make good decisions. Those are good decisions in life. Our problem is that we have a very hard time telling the difference between those consciousnesses and when our mind is actually grasping at true existence and an affliction has arisen. When our grasping gets triggered, it just kind of comes up: attachment comes, jealousy comes, arrogance comes, anger comes, resentment comes—it all comes. We aren’t even aware that those are false minds; that even those afflictions are misapprehending their object. They’re grasping the object in the wrong way.

For example, when we’re angry, not only is there the grasping at true existence underlying that, but also we’re holding the object to be inherently awful and evil. At that time we’re not even recognizing that we’re holding the object that way. We’re just thinking, “I’m right.” When attachment comes, we’re holding the object to be inherently beautiful and desirable. We don’t realize that we’re projecting desirability and attraction to it and it isn’t there. Instead we think, “Wow, this is fantastic. I want it.” This is where our problem comes in and why we have a hard time making good decisions. It’s because we can’t tell when the afflictions arise. That’s also because we can’t tell when the grasping at true existence arises.

What we really need to work on is just identifying the afflictions. And then, seeing how those are erroneous minds because the object that they are holding does not exist as it appears, even on a conventional level, basic level.

This is such a good experiment to do. I was told about one person in the Spokane meditation group. The group talked about brownies and how we look at them as if, “This is inherently delicious and I want some.” So one of the women in their group went around to many bakeries in Spokane tasting all the chocolate brownies, to see if any of them tasted as good as she thought that they would. Because when we have attachment, we project a delicious taste onto the brownies that isn’t there from its own side. So she did the taste test. She didn’t invite us to go with her, but she did arrive at the right conclusion: that none of the brownies tasted as good as she thought they were going to.

Right there you see the erroneousness of our way of perceiving things. When our mind is in a steady state, it doesn’t see the things that it sees when we’re attached. And that’s why so often we will make different decisions and do certain things based on attachment and anger. Later on, when our mind is in a different state, we look back and we go, “Why did I say that? Why did I do that? What in the world was I thinking?” Ever had that happen? Well, that’s why. It’s so important to identify the afflictions and learn the antidotes to them so we can calm our mind down. And when our mind is free of afflictions, then make decisions. 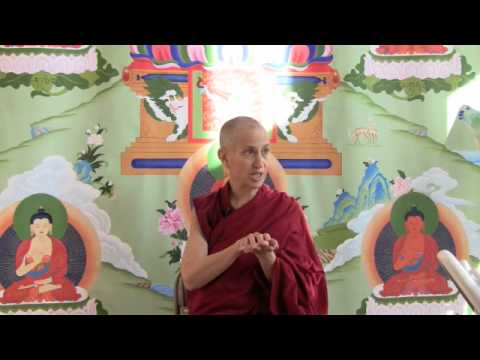 Working on our attachments