In the wake of Hurricane Katrina

In the wake of Hurricane Katrina

On September 1, 2005, Venerable Thubten Chodron received the following two emails within five minutes of each other. They galvanized her to write something in the hope that it would benefit others, and encourage readers to extend compassion to those directly suffering from and distressed by witnessing the devastation of Hurricane Katrina, one of the deadliest hurricanes in American history that took place in August 2005.

Would you consider posting on the website some advice for those having difficulty dealing with the aftermath of Hurricane Katrina? Perhaps others would visit your site looking not for soothing words, but practical ways to deal with these emotions.

I think there may be others, like myself, who are having difficulty after watching the disturbing news reports of death, anarchy, and horrendous suffering and problems of victims. Many of us feel helplessness, grief, as well as anger and frustration that relief efforts are not meeting the basic needs of victims. We feel a heaviness throughout the day thinking about the scale of the suffering.

I’m horrified about the people—black people, no coincidence—who are being left to die of starvation, thirst and disease in New Orleans. I can’t think of what to do, other than perhaps write to newspapers around the country saying I think it’s a shame on our nation and on our president in particular. I would go to New Orleans myself if I thought there were something I could do (and if I had the money to get there). Any suggestions?

The scenes of the hurricane’s aftermath are horrific, and I, too, find it appalling that minorities and the poor are those who suffer the most even in a natural disaster. This is an excellent reminder of the nature of cyclic existence and thus the importance of generating the determination to be free.

Our ordinary minds don’t think that things like this can happen. Somehow we hold the idea that cyclic existence is pleasant and suffering shouldn’t happen. As much as we talk about karma, in the moment when suffering occurs we forget that it is caused by our own harmful actions; we forget that our lives are under the influence of mental afflictions and karma. So by witnessing the suffering of those in the South, let us become disillusioned with cyclic existence and seek liberation instead. By seeing their suffering, let us overcome our complacency and generate bodhicitta —the aspiration for full enlightenment so we can benefit others most effectively.

Our first instinct may be to mourn and get angry that relief efforts aren’t reaching the victims in a timely manner. But we know that anger doesn’t make food and clean water get to the victims any quicker. I suggest turning it around and rejoicing that so many people are working together on relief efforts. The city and state governments are up against huge obstacles because the communication systems were destroyed and there is no electricity. But they keep on doing their best, even though it may be imperfect. But cyclic existence is imperfect by nature.

In times like this we see more clearly that not everyone in society is treated equally. Where does bias come from? The human mind, specifically from attachment and anger, holding some people dear and others distant. To free ourselves of our bias we meditate on the four immeasurables so that we can do away with bias and prejudice:

It’s important for us to help those who suffer due to the hurricane in whatever way we can, be that making a cash donation to a charity, going to the stricken areas now or in the upcoming months and years to help, or reaching out to those around us whom we are able to help directly. For example, today we at the Abbey donated food to our local food bank—even though we can’t get it to Louisiana, we were delighted to help those nearby.

Through Dharma practice we can help indirectly. For example, do the taking and giving meditation. Or become Chenrezig and radiate light to those whose lives are in turmoil and uncertainty due to the hurricane. Our minds are powerful and such prayers and aspirations have a force in the world. They’re also a way for us to keep our hearts open to others and to maintain a hopeful and compassionate attitude. 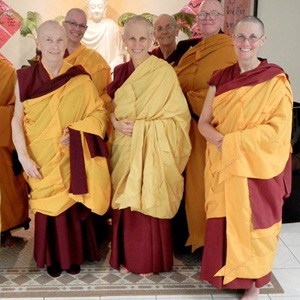 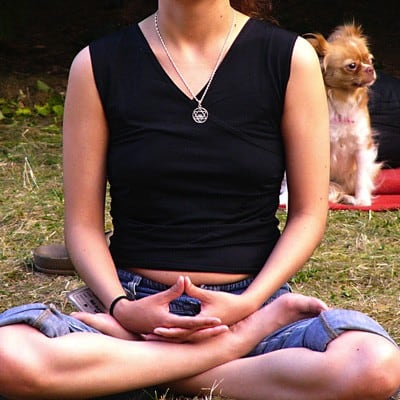