Today was a little eventful. Or at least there was a slight change in my monotonous daily routine. This morning I went to work. I work in the gym/recreational building and take care of cleaning the guitars. I grabbed a guitar and went to sit on the bleachers. Before I started playing anything, I noticed that the hallway leading in to the gym was crowded with people, and that there were several prison guards telling them to go outside because the gym wasn’t open yet. 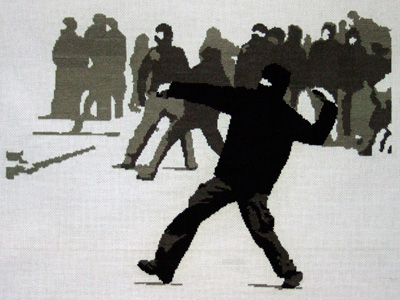 It was strange to watch because that is the first time I’ve seen prisoners stick together in here. (Photo by Cross-stitch ninja)

This wasn’t surprising; it is an everyday occurrence. The incarcerated people in the hallway are yard maintenance workers, which means they have to pick up trash in the prison yard and sweep and shovel the sidewalks clear. It’s a really cruel job here in Missouri winters, because the prisons don’t give them warm clothes. We are issued uniforms that are half the thickness of blue jeans, a duck coat that is paper thin and has no hood (I have a quilted flannel shirt that is twice as warm), a toboggan hat, and boots made out of one thin layer of cheap leather half as thick as cardboard. I’m fortunate enough to have family members who send me money every now and then, so I am able to buy some personal clothes, but for the guys who don’t have anyone on the outside to send them money—about half of the prison population—all they have to wear is the clothes the state issues them.

Anyway, the prison officials try to make these guys go out and work in this extremely cold weather without providing them with warm clothing. Normally what happens is that after being chased out of the hallway, the workers stand around outside for 10 or 15 minutes until the gym opens and then sneak in here. But today it was so cold that when the guards told them to clear the hallway and go outside, only half of them left. That’s when I kind of got interested because there were about eight guards yelling at about 100 imprisoned people, telling them to clear the hall. And there were about five imprisoned people in the crowd yelling—with their backs turned so the guards couldn’t see who they were—all kinds of nice things at the guards. Basically, they were saying, “We ain’t going nowhere.”

Finally, after 30 minutes of this, the guards took ten incarcerated people to solitary confinement for inciting a riot and let all the rest of them go into the gym. Later on that afternoon the staff changed the policy so that the yard workers only have to work one day a week instead of five.

It was strange to watch because that is the first time I’ve seen incarcerated people stick together in here. It’s normally dog eat dog. If they only realized the power that a community can have.

Friendliness
The creator of happiness and suffering