You are here: Home > Practical Buddhism > Prison Dharma > By Incarcerated People > On Compassion > Joshua
By J. T. on Jun 18, 2011 in On Compassion

Written in my great grandmother’s handwriting, these words appear on the back of an old picture of me and my brother.

I was two weeks old, and he was four years old. We are sitting together on the living room floor with a blanket spread out beneath us. He seems unaware of the camera as he devotes his attention to me. I lay across his lap with my head cradled in the bend of his elbow. His small hand just barely cups the side of my face. I’m sure the intended focus of the picture was me, but despite the allure of my oddly shaped head and the slobber of milk in the corner of my mouth, the charm belongs to Josh. 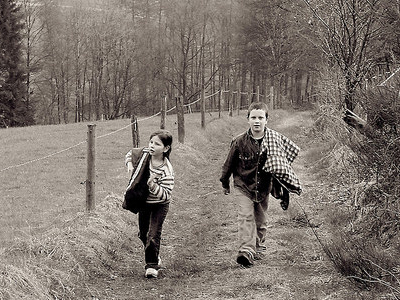 Josh said, “I’m telling you that I love you.” (Photo by Werner Wittersheim)

Although his long, soft eyelashes hide his eyes, the tenderness in his gaze is apparent. His smile radiates wonder. Josh’s expression proves Lila’s statement to be true.

The camera captured an important moment in my life. Captured was the moment my brother first told me he loved me.

When we were young, we lived on Rocket Street in Longview. Our interaction was like most siblings our age. I desperately wanted to play with him and his friends, and he would do anything to get rid of me. I used to ride my tricycle down the hill in front of our house with them in hopes of being included. Their dirt bikes soared over me as I struggled to push my bike back up the steep hill. I was a dreadful pain unless I was needed; like the time I was suckered into rescuing Luke Skywalker from the toilet.

There were occasions when he enjoyed tormenting me. He made me believe heads who had discussed eating me were hidden in my aunt’s closet. He trapped me in elevators, jumped up and down during the ride and told me the cables would snap, sending us to our deaths. I began to think he really didn’t like me as he often reminded me.

One particular incident changed my mind.

I remember I was four when my mother pulled the cake out of the refrigerator and set it on the kitchen counter. “J., do not touch this cake. It’s for the baby shower today. Do you understand?”

“Yes, Momma,” I answered sheepishly. I watched her go into the living room, saying something about finding her purse. The cake was within reach.

Ever so lightly, I broke a tiny piece of icing from the corner. The pure delight of sugar and doing what I had been told not to do satisfied me immensely. Innocently, I went to my room.

About an hour later, my mother leaned into the doorway. “Did you touch the cake?” I felt ashamed. I knew it was wrong to lie, so I soberly said, “Yes.”

I don’t recall her ever moving faster than she did in that moment. She jerked me up and spanked my tail. I began to holler and cry—not so much from the pain as from her fury. I wondered if that piece of icing warranted such a harsh reaction. Had she not recognized my honesty?

Josh appeared at the door and asked what was wrong. She abruptly left and we followed her into the kitchen. She picked up the cake and set it on the table. “Your sister touched this when I asked her not to. Look at this mess!”

The beautiful decorations on top were smeared beyond repair. Two large trenches cut deep into the cake where someone’s greedy fingers had stolen scoops of icing. Josh looked into my swollen tearful eyes. “Momma,” he said, “I did that!”

We all stood there in silence for what felt like days. My mother finally spoke. “J., why did you tell me you touched the cake?” “Because I did!”, I said as I pointed to the place where my finger had been. Squinting, she inspected the corner of the cake where a tiny flake of icing was missing. She hugged me tightly. “I’m so sorry, Honey”

I didn’t feel better, though. Something inside of me told me I could never trust her with the truth again. I wouldn’t grow into a liar, I would simply keep the truth to myself. I would grow in silence. I don’t remember what punishment Josh received, if any, but I no longer doubted that he cared about me.

My family moved to Kilgore when I turned five. Our new home was located in the country and was surrounded by pastures. We had few neighbors so Josh and I depended on each other for company. By the time we became teenagers, he was my closest friend.

High school was difficult for us. We didn’t seem to fit in. His lack of interest in sports and my interest in them were considered backwards in social circles. When no one else understood us, we understood each other.

When Josh became interested in photography, I was enlisted to be his subject. Dressed in funky clothes, I would strike artistic poses. I once begged him to let me take pictures of him while he showed the camera anguish and other fashionable expressions. As he did, I zoomed in on his ear and wasted an entire roll of film on shots of his ear. I thought it was funny, but he wasn’t amused when the pictures were developed. He wouldn’t let me take any more pictures.

He also got involved with abstract painting. No one saw what I saw when I looked into his paintings. Where others saw random strokes of color, I saw his mind. As colors swirled on the canvass, I felt his emotions reaching from beyond those oil paints quietly asking, “Who will understand my sadness?”

He began dating when he got his driver’s license. I don’t know what he saw in Kelly. She was obnoxious and treated Josh like dirt. I would hear him on the phone with her arguing and pleading with her about some trivial matter. She said to me once, “Your brother gave me the ugliest painting. I told him it was a piece of crap.”

She was involved with our church and attended youth camp even though Josh was unable to. Kelly spent the whole time with a guy from another church. They kissed and touched right in front of me and Jesus. I couldn’t tell Josh. I knew I had to keep the truth to myself.

When we returned home, Josh was waiting with my dad in the church parking lot. As dad and I put my luggage in the car, I watched Josh get something from his own car and meet Kelly at the door of the church van. My brother held a little bouquet of flowers in his hand.

“What is that?” she asked sarcastically. “I don’t want those cheap grocery store flowers.”

They broke up not long after that. Several months later, Kelly approached me at school and gave me a letter as fat as a dictionary to give to Josh. At home that evening, I tore the letter up and threw it away. The next day, I told her that he had thrown her letter away without reading it. She never bothered him again.

He moved out when he was 18 and had a baby with a girl who would eventually become his ex-wife. I missed him. In the middle of the night, I would sit alone in front of the computer where we had spent many hours laughing and talking. I was slipping into a personal despair that would soon overwhelm me. I was empty. I would close my eyes and see those colors moving, asking me over and over, “Who will understand my sadness?”

I remember the day I was sentenced to prison. My family stoically sat around a long oak table and stared at their hands. I was numb and hollow inside as I had been for months. The door opened and my brother walked in. He fell to his knees beside my chair. Sobbing, he wrapped his arms around me. I brushed his hair back with my hand. His tears soaked through my dress. Suddenly the emptiness in my heart eased its stranglehold. The freeing of my heart startled me.

My dad must have mistaken my reaction for discomfort at seeing Josh upset, so he pulled him away form me. “No,” I thought. “Let him be. Let him cry for us both.” I took his face into my hands as he cried. I couldn’t make out his words when he tried to speak. I asked him, “What is it you’re saying?”

Josh said, “I’m telling you that I love you.”