A student wrote asking whether it was advisable to euthanize his dog.

My dog Mollo, who has been a good companion and whom I love a lot, is very ill. It is so difficult to see him suffer with convulsions. It seems to me that the most compassionate thing to do in this circumstance is to euthanize him and put him out of his suffering. What do you recommend?

Death is a natural process that we all go through. I know how hard it is to watch someone you love suffer. You want to do everything you can to stop the suffering, and it’s frustrating and sad not to be able to do so. Call forth your courage and compassion and do the taking and giving meditation for him and everyone in his shoes.

In making the decision whether to euthanize a pet, we have to consider what is most beneficial in the long term. Both you and Mollo want his suffering to end, but death ends only this misery of this life. Another rebirth will follow. Unless you have the clairvoyant powers to know where Mollo will be reborn and what he will experience in his next life, you can’t be sure that you aren’t sending him to a life with more misery than the convulsions he is experiencing now. 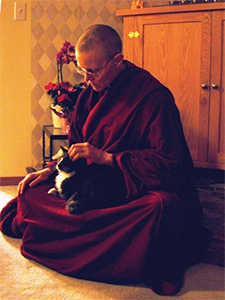 We can use the time there is before our pet’s natural death to put good karmic imprints in their mindstream; this is very beneficial for them.

I recommend you allow Mollo to die naturally. Use whatever time there is before his natural death to put good karmic imprints in his mindstream; that will definitely help him in many future lives. It will establish a connection between him and the Three Jewels, so that he will meet the teachings and have an affinity for them in his future lives.

As much contact Mollo has with the Dharma now, that much more benefit he will experience. So read Dharma books or short texts or prayers out loud to him, e.g., the Heart Sutra, The Three Principal Aspects of the Path, The Foundation of All Good Qualities, etc. Say lots of mantra so he hears it. The vibration of the mantra will ease his suffering—and yours too. Tell him often to take a precious human life, meet a qualified Mahayana spiritual mentor, practice well, generate bodhicitta and wisdom, and quickly become a Buddha. Visualize the Buddha or Chenrezig on his crown, with light flowing from the Buddha into him, purifying all his negative karma, easing his misery, and filling him with the love, compassion, and wisdom of the enlightened ones.

Our cat Achala just died a natural death after being old and ill a long time. He heard so many prayers, mantras, and Dharma texts read aloud to him before he died. We were all glad to be with him and offer him love and gentle care as he gradually wasted away and then as his mind separated from his body in the last hours of his life. I’m sure hearing so many mantras, teachings, and recitations of texts helped him as he was dying, and having so many good imprints on his mind will benefit him a lot in future lives.

In addition, by letting Mollo die naturally, you avoid creating the destructive karma of killing and so does the vet. This destructive karma would bring so many unpleasant results in future lives and obscures the mind from gaining Dharma realizations. Instead you create the karma of protecting life.

On this website, there’s a section on dying that has other suggestions that may be of help. Both Mollo and you are in our prayers.

Thank you for taking the time to write and for your kindness. I am doing as you advised.

Ven Chodron has shared your experience with your dog Mollo with us and we have made prayers for his quiet passing as well as prayers for you at this time of sadness and difficulty. I am relieved that you followed Venerable’s advice on not having Mollo euthanized.

I’d like to share with you some of the things I have come to understand a little bit more clearly about animal friends dying that have helped me deepen my practice:

Even though Achala lived his entire life surrounded by the Dharma in a very conducive environment, his ability to practice was non-existent due to his karma of being born as a cat. This is something I have had to look at since I have very romantic notions about the animal realm. This is a lower rebirth due to negative karma ripening no matter how cute, smart, loyal or funny they may be.

Prayers, mantra recitations and visualizing the Buddhas and bodhisattvas pouring the light of their loving compassion and wisdom on him were a very powerful practice. It very much calmed him down right up to the very end. Animals are very sensitive to our energies and mind states. So keeping our hearts soft and open was crucial. We wanted him to feel our love and care, not worry or disturbances.

Achala became my daily meditation object on the emptiness of inherent existence of Achala. Who is he anyway? What am I attached to? There is no solid, independent Achala there and I would meditate on this daily to try and loosen my conception of him. It made it easier to let him go.

So you have a precious opportunity to give Mollo lots of love and good wishes to send his mindstream off in a Dharma way. It’s very important to be with your sadness and your struggle. That belongs to you and can bear great fruit in your practice. And Mollo is doing what he needs to do. Try and support him with your deep heart connection and gratitude for knowing him and use that connection as your anchor. Be a compassionate witness to that for his benefit.

Wishing you peace and courage as this time,
Semkye

Mollo died at first light this solstice morning. An auspicious and loving, though physically difficult, ending to our time together. Thanks so much for all your compassion for us both.

If there is any guidance regarding how long to leave an animal’s body undisturbed, I’d appreciate it being shared with me.

You did a wonderful job caring for Mollo. I know it was difficult to witness, but in the long term it was better for Mollo, the vet, and you. Now wish Mollo well and send him off with love as he goes on to the next life.

We will continue our prayers for Mollo and for you. Until the body starts to smell, do not touch or move it. Continue to say mantras and read Dharma passages out loud for a while so he can hear. Then do some of the other things you need to do in your life, and later come back and recite some more. After a while (but before the body starts to smell), touch the crown of his head and tug at a little bit of fur there. That helps his consciousness leave from the crown. Tell him to take a precious human life or to be born in the pure land, cultivate compassion and bodhicitta for all sentient beings, practice Dharma well, and quickly become enlightened. When the body starts to smell, the consciousness has left and you can bury the body.