A presentation given at The International Conference on the Life, Thought, and Legacy of Tsongkhapa in Mundgod, Karnataka, India.

I want to talk a little bit about what Je Tsongkhapa contributed that will specifically help Westerners and non-Tibetans in their practice. That’s the world I deal with mostly, teaching in the West, and also in Taiwan and Southeast Asia. So how Je Rinpoche’s teachings really can help.

One thing that I really appreciate is that through Je Rinpoche’s life, he showed that he studied, and then he also practiced. In his practice he started with the preliminaries, so this sends a strong message to Westerners who want to skip the preliminaries, skip the four noble truths, and go right to tantra, because that’s the highest practice. Je Rinpoche shows right off the bat that that’s not how he did it, and that we should have our feet on the ground and be very practical.

I also appreciate his non-sectarian approach. He went around and learned from everybody. We have a kind of non-sectarianism in the West, which is we talk about being non-sectarian, but don’t go to those other centers. Je Rinpoche’s life really show the importance of being quite open.

Especially in terms of compassion, which is what I want to emphasize, his teachings really help Westerners understand a lot of things about compassion that are ordinarily misunderstood. For example, in the West, there’s a notion that if you’re compassionate, you have to be suffering—that’s the model in Christian society with Jesus on the cross. If you feel any happiness at all you’re being selfish. That’s not the Buddhist approach, especially the first bhumi bodhisattva is called the Joyous One. They’re happy. A bodhisattva should be happy. If you’re miserable, what are you doing in your practice? This really shows the importance of being happy, and at the same time compassionate. If we read in scriptures that bodhisattvas can endure the suffering of others, it doesn’t mean that they fall into personal distress and they’re just miserable and feel, “Oh, I can’t bear this suffering, it’s terrible.” But rather they can’t bear that others suffer, so they don’t turn the focus of suffering to oneself, of “I can’t bear to suffer,” but others’ suffering is unbearable. So again that corrects a misunderstanding that Westerners often have about compassion.

There’s also the notion in the West that if you’re really compassionate you are a pushover. I don’t know how you translate pushover in Tibetan. Or doormat—doormat is easier. If you’re really compassionate, then everyone takes advantage of you, they walk all over you. You can’t stick up for yourself because you’re so compassionate. Again, that’s not what Je Rinpoche teaches or what he shows through his life, that actually being a bodhisattva requires incredible self-confidence. His Holiness is always speaking about that, and it requires incredible strength. So much so that if you’re compassionate, you have to risk other people getting mad at you because you’re trying to do what’s beneficial for them, but they don’t like it. You’ve got to have that willingness to risk your reputation, and so on, in order to do what you know in your heart is good for other people.

Another notion in the West about being compassionate, is that it’s got to always be for everybody or other people, nothing for yourself. In Buddhism, we talk about the bodhisattva path where you’re trying to accomplish the purpose of yourself and the purpose of others. This is a really new idea in the West, that you’re allowed as a bodhisattva to do something good for yourself instead of always sacrificing.

There’s also a notion in the West that compassion is very easy and it’s kind of a baby practice. You know, renunciation, that’s for babies. Compassion is for babies. Wisdom, we got that mastered. We want tantra! Again, by showing that compassion—this came up one of the other days—it requires consistent and repeated meditation again, and again, and again to really transform our minds. It’s important to know that the three principal aspects of the path are not baby practices. They’re not things that you just do, get out of the way, and then because we are sophisticated people, we go on to tantra. You know, the three principal aspects of the path are so rich, and not so easy when we really look at our mind and try to change the mind. Quite difficult, actually. Especially compassion—His Holiness says it’s easy to understand compassion and bodhicitta, but to actually generate them, very difficult.

Now I’m going to talk about something else that is related to compassion, and that is ethical conduct, and the importance of ethical conduct if we’re going to generate compassion. I was sorry that there wasn’t an entire panel here on ethical conduct or on Vinaya because I think that is one of Je Rinpoche’s foremost contributions to Buddhism in Tibet, and it’s really something that needs again to be rejuvenated and refined in our day and age. I again mentioned, I give talks a lot in East Asia and in America, and I must say that in East Asia and Southeast Asia, Tibetan Buddhism doesn’t have the greatest reputation, unfortunately. It is known as tantra and people’s image is that the practitioners of tantra, they drink and they have sex. Many lamas go there and they give many initiations, they don’t always teach, but ring bells, play drums, and so on. People begin to think that Tibetan Buddhism isn’t really a form of Buddhism, that people don’t know the Dharma properly.

Also if I must say, sometimes the conduct of some of the monastics who go there, especially the monks, leads to a lot of people slandering Tibetan Buddhism and even slandering His Holiness because the monks are not keeping their precept to avoid sexual contact. I hate to have to speak about that, but it’s an important thing, and it really needs to be corrected. All of us are responsible for upholding Je Rinpoche’s legacy, whether we are ordained or whether we are laypeople, whether we are scholars or practitioners. We all have to uphold his legacy and pass it down to future generations, and to do that ethical conduct is so important, especially on the part of monastics.

The sexual behavior is one point that is difficult, the other is money. People going there and asking for donations, supposedly for their monasteries but actually for their own pocket. Or asking people to please—monks asking people to please support their families and then asking for more and more money. It really gives people a bad impression of Tibetan Buddhism. You might say, well, it’s the other Tibetan Buddhist traditions that do this. We’re Je Rinpoche’s followers, we don’t do that. Not true.

I think if we really love Je Rinpoche—and I know for myself, he really saved my life. I was born in a barbaric land, which has gotten more barbaric in the last three years. I was looking for meaning and Je Rinpoche’s teachings were like, okay, here’s the purpose of my life, this is what’s meaningful. These teachings have so much potential to really help the world and help individuals, help societies, but in order to do that, we have to show the example of not only compassion, but also ethical conduct and treating people fairly, treating people properly. This, although unpleasant to bring up, excuse me Lord Buddha, I do because all of us, myself included, need to keep this in mind.

Another misunderstanding about compassion is that compassion leads to burnout. That if you’re really compassionate, you just wear yourself out, and you can’t function. That’s not true. I talked about compassion burnout in one of my books, and Roshi Joan [Halifax] wrote to me and said, actually, if you burn out from compassion, your compassion wasn’t real compassion. That there was some other element in it, because if we really have compassion, it gives you consistent energy. You may get physically tired, and of course we need to rest as Shantideva tells us, but in terms of our mind, if there’s real care for others, then the mind doesn’t burn out. I have a long way to go in that way, I don’t know about you.

I tried to bribe him [the moderator] for some extra time. Okay, I’ll close now.

This talk was revised for print in the RDTS (Re-imagining Doeguling Tibetan Settlement) Magazine. The published article is reproduced here: Learning, Living, and Teaching Bodhicitta. 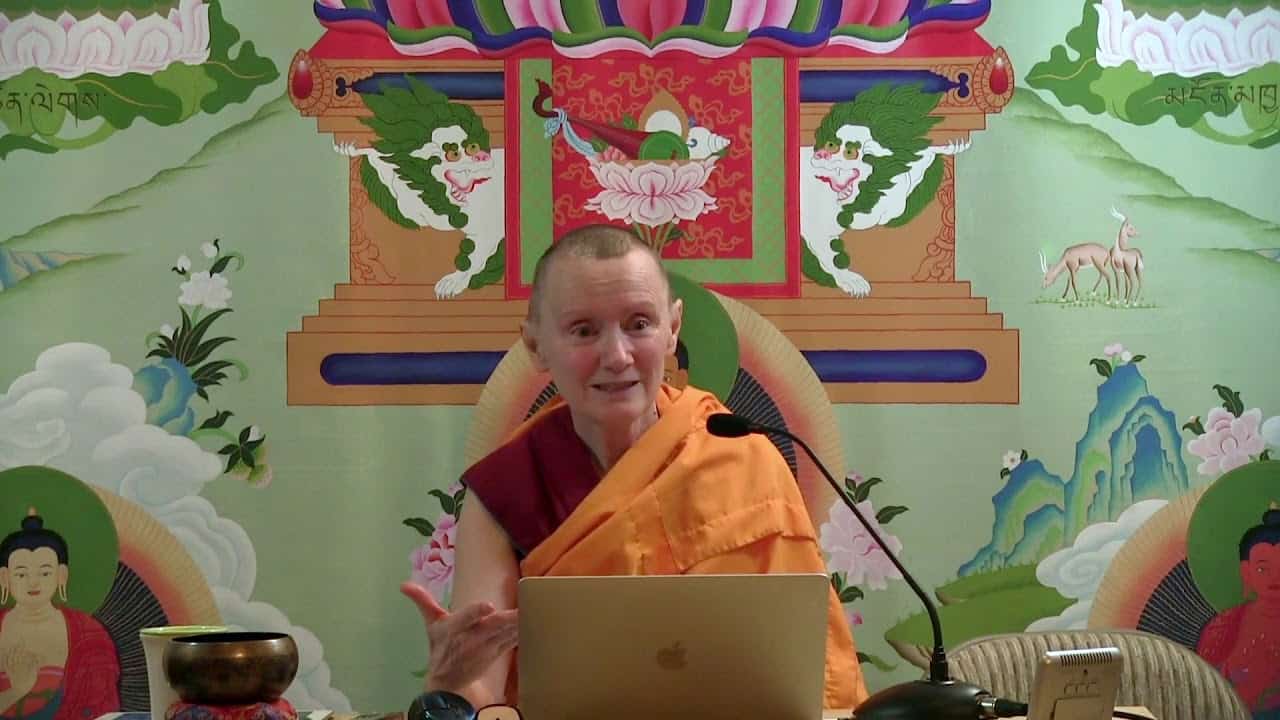 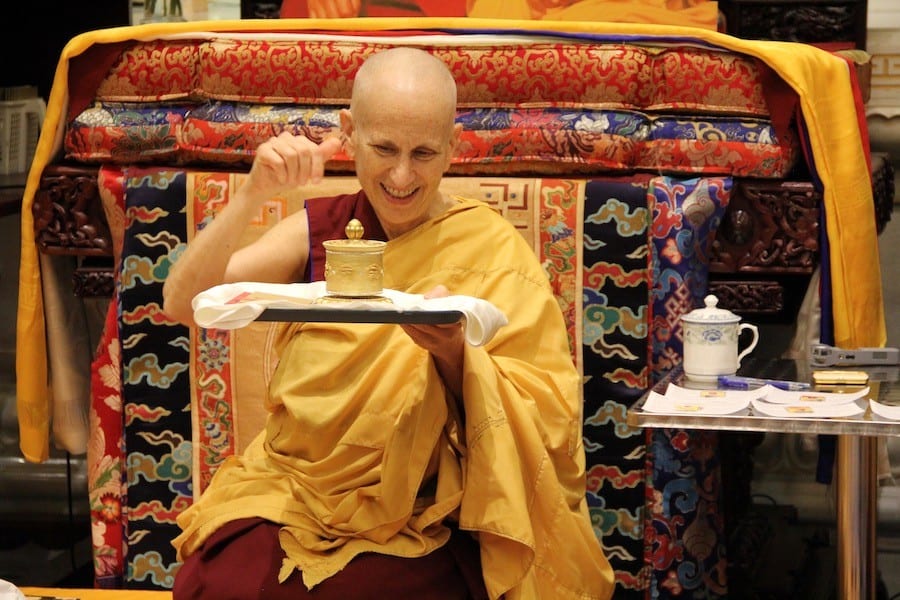 Creating the causes for rebirth in Amitabha’s pure land