The seventh of a series of teachings on the four nonvirtues of speech recorded at the Luminary Temple in Taiwan.

One story I often tell regarding that is I had a friend who had borrowed a car from another friend, and this car, the hood of the car sometimes would fly up so it wasn’t very safe to drive. I was talking to my friend and I said, “Be sure that you chain the hood down, so that you know, nothing happens.”

So one day, he was supposed to meet me somewhere and he didn’t show up. And then half an hour, and then an hour, and he finally came and I said, “What happened?” He said, “Well, I was on the highway and the hood of the car flew up.” And I said, “But you knew it was unsafe! And we already talked about how important it was to chain the hood of the car down! Why didn’t you do that?”

And so I really spoke rather harshly to him but I realized afterwards, what I was trying to say was, “Oh you’re safe and I’m so relieved you weren’t hurt. Because you were late for the appointment and I was scared that something like that would happen, and it would be a lot more serious than it was.” But you know, sometimes when we’re not really in tune with what we’re trying to say and what we’re feeling, then we express it like that, and then it starts an argument. And then it hurts somebody.

Another example I give often happens between two people in a marriage. You’re sitting down for breakfast, and you have noodles a lot for breakfast here. What do you have with noodles here, what do you put on your noodles? Cheese, or butter? Okay, so you’re sitting down for breakfast, husband and wife are sitting down for breakfast, and they have their noodles. And he says to her, “Oh, where’s the butter for the noodles?” And she says, “Oh, we ran out, and it was your turn to do the shopping. What happened, did you forget?” And he says, “No, I didn’t forget to get the butter. It was actually your turn to get the butter.” And she says, “No, it wasn’t my turn, it was your turn. Yeah? And you’re accusing me of doing something that I didn’t do. You’re blaming me for something that I didn’t do, and I don’t like that.” He says, “Why are you so sensitive? You know? It was actually your turn to do the shopping, it wasn’t my turn. And you’re just so sensitive about everything.” And then, you know, she says, “Oh, you’re the pot calling the kettle black, telling me I’m sensitive?” And then he speaks, and then she speaks, and then, it goes on and on. And then one of the them says to the other one, “You know, you’re so passive-aggressive, because you’re blaming me and pretending you’re innocent. And it’s really your passive way of getting your anger out me.” And the other one says, “You know, you’re always telling me that I’m passive-aggressive, and you’re the one who’s passive-aggressive. And actually our marriage has been like this from the very beginning, you’ve never been kind and truthful, you’ve always blamed me for things I didn’t do.” And then this one says, “Yeah, you didn’t, you’re always so incompetent about this.”

And then the whole conclusion is, we want a divorce. And it’s just because the butter wasn’t there. I mean, so many quarrels start out [with] some small thing and then we add on. You know, because we have our whole stockpile of things. Then the quarrel becomes not about the butter but about how we communicate. You blame me for what I didn’t do. You don’t listen. You have the initial argument about the butter. Then you have the other argument about how to communicate with each other. So again, double trouble. And then, because you’ve been calling each other names and insulting each other, then you have all of that that you need to talk through and clean up, you know, because people feel hurt about it.

For example, somebody criticizes us, or blames us for something we didn’t do, and we think, you know, this is the result of my own karma. Sometime in the past, I blamed somebody, I criticized somebody. Actually, I did that just yesterday, and the day before. And I criticize people a lot. So here it is, somebody’s criticizing me, why am I so upset? This is just the result of my own karma. And my own karma’s created under the influence of ignorance and my own self-centered mind, if I don’t like this result of how people are speaking to me in this way, then I shouldn’t create the karmic cause for them to speak with me that way. And then instead of getting angry, instead of blaming anybody else, you make a very strong determination about how you want to act in the future, and you begin to change your own behavior. Okay? So that’s something about the third one, harsh speech. 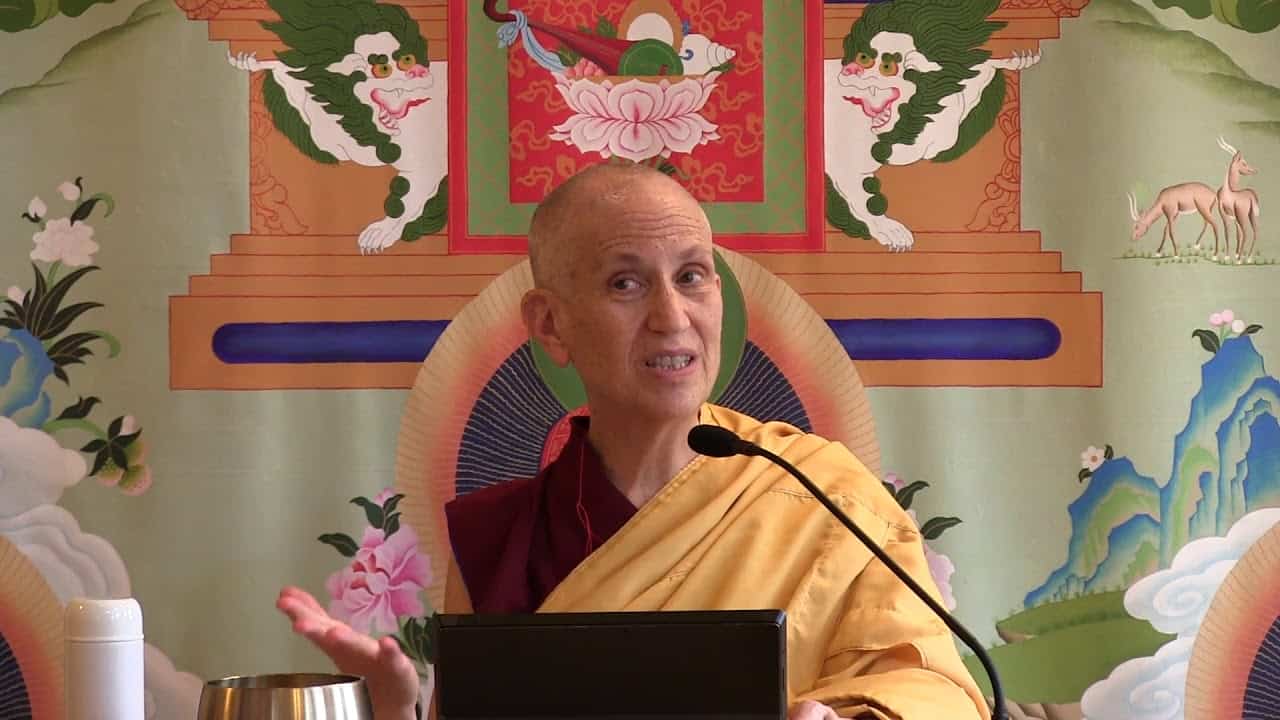 Why monastics matter in the modern world