The second of a series of teachings on the four nonvirtues of speech recorded at the Luminary Temple in Taiwan.

If you need any advice on how to do that, President Bill Clinton can help you. Because this is exactly what he did, okay? So, you know, he messed around with Monica, and then he said, “No, I didn’t do anything.” So I think what was so disturbing to people, was not that he messed around with Monica. Nowadays, that would be really, uh, you know, the US news would shoot him about that, but back then it wasn’t so bad. But what the population was really upset with him about was that he lied. Yeah?

We have to look at the situations where we lie and why we lie and if there’s something that we did before that we don’t want anybody else to know about, rather than lie about it, because people will eventually find out that we’re not telling the truth, eventually they find that out. So rather than lie about it, it’s better to stop and ask ourselves, why did I get involved in that initial action to start with? What was my motivation, what was I looking for, what was I needing, you know? And then do some purification of that initial action. So spiritual purification, you know, by means of the four opponent powers, and also to have the courage to admit that we did that action. Because it takes a lot of courage to admit our negative actions, but it brings a lot of relief. And it’s, if we want to purify, the first of the four opponent powers is regret. So that means actually owning, yes I did that action, and I regret it. So that regret can be very difficult, it can be very embarrassing, we may have a lot of explaining to do because we really acted against our principles, or maybe against promises we made to other people, but it’s much better that we clean up that initial action, rather than try to cover it up by lying. Okay?

Let me give you an example of some of the things people do that they then lie about, that really make problems. I’ve had a number of people come to me, because I hear all sort of stories. When you’re a Buddhist nun you hear so many stories, because people seek advice from you. So many people have told me, that when they were children, they knew their father was having an affair with somebody. But Dad kept it secret from the family, and he thought that nobody in the family knew. But the children are not stupid. So they knew. And then of course if the father’s lying about it, the children lose respect in two ways: first of all, because the father’s cheating, and second of all because he’s lying about it. And this can go for the mother too, if the mother’s cheating in the relationship.

This kind of lying just destroys trust. And I know for myself truth-telling is really the basis of trust in a friendship. If somebody doesn’t tell me the truth, then how I can trust them about anything. Then everything they say is, “Who knows?” Okay? Like our dear president now, you know, who says one thing one day, and another thing the next day, and they contradict each other, and you wind up with, you know, I really can’t trust anything this person says.

Forget about national and international levels: it’s damaging, it’s also on personal levels. And I really feel that when people lie to me, when they don’t tell me the truth, I feel that it’s, I feel rather offended. I don’t get offended very easily, but this offends me, because it’s like somebody’s saying, “I can’t trust you to bear the truth, so I’m going to lie to you.” And it’s like, somebody is assuming that I can’t bear the truth. But wait a minute, I’m an adult, I can bear the truth, I want to hear the truth, don’t lie to me, don’t make that assumption about me. Because if you lie, then, you know, how am I ever going to trust you again? So, better just to tell the truth.

So often I find what people are so hesitant to tell the truth about, sometimes it’s not really big things, but they just kind of lie anyway, and I find that rather puzzling. Like, it used to be before the days of cell phones, one family would have a telephone, somebody would call, and you wouldn’t feel like taking the call, you were busy or something, so you’d say to a family member, tell them I’m not home. Why not just tell the other person, “I’m busy?” Why do we need to lie about it? Other people understand. We’re busy, we can’t take a call right now. You know? They’re not dimwits, they won’t judge us for it. So there are many things like this where people lie when they don’t need to lie.

I remember one time when a friend of mine lied to me, he wanted me to do something and he lied, and when I found out he lied, I said to him, “Why didn’t you just tell me the truth? Because you know what you said didn’t help me at all, didn’t make me more willing to do the favor at all. If you’d told me the truth to start with, I may have been more willing to help.” So it’s so strange sometimes how people lie over things and they’re so afraid people will be offended but other people won’t be offended at all.

In Nagarjuna’s text Ratnavali, Precious Garland, he talks so much about telling the truth. There are many, many times in the text where he talks about the importance of truth telling, over and over, in many different chapters. I really need to count it sometime, how many times he said it. He emphasizes how important that is and I really agree, we don’t need to be afraid of the truth.

The topic of lying also comes up when we talk about aspiring bodhicitta. So when we generate the aspiration to become fully awakened for the benefit of all sentient beings, then one of the guidelines to keep our bodhicitta from degenerating in future lives, is to avoid lying and deceiving our spiritual mentors and Buddhas and bodhisattvas. So deceiving our spiritual mentors is really a big problem, okay, because those are the people whom we’ve chosen to guide us, because we trust them and we want their feedback. So because those are the people who have that special role to guide us spiritually, we need to be really transparent with them and not try and put on a good face, so that we look fantastic. Because if we think, two things, if we succeed in fooling our teacher, we’re only harming ourselves because then our teacher won’t be able to give us the advice that we need. And second of all if we don’t succeed in fooling our teacher and our teacher knows we’re lying, then we’ve really impacted the student-teacher relationship in a negative way.

Because how can this person help us if we don’t tell them the truth? If we’re you know putting on a good face. So lying is often verbal but it can be through our actions too. So sometimes you meet people and when they’re around their teacher, they are so nice. They are polite, they are kind, they are gracious, they speak gently and softly to others, and as soon as they’re not around their teacher, they’re horrible to the other disciples. They’re competitive, they boss them around, they push them around, and then they present the total opposite face when they’re with the teacher, of being so humble and sweet. So how does this benefit us? We might think, well, this makes me look good in front of my teacher, well yeah, so what? Does looking good in front of your teacher get you to full awakening, to Buddhahood? No, it doesn’t. So if our real aim is to become Buddhas, then we have to make our behavior with our teacher and apart from our teacher consistent, and if we have, you know, and not put on this very polite face with our teacher because you know then how are we going to get the advice that we need? So that’s something very important to keep in mind.

One time I asked, I was, asked one of the people at the Abbey, “Did you do this?” And he said, “Yes.” Because I had asked him to do that and he said yes, and I knew he didn’t do it. I just kept walking, and it’s like, mmm, okay, you know, I wonder what’s going on that he’s not telling the truth. And he actually came later and said, “Oh I misspoke.” He didn’t say, “I lied,” you know, “I misspoke. When you asked me I hadn’t actually done what I said what I did but now I’ve done it.” But I knew at the time he was covering up. So this kind of thing, you know, it creates an interference to our spiritual practice. 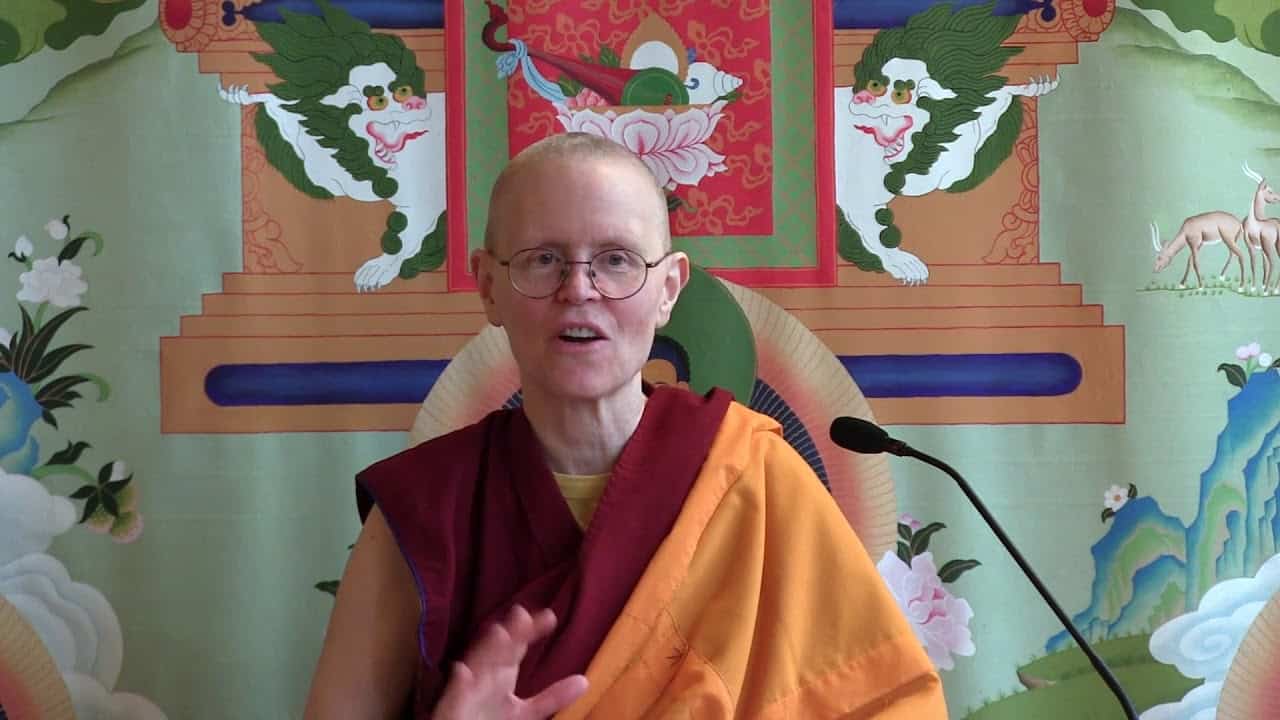 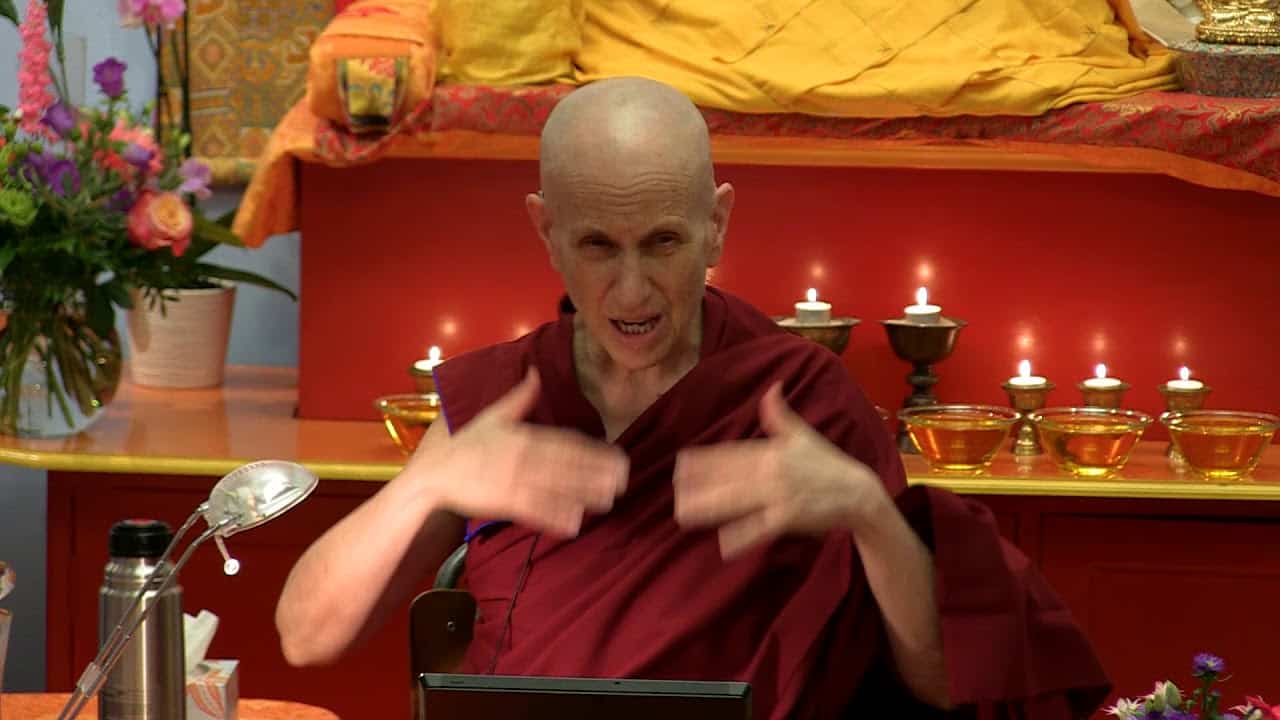