When I was attending medical school many moons ago I was taught a very basic principle. It was called the “keep it simple, stupid” or KISS principle. Apparently the principle originated in the Navy and had to do with designing systems that were simple and, therefore, easier to fix. In medical school it referred to not making things more complicated than they needed to be. In other words, don’t look for zebras when there is a stampede of horses. Basically this meant when a patient came in with some mysterious symptoms, rule out the most common diagnoses first before looking for some rare disease. Over the years, I have tried to practice KISS in my medical practice and also apply this principle to my life in general.

Life often seems quite complicated. But if one can live by a short list of basic principles, things become much simpler. I am thinking of things like living a life of integrity and avoiding hypocrisy, or following the ten commandments, or avoiding the ten nonvirtues in Buddhist teachings.

When I first met the Dharma in 2011 I was experiencing some significant changes in my life. I had recently turned 60 and was starting to wind down a long career in medicine. I was also doing some introspection about what life was all about and what I had achieved during those 60 years. I could find a lot of success in multiple areas of my life but not a lot of happiness. In fact, I wasn’t quite sure what happiness was anyway. I guess the definition varies from person to person. I did, however, have a clear definition of suffering. Stress, anxiety, irritability, frustration and restlessness seemed to be my constant companions.

So, when I first heard the Dharma I immediately thought this was my magic bullet. I had finally found the cure for what ailed me. Instant happiness and freedom from suffering were mine for the taking. I started to voraciously read and listen to as much Dharma as I could get my hands on. As I delved deeper into the teachings I started to realize that the Buddha’s instructions to sentient beings were quite detailed and multi-layered and that there were no simple answers to our human condition. My desire to find the KISS pathway was being thwarted. 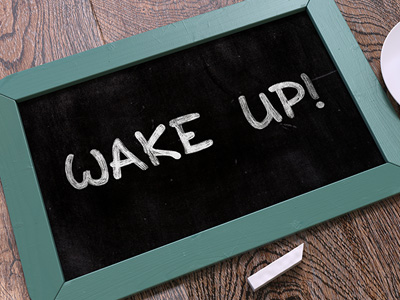 What I needed to do was try to WAKE UP. (Photo ©tashatuvango / Dollar Photo Club)

The other day I was struck by what I could call a mini epiphany, a realization that I was approaching the Dharma in the wrong way. I was looking at my practice as a way to suddenly become happy and free of suffering. I was sitting in meditation in order to reach some future goal. Basically, I was using Buddhism as a self-improvement program.

My motivation to study the Dharma was flawed. Instead what I needed to do was try to WAKE UP. For as long as I was living in ignorance, anger and attachment, it would be impossible to find true and lasting happiness or freedom from suffering. So maybe there is a KISS technique for my Buddhist practice, and it is to constantly remind myself that I am ignorant, foolish and deluded about the nature of reality and especially about the self.

Now, I don’t mean to oversimplify a path that will take many lifetimes to complete. But at least I came to the realization that I don’t need to be a happy person or even an improved person. Rather, what I am seeking is to become an awakened person. So maybe my mantra should now be WAKE UP, STUPID.