Venerable Thubten Chodron: Robbie has been practicing the Dharma since he was a teenager; he’s now in his early twenties. His ability to look honestly at his mind and be transparent about what he is thinking is wonderful. Recently he wrote this letter, reflecting on the resistance to Dharma practice that he’s been feeling. Since most of us have resistance, I thought sharing his reflection would benefit others.

I have been experiencing some real resistance to Dharma practice over the last few months, so I started to reflect on where this resistance was coming from. In the process of doing this, I learned some interesting things about myself. 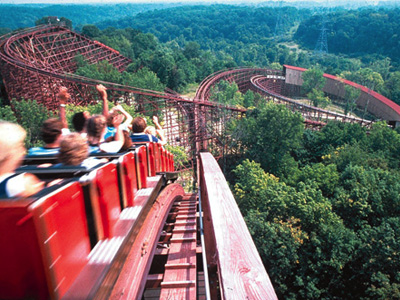 I wanted to ride the roller coaster of samsara but take the Dharma pill only when I was about to get sick! (Photo by Warren County CVB)

First, I think I wanted one foot in samsara and the other in nirvana. I didn’t want to change too much, but just enough. It’s as if I wanted to use Dharma to be more “well-rounded,” a spice in my life instead of the main ingredients and the recipe. I wanted to practice just enough to get rid of my gross dissatisfaction and pain, yet keep all the fun stuff in samsara. I wanted to ride the roller coaster of samsara but take the Dharma pill only when I was about to get sick!

I’ve been dealing with this by having compassion for myself. It has been scary thinking, feeling and behaving in relatively new ways, instead of my usual hazy “automatic” ones when acting and speaking, breathing and examining what’s going on internally.

I’ve seen that fear is related to attachment—specifically attachment to having control, knowing where things are going, that this guy sitting inside of me is running the show. When you start to sober up from this hallucination, you need some compassion for yourself.

Further, there has been enormous aversion to acknowledging the unsatisfactory experiences in my life. There are insane amounts of denial: “Aw, these meditations are so dramatic! My life … Well, sure there are problems, but overall, it’s alright. I just have to grin and bear some things.” However, I started to make an effort to be aware when this attitude started to pop up because it is completely unrealistic. Being honest with myself that the nature of my existence is unsatisfactory is not doom and gloom; it’s actually joyful. I can finally start to end these problems that keep recurring in this mindstream.

I realized that any time there is real discouragement in my practice (and I am somewhat aware of the first two noble truths), I’m not being aware of the last two noble truths. There’s a happiness, a contentment, that goes beyond the interwoven ordinary happiness and unhappiness I’ve experienced. It comes from knowing there is the possibility to cease this endless cycle of birth, aging, sickness, and death; the possibility to end the constant concern for myself where my wants and pleasures are most important and trump the happiness of countless beings who have benefited me with so much kindness for many eons. It’s going to take work—another thing that was causing a great deal of resistance to practice—to accomplish this. Nevertheless, it’s starting to dawn on me how worthwhile this is.

After reflecting on all of this, the resistance dissolves and I can practice. I’ve noticed some changes, and I want to sustain and deepen these. Instead of talking at length about this, however, I’d rather talk about what I need to focus on more because nothing I’m experiencing is novel or unique like I once thought. “Look at me, I’m having these experiences!” I am deeply inspired to know there are people—like those at the Abbey—who were once where I was and now are progressing. We really can transform our mindstreams!

I noticed yesterday at work when I learned a patient had died, that this sort of news still surprises me. How naïve we can be! Here is this man who has smoked nearly his entire life and is in the end stages of multiple illnesses. I’ve noticed several times how much his body is declining but part of my mind still thinks, “Oh, he’s not doing well. But death is some time off, maybe not far off like mine is, but it’s not today.” It’s always “mañana” isn’t it? Kind of makes me laugh.

Then I start to reflect on death, its certainty, and its unpredictability as far as when it will happen, and this puts my life in perspective. What am I going to do with this lifetime? Keep working a 9-to-5 job, maybe go on and get my LPN, then my RN, then my BSN-RN, etc.? Have a little family, keep chasing the fleeting pleasures I like? Keep getting into the same arguments, continue to work myself like crazy and get home only to crash on the couch? Practice some Dharma when it’s convenient or when I need to “broaden” my mind and “get in touch with myself”? Then finally approach death, whenever that is, totally shocked and unprepared?

This doesn’t let me grow in a way that is most beneficial for others and myself from the perspective of beginningless and endless uncontrollably recurring rebirths. Certainly, it doesn’t leave much room for ethical conduct or sustained meditation.

Or I could take some responsibility for my life. This is really what it’s about—finally, after all these lives, taking responsibility for how my behavior affects my experiences and how my self-centered attitude harms others. It contributes to this narrow perspective, and my mind becomes like a horse with obstructed vision running down the track: I never really consider others’ thoughts or feelings. For example, a few months ago I was talking to someone very dear to me. I realized I hadn’t really thought that others have feelings just like I do. Here I had been doing lamrim meditations on rebirth and really understanding that, but when I was interacting with other human beings, somehow my experiences were superior and more interesting than theirs. It’s kind of embarrassing, actually, and sad.

Returning to my behavior in my daily life … I know the way I think, act, and speak—regardless of my current practice—will probably continue to be unrestrained because the force of habits I’ve built up is so strong. The media and the people I’m around reinforce these habits. Most unnerving of all, I’m most likely headed for an unfortunate rebirth. I have a sneaking suspicion that once someone has one rebirth in an unfortunate realm, they probably follow in succession for quite sometime. It’s hard to create or produce positive karma as an animal or a preta. It’s pretty sad that I have the Buddha potential and I’ve spent a good amount of this life in front of a blue, glowing screen.

I know I need to be in an environment with fewer distractions, fewer objects that my disturbing attitudes arise in relation to. Some days I think I would love to live at the Abbey. However to do this, I’d have to transform (a) my fear of losing so much of what I know—my attachments and habits, (b) my behavior that acts mostly on mindless urges, impulses, and afflictions that sneak up unquestioned, and (c) my laziness, such as just sitting around zoning out with some entertainment, into courage—courage in knowing the path I’d enter will benefit so many migrating beings. However, knowing my mind, I have to approach this slowly and wisely and not push myself with a lot of “shoulds.”

Someone has offered me a ticket to visit the Abbey but she is in debt and I don’t feel it’s wise to accept her kind offer. Not only do I need to take greater responsibility for myself by paying my own way to the Abbey, it’s also very beneficial for my mind to stop spending resources to fan the flames of my attachment. For example, “I don’t have enough money for a ticket!” really means, “Well, I already spent the money on frivolous pleasurable things I like.” Instead, I can stop following my attachment and remind myself of my direction in life. When I do, then saving will be more meaningful. Actually, the time spent at the Abbey will also be more meaningful because I will have put my own resources, time, and effort into making a visit. Remembering the stories of people like you and how difficult it was to attain access to Dharma really sobers me up! 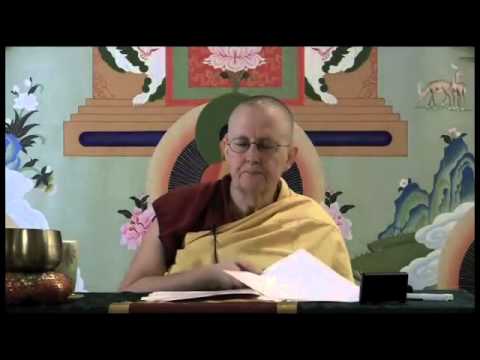 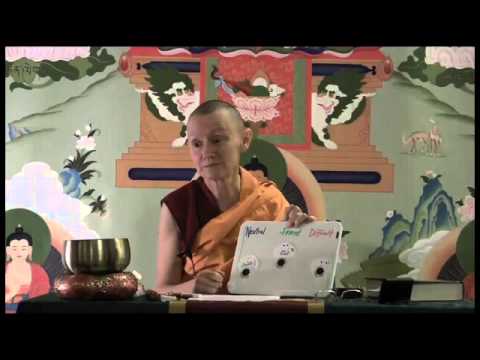 Seven-point cause and effect