I don’t know about you, but I frequently find myself indulging in my favorite pastime, complaining. Well, it’s not exactly my favorite one, because it makes me more miserable than I was before, but it’s certainly one that I engage in often enough. Of course, I don’t always see what I’m doing as complaining—in fact, I often think I’m simply telling the truth about the world. But when I really look carefully, I am forced to acknowledge that my woebegone statements are actually complaints.

What constitutes complaining? One dictionary defines it as "an expression of pain, dissatisfaction, or resentment." I would add that it’s a statement of dislike, blame, or judgment that we whine about repeatedly. Why say it once when we can indulge in our misery?

What do we complain about? You name it—we can complain about it. My flight has been cancelled. The auto insurance company refused to hear my claim. It’s too hot. It’s too cold. My dog is in a bad mood.

We complain about our wealth, or lack of it. I just saw a bumper sticker that said, "I’m too poor to vote Republican." Who ever has enough money? It’s not fair that others have more than we do and that they have better opportunities to earn it.

We complain about our health. This is not limited to just the ill and elderly. Those of us who are precocious start complaining about our body from day one. "My knees hurt, my back hurts. My allergies are acting up. I have a headache. My cholesterol is too high. I’m exhausted. My heart beats irregularly. My kidneys don’t work right. My little toe is infected."

One of the juiciest topics of complaint is others’ actions and personalities. We’re all like mental gossip columnists:

Complaining about political leaders and the government—not just our own, but others’ too—is a national pastime. We bemoan unfair policies, the brutality of oppressive regimes, the injustice of the justice system, and the cruelty of the global economy. We write e-mails to friends who have the same political views as we do and hope they will do something to change the situation.

In essence, we complain about anything and everything that meets with our disapproval.

Why do we complain?

We complain for a variety of reasons. In all the cases, we’re looking for something, even though we may not be aware of what it is at the time.

Sometimes we complain because we simply want someone to recognize our suffering. Once they do, something inside us feels satisfied, but until they do, we go on and on telling our story. For example, we may tell the story of a dear one’s betrayal of our trust. When our friends try to fix our problem, we feel more frustrated. We may even feel that they’re not hearing us. But when they say, "You must be very disappointed," we feel heard—our misery has been acknowledged—and we say no more.

At other times, it isn’t so simple. For example, we may repeatedly complain about our health out of self-pity or the wish to gain others’ sympathy. Others may show they understand, but no matter what they say or do for us, we are dissatisfied and continue to lament.

We complain to vent our emotions and our feelings of powerlessness. We criticize government policies, the corruption of CEOs, and the politicking of the politicians that prevents them from actually caring for the country. We dislike these things, but we feel powerless to change them, so we preside over what amounts to a court case—either mentally or with our friends—in which we prosecute, convict, and banish the people involved.

"Venting" is often used to justify ranting to whomever about whatever we want. One friend told me that he regularly hears people say, "I just have to vent! I’m so angry, I just can’t help it." They seem to feel that they will explode if they don’t let off some steam. But I wonder about that. Shouldn’t we take into account the consequences, for ourselves and others, of venting? In the Buddha’s teachings we find many other options to resolve our frustration and anger without spewing out on others.

What is the difference between complaining and discussing certain topics in a constructive way? It lies in our attitude—our motivation—for speaking. Discussing a situation involves taking a more balanced approach, in which we actively try to understand the origin of the problem and think of a remedy. In our mind we become proactive, not reactive. We assume responsibility for what is our responsibility and stop blaming others when we cannot control a situation.

Thus, we can discuss our health without complaining about it. We simply tell others the facts and go on. If we need help, we ask for it directly, instead of lamenting in the hopes that someone will rescue us or feel sorry for us. Similarly, we can discuss our financial situation, a friendship gone awry, an unfair policy at work, the uncooperative attitude of a salesperson, the ills of society, the misconceptions of political leaders, or the dishonesty of CEOs without complaining about them. This is far more productive, because discussion with knowledgeable people can help give us a new perspective on the situation, which, in turn, helps us deal with it more effectively.

For Buddhist practitioners, several meditations act as healthy antidotes to the habit of complaining. Meditating on impermanence is a good start; seeing that everything is transient enables us to set our priorities wisely and determine what is important in life. It becomes clear that the petty things we complain about are not important in the long run, and we let them go. 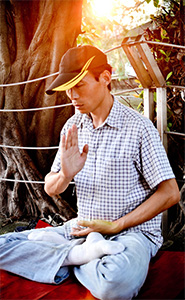 Several meditations act as healthy antidotes to the habit of complaining. (Photo by Ewan Jade)

Meditating on compassion is also helpful. When our mind is imbued with compassion, we don’t see others as enemies or as obstacles to our happiness. Instead, we see that they do harmful actions because they wish to be happy but don’t know the correct method for attaining happiness. They are, in fact, just like us: imperfect, limited sentient beings who want happiness and not suffering. Thus we can accept them as they are and seek to benefit them in the future. We see that our own happiness, in comparison to the problematic situations others experience, is not so important. Thus we are able to view others with understanding and kindness, and automatically any inclination to complain about, blame, or judge them evaporates.

Meditating on the nature of cyclic existence is another antidote. Seeing that we and others are under the influence of ignorance, anger, and clinging attachment, we abandon idealistic visions that things should be a certain way. As a friend always says to me when I mindlessly complain, "This is cyclic existence. What did you expect?" Well, I suppose that at that moment, I expected perfection, i.e. that everything should happen the way I think it should, the way I want it to. Examining the nature of cyclic existence frees us from such unrealistic thinking and from the complaining it foments.

In his Guide to a Bodhisattva’s Way of Life, Shantideva counsels us, "If something can be changed, work to change it. If it cannot, why worry, be upset, and complain?" Wise advice. We need to remember it when the urge arises to complain.

What can we do when someone incessantly complains to us about something we cannot do anything to change? Depending on the situation, I’ve discovered a few things to do.

One person I know is the chief of all complainers. She is melodramatic about her ailments, sucks others into her predicaments, and tries to turn all attention to her suffering. At first I avoided her, since I disliked hearing her complaints. When that didn’t work, I told her that she had nothing to complain about. That definitely backfired. Finally, I learned that if I earnestly smile and am playful, she loosens up. For example, in our classes, she would consistently be asking others to move because she was so uncomfortable. Since I sat directly in front of her, her complaints affected me. At first my mind recoiled with, "You have more space than anyone else!" Later, I became more tolerant and would joke with her about the "throne" she had made to sit on. I pretended to lean back and rest on her desk which edged into my back. She would tickle me, and we’ve become friends.

Another technique is to change the subject. I had an elderly relative who, whenever I visited, would complain about every member of the family. Needless to say, this was boring, and I was dismayed to see him work himself into a bad mood. So, in the middle of a tale, I would take something he had said and lead the discussion in another direction. If we were complaining about someone’s cooking, I would ask if he had looked at the delicious-sounding recipes in the Sunday paper. We would begin to talk about the paper, and he would forget his previous complaints in preference to more satisfying topics of discussion.

Reflective listening is also an aid. Here we take someone’s suffering seriously and listen with a compassionate heart. We reflect back to the person the content or the feeling he or she expresses: "It sounds like the diagnosis frightened you." "You were relying on your son to take care of that, and he was so busy he forgot. That left you in the lurch."

Sometimes we get the feeling that others complain simply to hear themselves talk, that they don’t really want to resolve their difficulties. We sense that they’ve told the story many times in the past to various people and are stuck in a rut of their own making. In this case, I put the ball in their court by asking, "What ideas do you have for what can be done?" When they ignore the question and return to complaining, I ask again, "What ideas to you have for what could help in this situation?" In other words, I refocus them on the question at hand, instead of allowing them to get lost in their tales. Eventually, they begin to see that they could change their view of the situation or their behavior.

But when all else fails, I return to my favorite pastime—complaining—when I can ignore their ailments and sink into the sticky slime of my own. Oh, the luxury of venting my judgments and airing my troubles!

Taking the vow of celibacy
This hit home