Venerable Hue Chuyen met Venerable Thubten Chodron while teaching at Pagoda Phat Hue in Frankfurt, Germany. He is an American monk and a disciple of the Abbot of the Pagoda, Master Thich Thien Son. The following is from personal correspondence and printed with permission.

Throughout the time we spent together, many things that you said to me really hit home. The Dharma made more sense coming from an American mind! 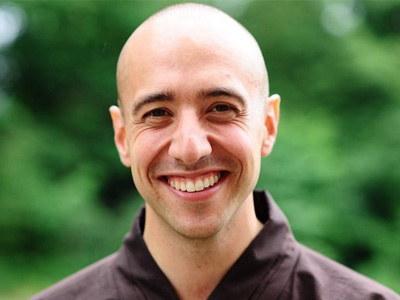 We’re good enough and we’re trying our best. What we’re doing is fine. (Photo by youretreats)

I think the insight that impacted me the most was when you mentioned driving on the highway at night and seeing the workers. We get angry because they are working on the road now and not later when nobody was on the road. (We don’t take into account that they wouldn’t want to work at 3 a.m. either, or that any time that they choose to work somebody would be on the road). At first I laughed at this because many times while driving home I encountered road work and the exact thought came to mind and I would verbally get angry. Never once did I consider their feelings or time frame. But the point really got to me when the day you left, we were all cleaning the Pagoda together. As I was going up the backstairs I saw somebody mopping them. I WAS ABOUT TO GET ANGRY THAT THEY WEREN’T DOING IT AT NIGHT! And then I remembered what you said, and realized that I wouldn’t want to be working at night either and that this was the time to clean the Pagoda. So I simply turned around and went up the other stairs, avoiding unnecessary conflict.

Also, the exercise where you had us practice being content by telling ourselves we are "good enough" really helped me. The first time I said to myself, "You are good enough and you’re trying your best. What you’re doing is fine," I suddenly remembered all this great stuff I had done the day before. Before that, I had been completely lost in negative self-feeling, and saying that I was good enough only this one time suddenly brought back memories of the good I had done. I could see how I pick and choose my reality to fit my often negative self-image and not take myself as the whole.

Antidotes for the complaining mind
Humor