The Eight Dangers 07: The snake of jealousy, part 1 (download)

The snake of jealousy:

Lurking in its dark pit of ignorance,
Unable to bear the wealth and excellence of others,
It swiftly injects them with its cruel poison:
The snake of jealousy—please protect me from this danger!

“Unable to bear the wealth and excellence of others.” So that’s what jealousy is. It’s the mind that is unable to bear anything good happening to other people. It’s jealous, it’s envious, it says, “They shouldn’t have it, I should have it. And I’m going to do what I can to get it away from them and take it myself.”

And jealousy is so painful. Isn’t it? I mean, really painful. Because it completely contracts our hearts. Here we pray “may all sentient have happiness and its causes,” and they have some good condition and we say, “I can’t stand it!” Yes? So it’s completely the opposite of the four immeasurables and what we’re trying to cultivate in the four immeasurables. And it’s incredibly painful.

And then motivated by jealousy we do and say all sorts of amazing things, don’t we? I mean, think of how many crimes are created out of jealousy. How much confusion in relationships is created out of jealousy. In an office place, in a workplace, colleagues getting jealous of each other and, “They got the promotion, I should have it … the boss smiled at them, the boss didn’t smile at me … I do all the work, but they get all the credit..” You know? So a lot of jealousy in office situations. Even in Dharma context. “I drove the high lama around.” And then everybody else goes, “Ohhh, look at them, they’re so arrogant about it, I should be able to drive the high lama around, they shouldn’t be allowed to, look at them they’re such disgusting people.” So we get so jealous…

I mean, I even remember around my teacher people would get jealous of the person who brought in the tea. It’s like, “He asked me to bring the tea, get out of here … I’m bring the tea, you don’t get the privilege of bringing Rinpoche the tea … I’m working for the benefit of sentient beings, get out of here!” [Laughter]

It’s really a very vicious mind. A snake is a good analogy for jealousy, isn’t it? I think even in the West don’t we associate snakes often with jealousy? Sometimes with anger. But we do with jealousy. So really, kind of, a horrible mind. “Unable to bear the wealth and excellence of others.” We sit there just with this evil mind that wants to criticize and pick faults and put others down. “They’re better than me, I can’t stand it.” You know? Some way to make our own selves feel good.

And even we harm others and take their goodness away from them, or trash their reputation—or kick them out of the driver’s seat and hijack the car… [Laughter] You know?—we still don’t feel good afterwards. We got what we wanted, but the way we got it doesn’t feel good.

We have to really watch this mind of jealousy and stop it when it starts to arise. Because it says, “it swiftly injects them with its cruel poison.” And that really is—I mean, that’s what a snake does, but that’s what jealousy does. I mean, we poison people’s relationships, we poison their qualities. So it’s really quite a detrimental mind that is against the basic Dharma values that we really hold precious.

For our own sakes, out of our own sense of integrity and self-respect we want to release this mind so that we can really live and follow the Dharma values that we cherish. 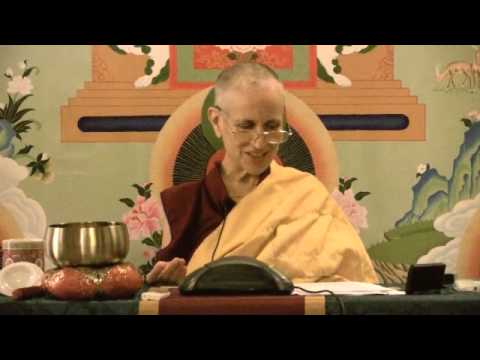 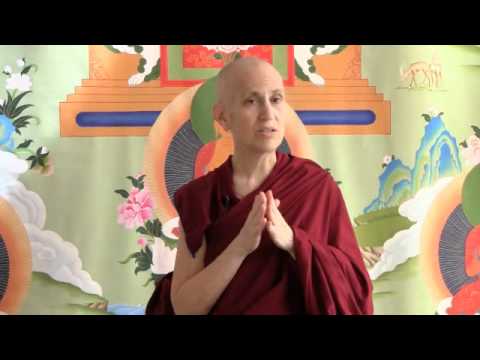 Rejoicing in the happiness of others