An incarcerated person in the 13th year of a 20-year prison sentence reflects on the loss of his best friend.

Since the last time I wrote you, my best friend died. He had a brain aneurysm that burst and was in a coma for a couple of days. At first I was fairly stunned and shocked. Bill was in good shape and didn’t smoke or drink. I’m glad that he didn’t suffer, that it was quick and not painful. My heart aches for his wife and family. I cried the first couple of days and since then it’s been getting better day by day.

I have known Bill for nearly forty years. We became good friends in the 80s, and when I was arrested in 1990, he was one of the very few people that didn’t abandon me. His friendship was truly rare and special and I will miss him for the rest of my life. 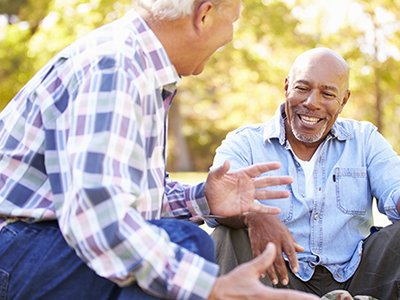 When someone you love dies, instead of being sad, rejoice that they were part of your life.

But in the days after he died, while I was deep in reflection and remembering, I was able to see through the loss and grief. He wouldn’t want people crying over his death, so I put that behind me.

The thing that stands out clear to me is that death is simply a part of life. When the time comes and someone you love dies, it is just the natural progression of life. Instead of being all bummed out about him being gone and all the plans that we had to do things once I got out, I’ve found solace in the fact that this good and decent human being was an important part of my life for many years. Instead of being upset that he’s gone, I’m very thankful that I had the opportunity to know him. Friends like him are so few and far between. Chances are I will never know another man of his ilk and that’s okay.

I knew him, and he died knowing that I loved him and valued his friendship, because I used to tell him and his wife how much they meant to me. That was a lesson I learned after my dad died. I never told him how much I loved him, and I didn’t have the chance to when he died. That messed me up for a long time. So now I tell the people I love and who are important to me what I felt for them. There is no ambiguity. I like it that way. And since I’ve come to prison, I’m better at telling people.

Growing through the Dharma
Losing a dear one who was young